Quebec's cinematic multithreat, Xavier Dolan, will get his own double bill at this year's Toronto International Film Festival, as the writer-director of one film and star of another.

Dolan's drama, Mommy, about the troubled relationship between a single mother and her disturbed teenaged son, which shared the directing prize at Cannes in May, will screen as a Special Presentation. The 25-year-old Dolan also stars in the English-language psychological thriller, Elephant Song, based on Nicolas Billon's play, which had its debut at Stratford in 2004. He plays a manipulative psychiatric patient in a power struggle with his doctor (Bruce Greenwood). The film, directed by Charles Binamé (Seraphin: A Man and his Sin), also stars Carrie-Anne Moss, Catherine Keener and Colm Feore.

Dolan's films were among 25 new Canadian features, along with 42 shorts in the Shortcuts Canada program, and other homegrown works announced in advance of next month's festival (Sept. 4-14). The 39th TIFF will see the return of a number of familiar names, including Denys Arcand, Sturla Gunnarsson, Ruba Nadda, Alanis Obomsawin and Jacob Tierney in programs across the festival.

The Oscar-winning director Arcand (The Barbarian Invasions) brings his infidelity drama and thirtysomething social portrait, An Eye for Beauty, starring Éric Bruneau as a Montreal architect who has a life-changing fling with a Toronto woman. (The film opened in Quebec last May.) Director Nadda (Sabah, Cairo Time) brings October Gale, with Patricia Clarkson as a grieving doctor in an island cabin who discovers an unconscious, wounded man in a canoe. Rounding out the five Canadian films in the Special Presentations is Jacob Tierney's comedy, Preggoland, a comedy starring Sonja Bennett as a woman who begins to enjoy the social perks of pregnancy without the biological reality.

Canadian documentary titles include Sturla Gunnarsson's Monsoon which focuses on the weather system that unites the cultures of India. The Price We Pray from Harold Crooks (The Corporation, Surviving Progress) exposes corporate tax chicanery and The Wanted 18 (Amer Shomali and Paul Cowan) uses stop-motion animation and interviews to recount the improbable activist role of a herd of Palestinian dairy cows. In the Masters program, Alanis Obomsawin (Kanehsatake: 270 Years of Resistance) brings her latest documentary, Trick or Treaty?, which follows a campaign to raise awareness in Native communities about the history of agreements with the Canadian government.

Five Canadian films are in the festival's largest program, Contemporary World Cinema, including Stéphane Lafleur's black-and-white coming-of-age film, Tu dors Nicole, which screened in May at the Cannes' Directors' Fortnight to warm reviews. Other entries include: Maxime Giroux's inter-ethnic romance, Félix and Meira; Andrea Dorfman's songwriter saga, Heartbeat and the new film from Rodrigue Jean, whose 2008 film, Lost Song, won TIFF's best Canadian feature film award. Jean's Love in a Time of Civil War is set among drug users and sex workers in Montreal's Centre-Sud district. The program also includes Teen Lust, the fourth feature from Blaine Thurier (also keyboardist for the rock band the New Pornographers), about a student who's keen to lose his virginity before his parents and their satanic cult sacrifice him to the devil. There are 10 Canadian films in the "promising directors" Discovery program, including Adam MacDonald's Backcountry, Jeffrey St. Jules's Bang Bang Baby, Jefferson Moneo's Big Muddy, Matthieu Denis's Corbo, Pat Mills's Guidance, Albert Shin's In Her Place; Kris Elgstrand's Songs She Wrote about People She Knows; Kyle Thomas's The Valley Below, Jordan Canning's We Were Wolves and Lindsay Mackay's Wet Bum, There's one Canuck entry in the typically outré Midnight Madness genre program. The Editor, directed by Matthew Kennedy and Adam Brooks, is about a once great film editor (played by director Brooks), left with wooden fingers after an accident, who becomes the chief suspect in a series of murders. The cast includes German cult star, Udo Kier, and uncensored American star, Paz de le Huerta, of Boardwalk Empire and Enter the Void fame.

Other Canadian works at this year's festival are Lynne Marsh's three-channel video installation, Anna and the Tower (at the Scrap Metal Gallery) as part of Future Projections, and four Canadian short films as part of the experimental Wavelengths program. In addition, TIFF Cinematheque will offer retrospective screenings of Atom Egoyan's Speaking Parts (1989) and John Paizs's Crime Wave (1985). David Cronenberg's Maps to the Stars was previously announced as one of this year's gala presentation. 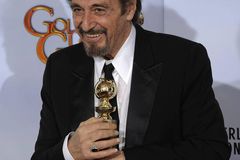 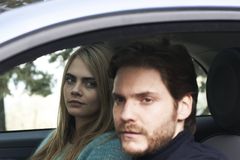 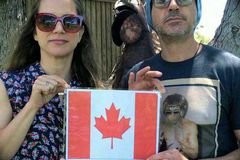 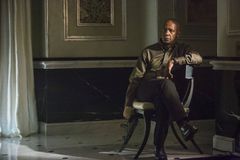 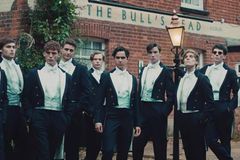