Now you can add the two Barack Obama biopics to this improbable run of industry timing. Yes, 2016 has somehow delivered two films about Obama's pre-POTUS days – all while the man is still sitting in the Oval Office, no less. Last month, Richard Tanne's Southside with You offered audiences a romcom spin on Barack and Michelle Obama's relationship, chronicling their first date in Chicago back in 1989. And this week, the Toronto International Film Festival hosted the world premiere of Barry, Vikram Gandhi's unofficial Southside prequel, which focuses on Obama's junior year at Columbia University in 1981.

The fact that there are two movies about a sitting U.S. president poses a host of problems, especially in an ultradivisive election year; don't they give off a slight cult-of-personality whiff? Unavoidably, yes – and if you wanted to stretch the argument, you could program a subversive triple bill of Obama's life, starting with Barry, then Southside with You, and concluding with another TIFF selection, Snowden – though that last one's focus on Obama's national-security philosophy is not nearly as cute as the preceding films.

But in Gandhi's view, his film is less a story about commander-in-chief Barack Obama than one about a confused and socially isolated college student who happens to be named Barry Obama.

"I just wanted to get into the mindset of a kid named Barry, otherwise you're backtracking and trying to create a causality," says Gandhi, the day after the film's TIFF premiere. "What was interesting to me was, what was Barry going through at that time, as a mixed-race man finding himself at college? We know how the story ends, so it's about what's inside that person then."

Indeed, for Gandhi, the film simply uses Obama as a familiar (and undeniably marketable) anchor to explore a much less-chronicled theme in American cinema: that of racial identity, and how one defines oneself in a culture that is obsessed with demarcating such divisions. "Being mixed race, it's an identity that's becoming more and more common in America. I wanted to tell a story about a mixed-race kid's experience trying to understand himself," Gandhi says.

To that end, the film finds Barry (played here by the novice Australian actor Devon Terrell, in a remarkable bit of mimicry) flirting with both white and black culture in New York – shifting uneasily between the world of his liberal white girlfriend (Anya Taylor-Joy, playing a composite character) and the basketball courts and housing projects of Harlem. As he struggles to become less of "an invisible man," Barry slowly finds self-acceptance as someone who bridges both worlds, and (spoiler alert, I suppose?) embraces the first name we all now know so well.

In this way, Barry finds itself exploring the complex themes of race and self-identity that so many other TIFF films seem to pivot on this year, including Moonlight, Loving, A United Kingdom, I Am Not Your Negro, the shrouded-in-controversy The Birth of a Nation, even The Magnificent Seven.

"I do think that audiences are asking for a wider range of stories that reflect a wider range of experience, and this has to do with a shift in the culture," says Cameron Bailey, TIFF's artistic director. "You can see it in social media, in people looking for reflections of their own lives more in the culture they consume. As a result, the companies that make the movies, and the artists, are finally responding."

That was exactly Gandhi's goal – the President just happened to make a good hook. And if the director is worried about any similarities to Southside with You, he's at least hiding it well.

"I knew about [Southside] from the start, but it just seemed like a totally different movie," he says. "I wish the timing was different, but only because I could've watched it and learned from it. I still haven't seen it yet, because the only thing I've seen for the past year is Barry."

Actress Tika Sumpter on playing Michelle Obama in Southside with You
August 25, 2016 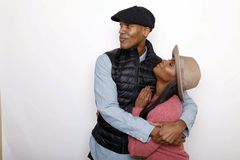 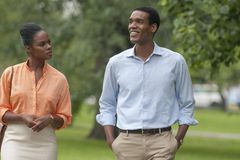 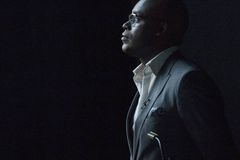