Johanna Schneller
Special to The Globe and Mail
Published September 14, 2012 Updated May 8, 2018

Inescapable, the new thriller from writer/director Ruba Nadda (Cairo Time), is an old-fashioned nail-biter set in the up-to-the-minute turmoil of Damascus, shot in Johannesburg on a Canadian – as in tiny – budget. (It opened in Toronto yesterday and distribution will expand next week.)

To make it, Nadda had to cram a big old plot – a Syrian/Canadian businessman named Adib (Alexander Siddig, also from Cairo Time) confronts his secret past as a resistance fighter when his daughter goes missing in Syria – into a 25-day shooting schedule. There was so little wiggle room, she says, that she "had to fight every day, for every single five minutes." The actors did their own stunts, and each action scene was shot in one take because they couldn't afford to demolish things more than once. The players had to know their parts cold and give them all they had. Over the past week at TIFF, I talked to three of them.

Marisa Tomei looks delicate, tired, wary. As she talks, her hands are constantly in her hair – she rakes it upward from the temples, folds half of it over the over half, twists it into a bun. She plays Fatima, Adib's ex-fiancée, who still smolders with love and bitterness, but also knows that helping him is the right thing to do. "We got back in March, and I have not recovered, frankly," Tomei says. "I haven't wanted to work. It really took it out of me, on a lot of levels."

Though she loves the movie, the experience was sometimes fraught. She became emotionally involved with the plight of women in Syria. She'd wanted to go there on a research trip, but was talked out of it and had to settle for Beirut, only to "come up empty" in terms of finding women to draw from. Luckily, she met a Syrian woman in Johannesburg whose gestures and speech she emulated; she still has videos of the woman on her phone.

Tomei tends to take her characters' pain home – "So I'm told," she says, laughing darkly – and this was no exception. "Ruba sold this role to me as, 'Fatima's feisty, she's outspoken,' but for many reasons, she cut those pieces out," Tomei continues. "I'm talking passionate kisses, Adib telling Fatima he never stopped loving her, Fatima rending her clothing in despair, high-pitched curses in Arabic. And the way I relate to those scenes being cut – in a small way, that's what happens to the women there. The big stuff gets crushed, suppressed. You can still smell it in the film, but you're not allowed to express it. The women there were given an education, then had it taken away; given a voice, then had it taken away. So now I've experienced that to a tiny degree. I feel for our sisters there. This film packs a punch, and I am still reeling."

I tell her I admire her work of late, in films like Cyrus and The Wrestler. Though her roles aren't the leads, she makes the characters indelible. Does that satisfy her? "No," Tomei says, gazing at me like I'm nuts. "I'm looking for the lead. But I do what I can."

Alexander Siddig, hazel-eyed and ludicrously handsome, wears a suit jacket well and speaks in a British accent so seductive that it releases endorphins in my body. He's full of gracious yet mischievous praise for Nadda and the "twisted, aborted, Munch-ian affair" that she wrote. "Ruba's a romantic, but she's brutally unsentimental," he says. "She doesn't indulge in the kiss, the [sex scene], the things men generally can't help themselves but include. She's really in charge of her material, but she doesn't give that impression, which I adore. Because she's a kind of snake." His eyes twinkle. "You have no idea how smart she is until she's on you."

Siddig is aware that Inescapable will be compared to more propulsive entertainments such as Frantic, Taken and his own Syriana). That's one of the reasons he agreed to do it. "I had a responsibility to men," he says. "Men are often horribly misrepresented on film. We're not as capable as movie characters, and that emasculates us. Those butch men are as untrue as skinny models are to most women."

So he convinced Nadda to let him lose his fistfight in the film, and is proud that, though Adib knows how to use a gun, he would rather not.

"I needed to not betray the man, the father," he says, "because when kids dream of what their fathers should be like, it should be someone in the ballpark of a real human being. It's not a moral trip. I just can't compete with Liam Neeson or Harrison Ford." (I beg to differ.)

Joshua Jackson has a face you can't help but love, and most of the time he uses it for good. Until now. "That was my attraction to this character," he says, referring to Paul, a Canadian diplomat who's entangled with Adib and whose motives remain ambiguous until the final scenes. "I see a lot of scripts, and even the well-written characters usually go only from here to there." He draws an arc in the air. But then he sends his finger off on a surprise trajectory. "Paul gets an entire other direction. He's boyish in the beginning, then he tries to cover his ass and try to get away with whatever he can, and then, when the situation spirals out of his control, instead of making a weak or childish choice, he makes a more interesting and difficult one. It's his passage into manhood."

Jackson made his own passage look easy, moving from the teen soap Dawson's Creek to his current sci-fi series Fringe; and from what he claims was "a massively irresponsible 20s, where I was ornery, obnoxious, cocky, irreverent," to the thoroughly smart and charming guy he is now. As well, he went from "leaving no stone unturned" to a long-term relationship with the actress Diane Kruger.

His character, like the others , faces a test: Will they act in their own self-interest, or against it to bring about a greater good? When I tell Jackson I've seen that dilemma in a number of TIFF films, he's not surprised. "We came out of such a tremendously frivolous age in the aughts," he says. "Endless money, endless fun, endless reality stars. Values and worth got placed onto things that are at best ephemeral, but mostly useless and unhelpful.

"The hangover from that seems to be that we have to face all the responsibilities that we've been shirking, all at once. I think that'll be the zeitgeist in filmmaking for the next several years, as that poison runs through the system. Hopefully we'll learn that: Even though we all run from difficult decisions, the empowerment that comes from having made them is actually much more fulfilling than being able to get away with not making them."

Ruba Nadda’s Inescapable shines a timely spotlight on Syria
May 8, 2018 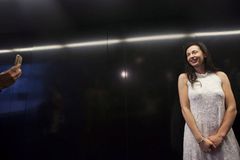 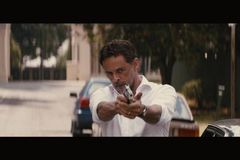 Love story or political thriller? Inescapable is both, Ruba Nadda says
May 8, 2018 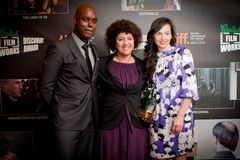