For acclaimed Indian playwright turned filmmaker Anand Gandhi, the best place to escape Bollywood is right at its centre, in bustling Mumbai, willfully ignoring the latest commercial releases. "I don't know anything about them," the 31-year-old director says with a wave of his hand and a toothy grin. "I don't watch them. I try to avoid looking at the posters when I step out of my house. I try to keep it completely out of my field of vision."

Instead, his highly independent first feature, Ship of Theseus, showcased in the Toronto International Film Festival's program City to City: Mumbai, examines the other sides of India's most populous city. The daily struggles of a blind artist, the ascetic routines of an ailing monk, a stockbroker coming into contact with the illicit trade in human organs: Gandhi uses these to illustrate how the chaos of Mumbai serves as an elaborate system of cause and effect, one life impacting another. The stories are fiction, but they are really philosophical essays rendered on the screen.

One scene in particular spells out Gandhi's approach.

A young man is striding down a Mumbai street, debating the nature of karma and causality with the barefoot, ailing monk. Their philosophizing is rapid, like their walking pace, like the camera trying hard to keep up. The two are parsing the entire basis of cause and effect, and the scene serves as a didactic interlude within the larger film. But it's clear, talking with the director in Toronto, that the characters' words are actually Gandhi's own internal running dialogue on karma and the nature of art.

"I think that's where the job of the artist and the philosopher comes in today, the job of the filmmaker, the job of the writer, the job of the artists," Gandhi says, speaking, by the way, rapidly. "In today's time, it's more relevant because science is putting out so much data, so much information that we are producing every day, that we don't have time to assimilate that data and put it together in a meaningful way. That's what I find my role to be. I feel it's my responsibility as an artist."

Given the film's intellectual pace and clear-eyed interest in a world unadorned, Ship of Theseus will find its home in festivals and art houses, although co-producer Fortissimo Films sees a growing market for this kind of intellectual Indian cinema.

"Everyone has to look past Bollywood," says Fortissimo's Michael Werner, who is also in Toronto, to sell the film to distributors internationally. "We all love and appreciate Bollywood cinema. But the audiences, the critics and the festivals are looking for a different kind, a unique kind of cinema coming out of India. There are a lot of unique voices and filmmakers who have something to say and want to present it in a different way. We're all on board this journey together, and we're helping to develop that new marketplace."

Entering the festival, the producers are hoping to secure international sales as well as shore up a distribution deal within India, where the film is expected to play major cities, given the director's solid reputation as a playwright. Alongside other Mumbai-based films featured in the festival's City to City program, from the hard-edged Gangs of Wasseypur to the spiritually minded The Bright Day, is a feeling that a new push in independent Indian filmmaking may be emerging. "It's just developing. There may be a community in spirit, but people are competing for financing, competing for eyeballs, competing for festival space. I would say these are filmmakers who want to express themselves in different ways than, say, the mainstream filmmakers in India," Werner says. "I think everybody is just finding their way."

Ship of Theseus was made over four years, with friends helping when they could. Young Egyptian filmmaker Aida El-Kashef plays the blind photographer, even though, for a stretch there, Gandhi lost contact with her – only to find out she had been arrested during an Egyptian protest. The filmmaking process itself began to mirror themes within the film, with one life impacting another; and a lot of the questions the movie poses originated during a year in which filmmaker Gandhi nursed his ailing grandmother in the hospital – an experience he wrote directly into the stockbroker's storyline.

"All these academic ideas, all these very simplified versions of reality collapsed for me at that time," he recalls. "I had to find a new model for finding meaning again. I'm definitely still searching."

TIFF movie review: Ship of Theseus
September 6, 2012
Salman Rushdie gets back to his day job
September 1, 2012 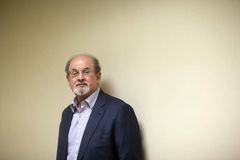 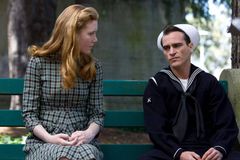