For just the third time in its 34-year history, the Toronto International Film Festival has chosen a non-Canadian film - Jon Amiel's Creation , about the life of Charles Darwin - to open the 10-day event.

The move has sparked debate among this country's filmmakers who sought assurances yesterday that the giveaway of the opening-night slot to a foreign film will be the exception, not the rule.

Toronto distributor Hussain Amarshi said he found the decision to kick off the festival with the film from Britain, "Quite strange and I must say I'm quite disappointed it's not a Canadian film." The veteran distributor and president of Mongrel Media added it's the first time in 12 years (when America's Fly Away Home opened the festival in 1996) that TIFF has diverted from its traditional model of showcasing Canadian features at the opening night gala at Roy Thomson Hall. (Prior to that, another U.S. film, In Country , directed by Canadian Norman Jewison, opened TIFF in 1989.) "Does Canada's premiere Canadian festival, not opening with a Canadian film, signal we don't have the right film for this slot this year?" Mused Amarshi, whose Canadian-made features Cairo Time and What's Cooking, Stella? are both likely to premiere at TIFF galas this year, among other titles. "The thing is that there has always been this unspoken understanding that opening night is a Canadian film. If they're opening it up to any film from around the world, then it better be the best film out there."

At a press conference yesterday, TIFF co-director Cameron Bailey announced almost two dozen galas and special presentations and explained the prime-time placement of Creation as the result of two things: "We [Bailey and TIFF CEO Piers Handling]fell in love with this movie, and we felt it was the one that set the tone to have the kind of conversations we hope will happen around the film fest."

Later, Bailey also debunked any theories that the indigenous pickings were slim this year for the opening-night slot.

"We're as committed as ever to Canadian films, but we wanted to find the right choice for Opening regardless of where it came from," said Bailey, who will announce the Canadian lineup of films at TIFF on Aug. 4. "In the end, we fell in love with Creation . It's both an intimate story within a marriage and a film of big ideas."

Billed as part ghost story, part psychological thriller and part love story, Creation was co-produced by Recorded Picture Company ( The Last Emperor and Sexy Beast ), and stars Paul Bettany as Darwin and Jennifer Connelly as his wife, Emma (the actors are also a couple in real life). The script was penned by John Collee ( Master and Commander ).

Yesterday, Brian Anthony, national executive director of The Directors Guild of Canada, said he was unfazed by TIFF's opening night call. "I don't think we should cleave to the notion that the festival opens with a Canadian film all the time, on the understanding that this is the exception, not the rule."

Still, Anthony added he was a bit disappointed there was no Canadian component to TIFF's opening press conference. "I know they do it separately, but it nags me a bit. Regardless, I'm of a sunny disposition and I'm going to adopt a wait-and-see attitude until I see what the Canadian offerings are."

Yesterday, Toronto producer Daniel Iron (who co-produced Cairo Time as well as the upcoming drama, The Bang Bang Club ) pointed out that, from a distributor's perspective, weekend galas are often a better platform (to sell the distribution rights to a film) than opening night.

"I'm not that bothered by TIFF's decision vis-à-vis Creation ," said Iron of Toronto's Foundry Films. "What would bother me, however, is if - when more gala slots are announced - there were fewer Canadian names on the docket."

Handling told the press, "We will have exactly the same number of Canadian films in the festival that we always have. Our commitment to Canadian film remains unshaken."

In other TIFF-related news yesterday, Handling added TIFF is "cautiously optimistic" they will meet their targets to raise $196-million to build its new home, Bell Lightbox, and is focused right now on raising the $44-million required to operate the facility. Handling said effects of the global recession are forcing big cutbacks in the world of film and could also hamper independent filmmaking for years. He said sponsorship funding is down from previous years, meaning cuts to travel and entertainment budgets. 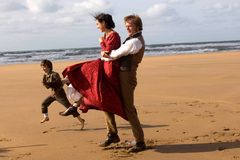