Sarah McCarthy didn't set out to make a film that would influence international adoption, but now she is hoping that her new documentary, currently showing at the Toronto International Film Festival, can do just that.

Called The Dark Matter of Love, it is hardly what you would call a political film. Instead, it focuses on a Wisconsin couple who adopt three children from Russia, 11-year-old Masha and a pair of five-year-old twins, Marcel and Vadim. The film chronicles the family as they adapt to their new lives and, through the research of Dr. Robert Marvin, examines how emotional bonds are formed and asks if and how love can be learned.

"I wanted to understand how the effects that the way you interact with your child has on their personality development and the way that they negotiate their friendships and their romances for the rest of their lives," McCarthy says. But since the film's completion, political developments have compelled McCarthy to tackle a much broader issue.

Last December, the Russian parliament passed a bill banning Americans from adopting Russian children. The move, observers say, was made in retaliation for Washington calling for sanctions against Russians deemed to be human-rights abusers.

The ban has left approximately 300 "pipeline children" – so named because their adoptions were in the works at the time of the ban – waiting to see if they will ever be placed with the parents who wish to adopt them.

McCarthy hopes the film will raise awareness about the plight of these children and that prospective adoptive parents in Canada, who are not affected by the ban, will step in and adopt them.

"All these kids want is a mom and a dad. They think about that every day and every night," McCarthy says. "We've been using the film to advocate for these 300 kids."

There are more than 700,000 children in Russia without parental custody, according to UNICEF.

Each year, between 1,500 and 2,000 children from foreign countries are adopted in Canada, with about 100 to 200 usually coming from Russia. Given the political tensions between Russia and the United States, many prospective parents of pipeline children have lost hope of ever adopting them. Instead, says McCarthy, "most of the families I am working with are actually looking to Canadian families now to adopt [the children they were hoping to bring home]."

One U.S. couple, Joe LeBlanc and Mercedes Arrieche, were expecting to bring home an 18-month-old girl named Svetlana when the Russian ban was announced.

The couple is "heartbroken," McCarthy says, but happy to know that the child is going to a family in Canada.

"Once that happened, some of the other families found out about this and thought, 'Maybe we can get our kids adopted in Canada, too,'" McCarthy says.

At least one Canadian family, who the filmmaker does not wish to identify for fear that doing so might adversely affect the process, is working to adopt pipeline children thanks to press around the movie, McCarthy says.

McCarthy hopes that screening the film at TIFF will help to secure a U.S. distribution deal in time to show it theatrically during the Olympic Winter Games next February in Russia, when the world's attention will be on the country.

The final TIFF screening of The Dark Matter of Love is Sept. 13 at 5:45 p.m. at the Scotiabank 3 Cinema.

Canada urged to take a stand in U.S.-Russia spat over corruption, adoptions
January 1, 2013 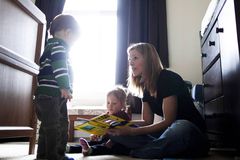 One sure consequence of disaster: adoption
February 6, 2010
Follow Dave McGinn on Twitter @Dave_McGinn
Report an error Editorial code of conduct
Due to technical reasons, we have temporarily removed commenting from our articles. We hope to have this fixed soon. Thank you for your patience. If you are looking to give feedback on our new site, please send it along to feedback@globeandmail.com. If you want to write a letter to the editor, please forward to letters@globeandmail.com.
Comments