LAINEY LUI
Toronto
Special to The Globe and Mail
Published September 11, 2012 Updated May 8, 2018

Two years ago in The Globe and Mail, I reported on the new romance developing between Canada's sweetheart, Rachel McAdams, and British actor Michael Sheen when he was at TIFF to promote his film Beautiful Boy.

Back then, I saw them together at Cheval, adorably awkward and hesitant, the way two people are at the beginning of a relationship. I saw them again this past week on the second anniversary of their coupledom, this time at the Hugo Boss/GQ sponsored celebration for McAdams's To The Wonder. The freshness of their romance has been replaced by familiarity, but it's no less appealing.

This time, it was Sheen in a supporting role, as he has no official reason to be at the festival but to be at her side. He was pulling chairs together for her family and making wine runs to the bar as she sat in the VIP section talking to well-wishers and eating lobster poutine. (You will never see anyone eat poutine so elegantly.) Later on, they posed for pictures for a mom or auntie type and kissed.

That same evening, over at Storeys, Gerard Butler made a surprise appearance at the after party for The Iceman. His presence was like a bat signal for every woman in the building wearing something tight and short. One minute it was a regular scene, the next I found myself in a music video being shot in Las Vegas.

TIFF is top-heavy and generally slows down after the first weekend. It was the same over at Soho House for the last of the private club's popular late-night lounges. Bill Murray, Olivia Williams, Imogen Poots and David Cronenberg were all there briefly, but by the time I arrived, the celebrities had almost all cleared out leaving behind Soho House's "Under 27" clientele. Hilariously, I heard that the only famous person still around was "some random hockey player model dude" on the second floor. It turned out to be Sean Avery.

On Tuesday afternoon, I interviewed Daniel Radcliffe at Kew Beach for ETALK. Radcliffe is in Toronto shooting The F Word, but has stayed away from the festival circuit even though his Harry Potter co-star Emma Watson presented her new movie, The Perks Of Being A Wallflower, at TIFF. Radcliffe told me that he did not attend the premiere because he did not want to take away from her moment and turn it into a Hogwarts reunion. Radcliffe also said he has been too busy working to see any films. When I asked him which ones he was most interested in, though, ever the loyal friend, he answered Watson's Perks and Ryan Gosling's The Place Beyond The Pines.

And finally, celebrities aren't necessarily cinephiles, especially not if they haven't seen each other for a while. Here's one from a few days ago that's worth telling. The Newsroom's Olivia Munn flew in to visit her boyfriend, Joel Kinnaman, who plays the new Robocop, currently shooting in Toronto. They were seated next to Kinnaman's co-star Gary Oldman at the Princess Of Wales theatre for the screening of The Master, said to be a strong contender for Oscars. According to a source, the two were apparently so happy to be reunited, they started kissing as soon as they took their seats, kept going through the introductions, continuing well into the first part of the movie and then spent the rest of the time touching. (For the record, Oldman didn't seem bothered and was really into the film.) By the end of the film, Kinnaman was so excited he fired up his electronic cigarette while still inside the theatre. Well, everyone has been saying that The Master is rather intense.

Lainey Lui is a reporter for CTV's ETALK (weekdays, 7 p.m. ET) and gossip blogger for LaineyGossip.com.

Rachel McAdams is bewitching and bewildered on the red carpet
May 8, 2018 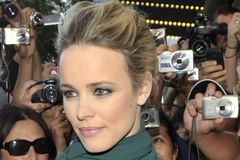 TIFF movie review: Passion
June 19, 2017
Follow us on Twitter @globearts Opens in a new window
Report an error Editorial code of conduct
Due to technical reasons, we have temporarily removed commenting from our articles. We hope to have this fixed soon. Thank you for your patience. If you are looking to give feedback on our new site, please send it along to feedback@globeandmail.com. If you want to write a letter to the editor, please forward to letters@globeandmail.com.
Comments