Cockails were called for 8, dinner was at 9. Some time after 10: Jeremy Irons began to start talking about the peculiarities of getting randy in the movies.

Not a bad way to lug out the fourth last-night of TIFF.

“The camera is a stand-in for the audience,” Irons was saying. An effective sex scene is one in which, in other words, the person watching is an avatar for at least one person in the assignation. The Oscar, Emmy and Tony winner was referring, in particular, to his 1992 film, Damage, in which “there were eight carnal moments” with co-star Juliette Binoche, and the lust unfurls in a way that “you could go to Mars … you could go to the bottom of the ocean.”

At which point, a dear woman behind me sighed the sigh of a million avatars. 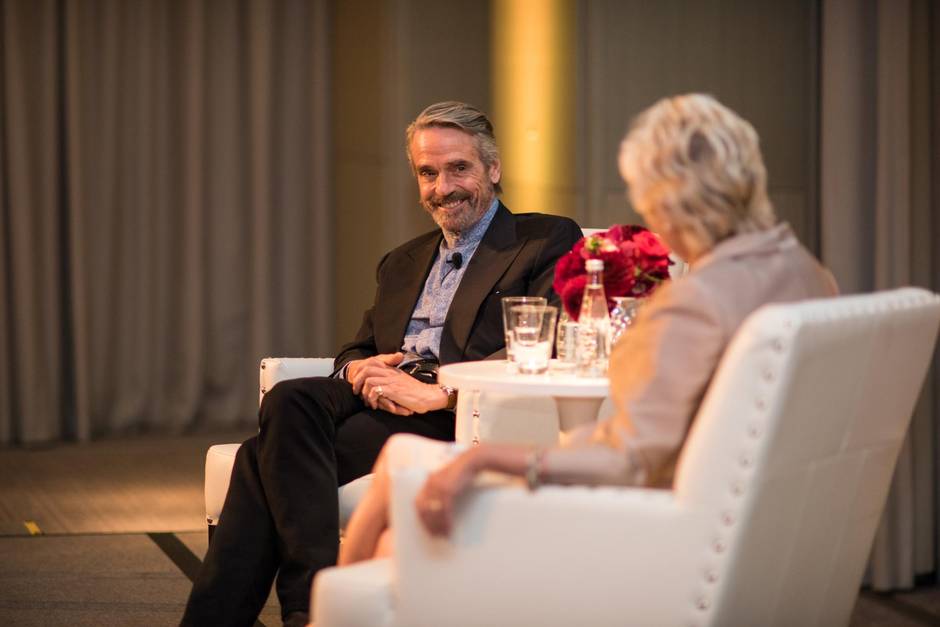 Irons, who has two films at the Toronto fest, had come to both elucidate and evoke at an affair presented by Credit Suisse, and hosted by legendary editrix and buzz-churner Tina Brown, formerly of Vanity Fair, Tatler, The New Yorker and The Daily Beast.

Held inside a ballroom at the Four Seasons – where deeply red roses dotted every table – it was an invite-only dinner and talk, drawing such faces as theatre impresario David Mirvish, Twitter guruess Kirstine Stewart, Liberal Party candidate Chrystia Freeland, Four Seasons founder Isadore Sharp, and director Deepa Mehta. Another director, Australia’s P. J. Hogan, made the rounds, mentioning to me near the bar that he continues to get healthy “residual cheques” for his 1994 film Muriel's Wedding. Noted. 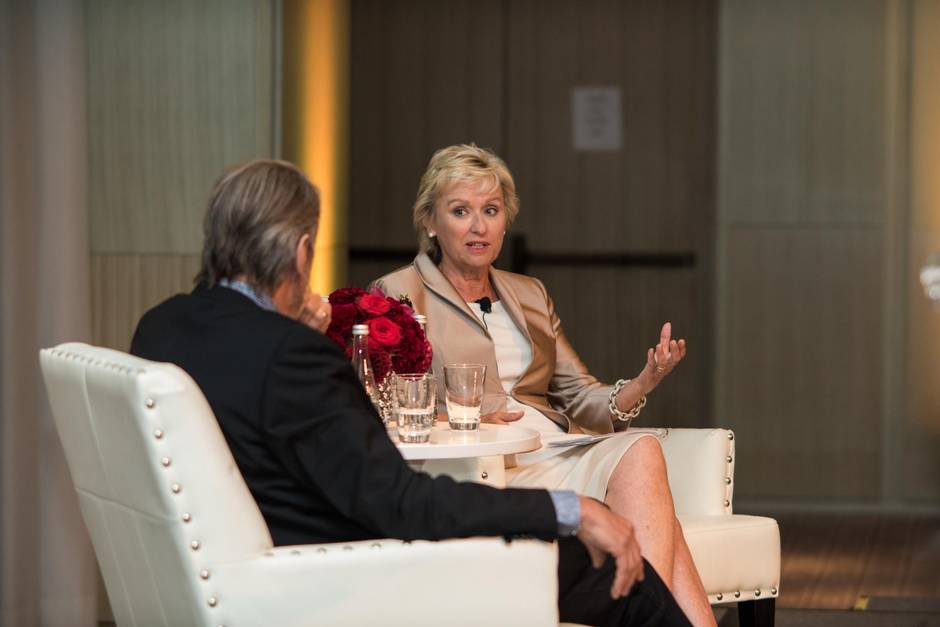 After rounds of sea bass and beef had come and gone, and the TIFF reconnaissance had been attempted tableside – “Did you see Charlotte Rampling in 45 Years?”, “What about that movie where Sarah Silverman goes serious?”, “Johnny Depp seems to have put on a few, no?” – the on-stage conversation, led by Brown, commenced. Calling the evening’s star attraction “diabolically talented,” she coaxed Irons into giving good quip on a wide medley of subjects – his iconic roles in Dead Ringers and Brideshead Revisited, his humble upbringing and the castle/fort he now happens to own in West Cork, Ireland. About the latter, the 66-year-old admitted that it has a helluva lot of stairs, it’s true, but that it’s good exercise. “Listen, have you seen what a membership costs to those gyms these days?”

About the notorious Claus Von Bülow, whom he played in Reversal of Fortune – a role that translated into an Academy Award for him – Irons was circumspect. “I believe he really enjoyed his time in the sun,” he said of the Danish aristocrat front and centre in one of the most famous society court cases of all time, twice convicted, then cleared, of trying to kill his wife. “I believe,” Irons added, “that he was invited to every dinner party during the trial.”

At another point, while musing on some of the “unspeakable crimes” that Irons has gotten away with on-screen – always charmingly – Brown, with her own plummy vowels, offered a theory. “If you have a proper British accent,” she said, “you can get away with anything.” 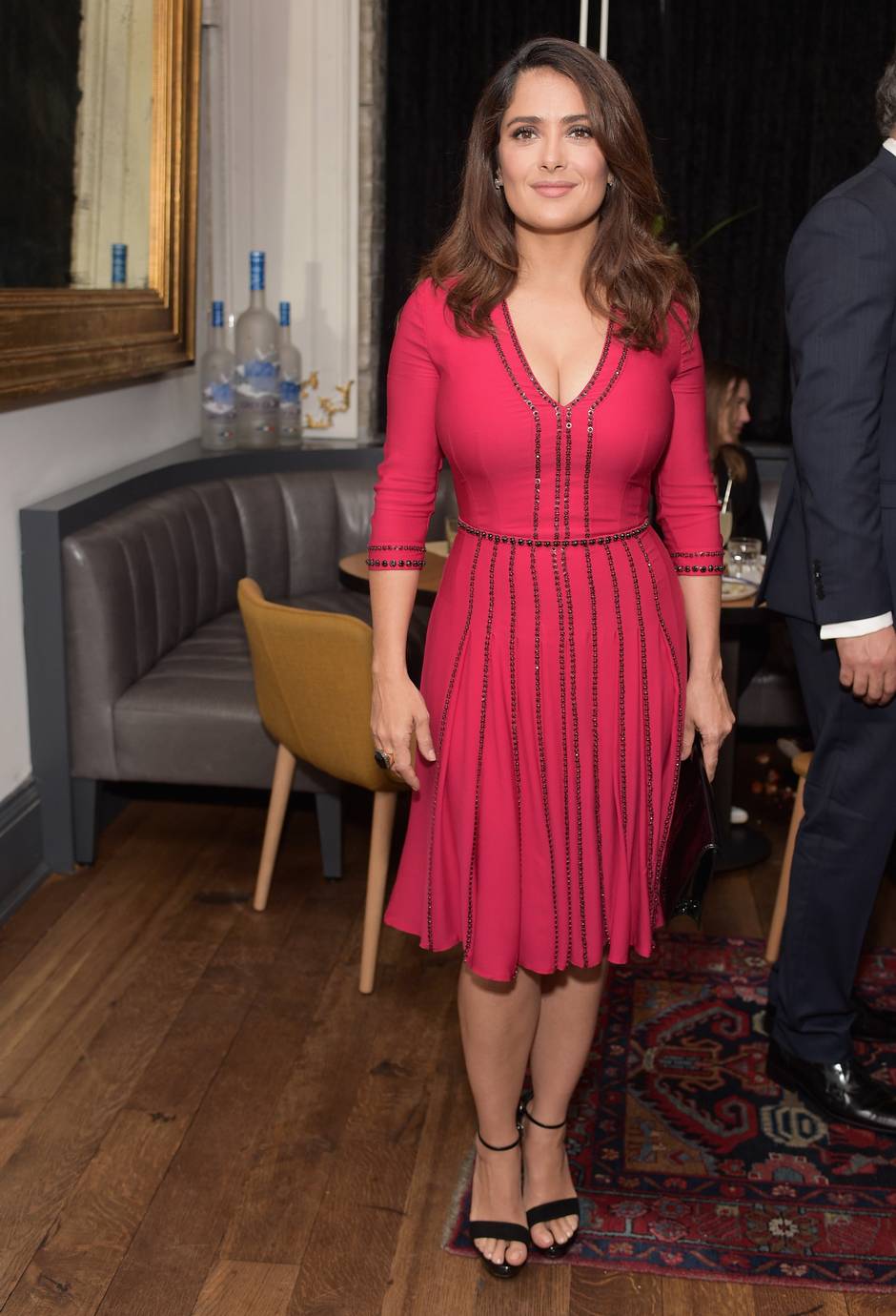 Meanwhile: Zooming around to yet more parties – a hat-tip now to BMW for getting me everywhere in style this week – I caught up with Salma Hayek at a small dinner hosted by Grey Goose at Byblos, before her big premiere, Septembers of Shiraz. Looking deadly good in a low-cut, ruby dress – this is a woman born to wear red – she gave me a good chuckle when talking to me about her seven-year-old, Valentina. “She has no accent!” Hayek told me, pointing out that mommy still has her Mexican accent, while her husband, French industrialist François-Henri Pinault, speaks with a thick gob himself in English. “Not sure how that happened,” she went on. 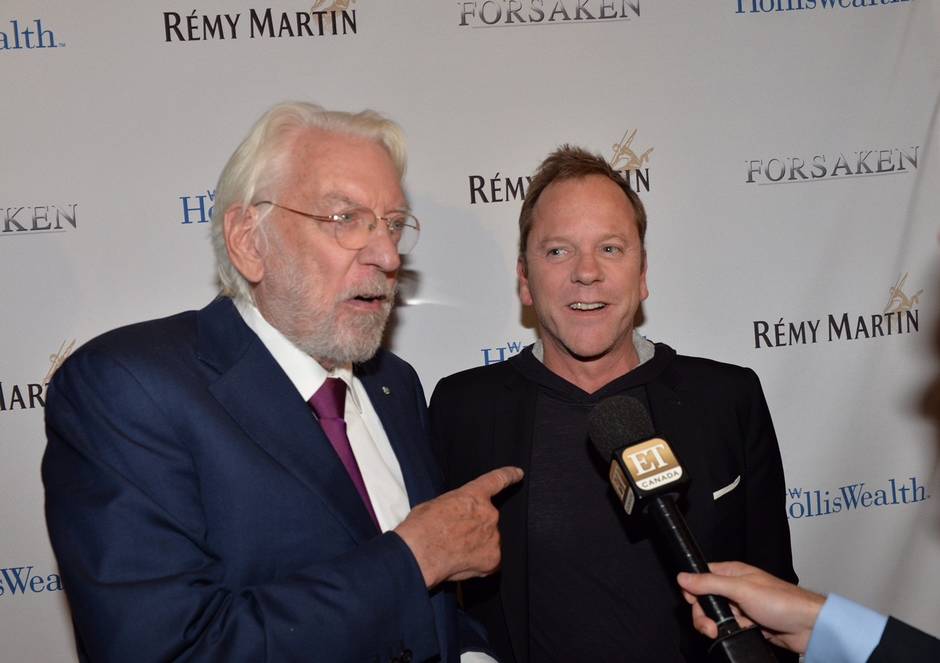 Not last, not least: It was a father-son affair when Donald and Kiefer Sutherland tucked themselves into a corner of the Ritz-Carlton Wednesday night, in a Rémy Martin-hosted celebration of their new western, Forsaken. Though the two Sutherlands have appeared in the same movie together before – A Time To Kill, I recall – they didn’t share any scenes in that one. So this … a first! And also a pretty small club, one that follows such rare father-son outings as Wall Street, in which Martin and Charlie Sheen teamed up.