The 40th edition of the Toronto International Film Festival doesn't start until Thursday, but The Globe and Mail's Arts team isn't taking it easy. For the past few weeks, we've been writing down, then scratching off, various films of interest – and with 289 features to choose from, our notepads have been experiencing more than a bit of wear and tear. Here, members of our TIFF team offer their top three most-anticipated festival films:

Son of Saul Can there be such a thing as a great Holocaust feature film? Should there be? Laszlo Nemes, a triumph at Cannes earlier this year, likely will provide the answers.

Francofonia Director Alexander Sokurov savaged us with Moloch in 1999 and ravished us three years later with Russian Ark. This one seems to be a love letter to French arts and culture – but we'll see, won't we?

The Club Chilean Pablo Larrain's Tony Monero was my favourite movie of TIFF 2008 while his No, a TIFF North American premiere in 2012, went on to score a deserved Oscar nod as best foreign film. Reasons enough for this feature about renegade Catholic clergy.

Anomalisa A stop-motion animated film from the twisted mind of Charlie Kaufman? Yes, please. Although the Being John Malkovich writer's dark sensibilities can be an acquired taste (hands up, Synecdoche, New York fans – anyone?), Kaufman always delivers something unexpected.

Office Director Johnnie To is well versed in the world of Hong Kong gangsters and corrupt cops – which is why his latest film is such a genuine curiosity. A musical set amidst the global financial crisis of 2008, Office promises to showcase an entirely different side of the prolific Chinese filmmaker.

Heat Okay, this is a bit of a cheat. But the chance to revisit this classic on the big screen with director Michael Mann himself participating in a post-screening Q&A is an offer I can't refuse. (Yeah, that was a bad Al Pacino joke, but I refuse to apologize.)

My Great Night Sacrilege, maniacal salesmen or supernatural spectacles, I'll always have whatever unusual and visually impressive creation Alex de la Iglesia is serving – in this case, My Great Night, an ensemble about a star-studded New Year's Eve network variety-show taping that devolves into what looks like Groundhog Day on a John Waters set.

Collective Invention Another satire of popular culture and celebrity infamy I'll be seeing is Kwon Oh-kwang's odd Collective Invention, about a fish-man mutant who becomes famous. If that's not terrifying enough, I want both the countdown clock in Roar Uthaug's geological disaster thriller The Wave and the single continuous 134-minute take in Victoria, a Berlin heist thriller .

Al Purdy Was Here Because he was a sensitive (and blustery and cigar-waving and uncompromising) man.  An iconic Canadian poet is celebrated and documented, using tweets from a statue, archival footage and new music commissioned for the much-required occasion.

Trumbo Are you now, or have you ever been a member of the Bryan Cranston fan club? The Breaking Bad actor stars in the biopic of Dalton Trumbo, a blacklisted screenwriter sent to jail in 1950 for refusing to answer the questions of Congress's bullying House Un-American Activities Committee. 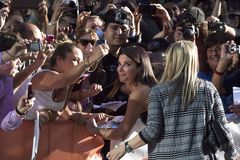 A must-see films list from a TIFF devotee and terrible tipster
May 15, 2018 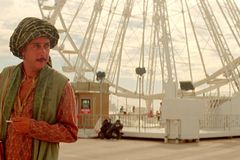 What is wrong with the Canadian film industry?
November 12, 2017 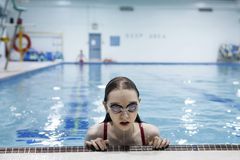