Once a year in Toronto, the Entertainment District earns its name. Red carpets litter the sidewalks outside spurious "hot spots" and publicity firms and hotels. Stargazers loiter around the hotels Fairmont and Thompson and Ritz-Carlton and anywhere else with a dynasty name.

Oscar-hopeful films premiere at the college campus theatre and, some nights, there are twice as many fans on the red carpet as there are filmgoers inside.

A homeless man on a bicycle stops to talk to a security guard outside a screening. "Has the festival started?" he asks. The security guard nods. "Must be September," says the man.

The Toronto International Film Festival is A-list, a monster. Like a movie star, TIFF is celebrated, cherished, or reviled, but not ignored. It's a good place to investigate fame's effects in a more and more fame-motivated world. Here is a huge city with next to no truly famous people, and then, in one Thursday night, they all seem to fall from the sky.

Ryan, Brad, Halle, Selena, Kristen: They are smaller in person, but massive in personal space. As screens get bigger, so does the protective aura of celebrity. Stars in their entourages take up whole city blocks, penthouse suites, secret rooms in restaurants, the sprawled backseats of SUVs. During TIFF, they embiggen the city, while making its citizens feel smaller, tiny even, like extras in the fuzzy background of a long shot. The effect of fame is physical. Or it's just physics.

Acting is reacting, said Stanislavski, and whenever fame enters a room, that room becomes a stage. Unless we don't see the famous person (but how can you not see, when everybody else is looking?) we must react. We thus act. Whether we're surprised or ecstatic or shy or indifferent, in the presence of fame, we are all acting. To wander through the gorgeous, unfinished Soho House, its multifloors glimmering with candlelight and champagne, is to take part in interactive theatre.

In the past several years, fame-as-motivator has become a serious area of study for academics. There is a growing body of research, of diverging credibility, on how many of us want to be famous. Is it half? (A 2006 Pew Research Center survey found 51 per cent of 18- to 25-year-olds considered fame to be either the first or second most important goal for their generation.) Forty per cent? A third? Let's assume that – due to fame-enablers like Facebook and Instagram, making all of us stars on the pocket screen – the percentage is growing. Let's say it's 30. It is this 30 per cent that makes the Toronto International Film Festival happen after dark: the gala presentations, the charity balls, the private rooftop parties.

Only, like, 3 per cent will get into any of these things.

At the door on Thursday night, and Friday night, and Saturday night, I heard bouncers say, "We're at capacity." Then I walked into a 70 per cent empty room.

You cannot be around fame unless somehow, somewhere in the twisted gut, you desire it. Only the desirous can stomach all those free cocktails. I'm not moralizing. There are no wrong desires. But celebrity, toxic and intoxicating, is, too, a disease. It lures the desirous into lush, hushed rooms, thick with glitter and security, where Scarlett Johansson was totally talking to Bradley Cooper and the guy from Glee a second ago. "The talent," as publicists say, always take the back stairs out by 1 a.m. "The VIP-only lounges" then serve till 4 and serve as booby traps, containing the fame-seeking contagion, keeping the rest of the city safe.

Because having fame and wanting fame are so often mutually inclusive, we forget they are not the same thing. The wanting of fame is what deforms us. For 10 late, free-drunk nights of TIFF, Hollywood makes Toronto famous and the Toronto-famous back into beautiful nobodies. Outside the Soho House, this is hilarious frustration (witness the parade of D-list models and d-bag promoters all pantomiming texts to that friend's friend who knows a guy). Inside a faintly rational mind, it's a relief.

But even those with ego-shy sensibilities want to see, if not touch or have, fame. It's like knowing there's life on Mars. Or after death. It is, at the end of another night smoking joints with Woody Harrelson and joking with okay, near Greta Gerwig, the virus of hope.

The sociologist Orville Brim wrote, in The Fame Motive, that it's a pull as strong as medieval belief. Not all of us want to live forever. But it would be nice, in a human-supremacist way, to believe that some of us will.

Texts mingle with tweets and overheards in my hivey, festival mind. Selena Gomez changed dresses three times. Selena is tiny. Justin Bieber is coming. Randi just had the best conversation with Kristen Wiig, who is tiny. At a club nobody has heard of, tiny Kirsten Dunst arrived in a hybrid car. Matt Damon just ran into my friend. Jude Law might actually be hitting on me. Jennifer Lawrence is so tiny. Justin Bieber is actually coming. Is that Emma Roberts or Emma Stone? Either way, she's tiny.

I always thought if there were a god he would be smaller than life, like the wizard in Oz.

And if there were a god we wouldn't need movie stars.

Days ago between screenings and parties I wrote about Kristen Stewart and being in love with her. Sick as it is, I really did feel that way. I felt it because, unlike the always smiling, untrustable starlets of other teen films, she seems sick of not just with her terminal celebrity. She seems human.

When she walked the red carpet for On The Road, no less than 600 of her Twiward fans waited for hours on a two-second, one-sided exchange: a smile, a wave, a scribble on a photo. Elsewhere, the fashionable people who ridicule these fans were yet doing the exact same thing, only behind a velvet rope, not a handrail. But a blurry Instagram of Jackie Chan being completely normal in a corner isn't any uniquer than a signature, and if you think it is because you're taking it, not getting it, you too have caught the disease.

There is nothing pathetic in particular about Kristen's fans, or Rob's, or whoever's. There's only pathos, in that when Kristen smiles and waves and smiles, she's doing it because her publicist needs the fans to shut up, and they think she's doing it because she loves them. Lacking proof but not conviction, they are the new mass of true believers.

Still, fans are more honest than the near-famous about wanting fame not for themselves, but for keeps. Think of the signs they hold: Kristen forever. Ryan forever. Selena forever. It is not Kristen or Ryan or Selena they believe in.

new
Kristen Stewart reveals more than she means to
September 7, 2012 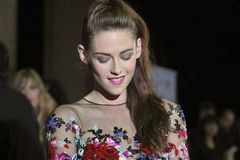 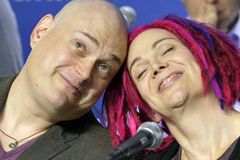 Ewan McGregor, Naomi Watts and a moment of gravitas on the red carpet
September 9, 2012 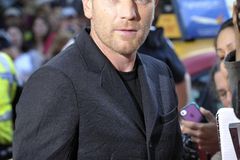