It took more than 25 years for someone to make a movie of Martin Amis's London Fields. Now the adaptation of the much-admired novel has at last arrived – and the hundred or so critics in attendance at a one-off press and industry screening this week may be the only people to see it for a very long while.

On Thursday, the film was withdrawn from the Toronto International Film Festival just one day before it was set to enjoy its world premiere after news emerged that the film's director, Matthew Cullen, has moved to sue the producers for fraud. It's a turnabout almost worthy of the novel's unpredictable comic suspense.

TIFF's organizers issued a statement that the film would be pulled in support of the director's complaint. "We have worked to make our festival a public showcase for creative expression through the moving image," the statement reads. "However with uncertainty surrounding the creative vision of the version of the film scheduled to be screened on Sept. 18, we feel it is only appropriate that we remove this film from the Festival lineup." Lions Gate Entertainment bought the rights to London Fields earlier this week. It is as unclear how these circumstances will affect plans for a theatrical release.

Deadline.com reports that Cullen seeks damages in excess of $1-million as a consequence of the producers having allegedly "tampered with plaintiff's work as director of the film." The 17-page filing cited in the report objects to "revisionary elements" in an edit not overseen or approved by the director, including "incendiary imagery evoking 9/11 jumpers edited against pornography, as well as juxtaposing the holiest city in Islam against mind control." Cullen is referring here to several montages in which a variety of stock footage has been edited together frenetically. The footage is intended to be textural, contributing to an atmosphere of violence and impending doom taken faithfully from the novel. But the montages are badly assembled and integrated.

Cullen's complaint also alleges that he was not paid the $300,000 fee promised to him at the outset. He is said to have explored the possibility of distancing himself from the project or removing his name from the credits altogether, but Directors Guild of America rules disallow it. Meanwhile, the stars of London Fields – including Billy Bob Thornton, Amber Heard and Johnny Depp – did no press for the film and hadn't been expected to show up for the Friday premiere even before it was cancelled.

In a statement, London Fields's producers said they were "greatly disappointed that TIFF decided to pull the film from the festival. We have always loved launching our films here, but feel in that particular case there has been an ill-considered decision made against our rights. It's the  first time we have ever heard of a festival removing a movie from the festival due to its imagery being deemed too provocative." Producers added that they will "vigorously" oppose Cullen's lawsuit.

Despite Cullen's grievances, Amis says that he was "pleased and relieved" by the "surprisingly faithful" adaptation. "I thought it had a lot of atmosphere, terrific performances," Amis said by phone. "It keeps the darts, and it keeps the doomy atmosphere of mutual assured destruction – which is in fact passed out of the general consciousness in those 30 years since it was written. I'm surprised that they stuck with that and I was pleased."

London Fields has been in the works since "around the turn of the century," Amis recalls. Although he says that writer Roberta Hanley "did most of the work" on the London Fields screenplay, it seems much was changed from script to screen. "It's nothing like what I believed it was going to be like," Hanley told me at TIFF this week. Still, she too was pleased. "Matthew Cullen is unbelievably good at this. In the end, I think this is the birth of a new director." 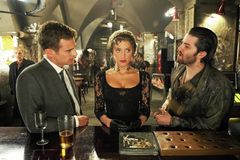