In our psychological calendar, the one we learned at school, the New Year begins now. But September's renewal is also a return. We move forward by going back - back to class, back to work. It's a time for regathering and, in this northern part of the world, the ritual of regathering has coalesced around a pair of signal cultural events - the film festival returns to Toronto, and hockey players return to the ice. On red carpets and red lines, the gods are back to stir us anew.

Normally, of course, these rites are two solitudes that never intersect. Until this year. Next Thursday evening, the Toronto International Film Festival will kick off its annual showcase with a gala screening of, get ready for it, Score: A Hockey Musical. And this much is certain. From its very first frames, when John McDermott belts out our national anthem at the centre-ice dot of some weathered rink, Score is Canadian with a vengeance, certainly the most unashamedly, irrepressibly, gleefully parochial film ever to open the Toronto festival.

It may also be the worst film ever to open the Toronto festival. But that's a matter for debate, which will surely please Piers Handling who, as the head of TIFF, writes in its program: "Over the past 35 years we have embraced our duty and responsibility to give audiences a chance to experience film as a window into the real issues and challenges facing society. And if we can encourage debate, discussion and dialogue along the way, I think we've fulfilled our mandate."

Well, mandate fulfilled. There's bound to be hot discussion over the merits/demerits of Michael McGowan's musical, where characters, on skates and off, sing and dance and fight and fall in love and, most of all, ankle their way through the slushy doggerel of such rhyming couplets as "Are we expected to believe that baloney/ You couldn't even drive a Zamboni."

So, on the surface, the "real issue" here is simple. With its setting in Hogtown but its heart in frozen ponds from sea to shining sea, Score is meant to exude populist charm. Its clear role is to give those opening-night patrons (not just in Toronto but in no fewer than four other September festivals across the country) a light, breezy appetizer before the more exotic and substantive entrees. However, like most such populist exercises, the question under debate can soon be reduced to: "Yikes, is this risibly lame or delightfully lame?" Argue away.

Yet, below the surface, lurking like a loonie interred in the ice, a more intriguing issue can be found - the interface between culture and art. Let's start with the proposition that, in any country, its art is always culture but its culture isn't necessarily art. Here, for example, Tim Hortons doughnuts are a sweet cultural staple, but (with apologies to Justin Bieber) sugary confections ain't art. As for Tim Horton himself, and all the Gretzkys and Lemieuxs and Crosbys who succeeded him, that's a trickier matter.

In Score, the teenage protagonist is a scholar/athlete torn between his cerebral interests and his talent for the game. At one point, his sympathetic girlfriend sings him this counsel: "You should follow your heart/ But everybody knows that hockey's not art." Well, do we know that, or is the line blurred here between culture and art? Like any sport beloved by the nation it's played in, hockey is a cultural fixture. Like any sport performed at an elite level, hockey has its moments of pure artistry. Certainly, it's a form of entertainment, a show complete with drama and climax and resolution. Certainly too, it's really big business.

Now add up these elements: Hugely popular, with a recognizable aesthetic component, a fat commercial payoff, and appeal beyond our boundaries. Hockey may not be art, but it's definitely what Canadian art wants to be. It's what our novels want to be, what our TV shows and movies want to be. It's what TIFF wanted to be and has become.

Better yet, hockey, this central fixture in our culture, contains at its emotional core an ongoing controversy that resonates through the rest of our culture, not just through the creative arts but into our funding institutions, our media, especially into our public broadcaster. Yes, the controversy is over fighting and the wider dilemma that fighting symbolizes - that is, whether to pander to the masses at the expense of "artistic" purity.

Back to Score, where the movie's plot line repudiates fighting and all that crowd-pleasing mayhem, even as the movie itself panders to the masses at the expense of its artistic purity. The hypocrisy is delicious, as is its rationale, offered when the teenage hero says of his snooty parents, the sort of folks who would mourn the passing of the old Radio Two: "You reject anything that has a whiff of mainstream without even giving it a chance."

Hey, with that remark, the kid sounds exactly like a CBC prez or a Telefilm honcho, making an argument that's heard a lot these days: the somewhat ironic insistence that navigating the mainstream is now the brave and risky choice, while sailing off on those artsy tributaries is just so safe and stale and outdated.

The problem with this logic, in a small country like ours, is that Canada's cultural mainstream is the world's tiny tributary. Unless they rise to the level of art, which knows no borders, our populist exercises don't travel well. That's why Score is parochial in the worst sense - maybe a Winnepegger will love it, but a Parisian or a Roman, who wouldn't know a Zamboni from a zabaglione and is given no reason to care, assuredly will not. Similarly, the celebrity cameos that dot the film, the likes of Walter Gretzky and Theo Fleury and Evan Solomon and George Stroumboulopoulos, aren't exactly world travellers either. Stick the two Georges - ours and Clooney - on the TIFF red carpet, and guess who the paparazzi, including the Canuck paparazzi, will be mobbing?

Obviously, I'm not suggesting Canadians shouldn't make movies that reflect our unique culture. Quite the contrary - we must. But I am contending that a sugary confection that only panders to the Canadian mainstream, that is all doughnut and no Tim Horton; that skimps on the art but goes big on the crowd-pleasing antics, is bound to fail broadly even if it succeeds narrowly. It's like trying to peddle hockey in a non-traditional market. The specific value of the game lies in the universal appeal of its artistry - without that art, there can be no sale.

For all these reasons, Score is a much better metaphor than a movie. Unwittingly, then, it does exactly what Handling wants, providing us with a "window into a real issue" facing our society. As for TIFF itself, give the fest credit: Unlike many of our cultural institutions, it has done a superb job on the pandering front - nicely balancing the art and the commerce, the films with the festival.

Yet it has the cinematic output of the entire globe to draw upon, and bringing the world to Canada is relatively easy. Bringing Canada to the world is much harder. Score is hardly likely to promote that union, not because the picture is light and breezy but because it isn't nearly light and breezy enough - what should be poetry is doggerel, what should be The Umbrellas of Cherbourg in shin pads is a singing Slapshot minus the laughs.

This new year, the two rites of September finally get introduced, our national obsession meets our international celebration, but their opening-ceremony handshake feels like a head-on collision. In 339 films from 59 counties, TIFF the vast festival is so pluralistic it entrances; in this one film from the host country, Score: A Hockey Musical is so Canadian it hurts.

Offside: Why can't English Canada make a hockey film that scores at the box office?
May 2, 2018 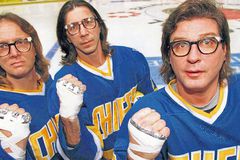 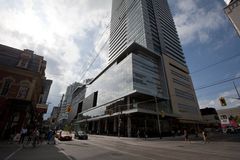 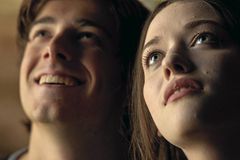