For his new documentary on the rise and fall of disgraced theatre impresario Garth Drabinsky, director Barry Avrich went to visit his famous subject in prison – but he left his camera behind.

"I went to see him at Beaver Creek a few times," Avrich says, referring to the minimum-security institution near Gravenhurst, Ont., where Drabinsky is serving a five-year term for fraud and forgery.

"I never asked him [to participate]. I went to see him because I needed closure on whether I actually needed him [in the film]."

Those prison encounters must have been interesting. It was Drabinsky, after all, who had retained Avrich's Toronto ad agency to create commercials for films (during Drabinsky's years at the helm of Cineplex) and stage shows (for Livent, the public theatrical production company that he ran from 1989 to 1998).

Now, the former employee was effectively in control.

"I had a front-row seat on the man," says Avrich, 49, the relentlessly energetic maker of more than a dozen documentaries, including films about Hollywood legends Lew Wasserman and Harvey Weinstein.

"I literally shot and edited hundreds and hundreds of radio and TV commercials. I knew Garth loved a spot if his only comment after screening it was, "I need a slower dissolve between scenes A and B.' "

In the end, Avrich concluded that he already had enough archival footage for his film, Show Stopper: The Theatrical Life of Garth Drabinsky, which screens Thursday at the Toronto International Film Festival, and that any more might have been overkill. "I found some great stuff," he adds, "introspective, even cathartic interviews."

At one point, Avrich says he thought he might be able to create a Drabinskyesque version of Client 9, the 2010 documentary about former New York governor Eliot Spitzer's fall from grace in a prostitution scandal.

"But Spitzer went on-camera and expressed humility and remorse," says Avrich. "Garth was never going to do that."

One of the clips he found was shot just after Drabinsky had outfoxed rival Famous Players and bought control of the Imperial Six cinema on Yonge Street (originally the 1920 Pantages vaudeville house, which Drabinsky would restore to its original glory as a venue for live theatre). Someone says to Garth, 'You really caused a lot of trouble.' And his response is to shrug and say, 'That's life.' "

Narrated by actor Albert Schultz, the film, Avrich says, rolls out as a kind of debate, but not about Drabinsky's guilt or innocence. "The debate is about what drove him."

Avrich is convinced, as Drabinsky's trial judge was, that he was not motivated by financial greed.

"If it was greed," he says, "it was greed for legitimacy and power, perhaps driven by his childhood bout with polio. I do think he cared about the art. I remember seeing a dress rehearsal for Show Boat, and the rug he used for the entrance to the speakeasy in Chicago was actually a Persian carpet, with real brass fittings on the stairs. Look, if it had been about money, Garth would have picked more commercial projects."

Instead, he notes, nothing Drabinsky mounted after Phantom of the Opera and Joseph and the Amazing Technicolour Dreamcoat, was likely to make significant money. In fact, virtually everything lost money.

"Garth's modus operandi was consistent," Avrich says. "At Cineplex, he bet all the chips on whether he could steal the company from Lew Wasserman's MCA – and he lost. He did the same at Livent. Ragtime had to work, and when it didn't win the Tony [for best musical, losing that year to Disney's The Lion King, although it won four other Tonys], things started to unravel. But that's not a lust for money – it's for legitimacy, lifestyle and passion for the art."

Some of Avrich's earlier films, notably the profiles of Wasserman and Weinstein, have been criticized for not being tough enough on their subjects.

The director doesn't necessarily agree with the critique. "It bothers me to no end," he says, "because I'm not making the film for the industry. I'm not trying to make a Michael Moore film. I'm making it for people who may have seen some of Livent's shows and simply want a better sense of the man. It's not an exposé about oil companies behaving badly. Let the audience decide." He argues that Show Stopper contains a reasonable balance of voices, among them Chita Rivera, Diahann Carroll and Elaine Stritch (on the pro side) and Wasserman's MCA protege Sid Sheinberg, New York reporter Michael Reidel and former Universal TV boss Frank Price (con).

Sheinberg actually says in the film, "I knew from the moment I met Garth that he wanted my job and that I wasn't dealing with Rabbi Drabinsky."

And even Garth's friends, Avrich says, are forced to squirm a little, acknowledging Drabinsky's various missteps. "Elaine Stritch even asks, 'Are there any honest producers in the theatre?' "

Still co-directing his ad agency (he counts the Stratford Shakespeare Festival, American Express and the Canadian Opera Company among his clients), Avrich has two more docs in the works – one about Canadian comic David Steinberg, and another about a major American magazine publisher who, for the moment, he declines to name.

"I sleep four hours a night," he says, explaining his voracious appetite for work. "I know it's not healthy, but I find sleep a complete waste of time."

The world according to Garth? Not quite
January 6, 2012 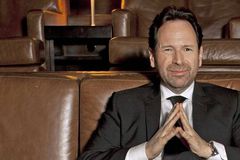 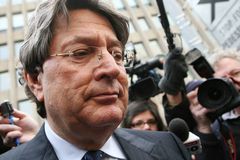 Drabinsky takes a curtain call before jail
September 16, 2011
Follow us on Twitter @globearts Opens in a new window
Report an error Editorial code of conduct
Due to technical reasons, we have temporarily removed commenting from our articles. We hope to have this fixed soon. Thank you for your patience. If you are looking to give feedback on our new site, please send it along to feedback@globeandmail.com. If you want to write a letter to the editor, please forward to letters@globeandmail.com.
Comments