It may not have been the biggest upset in Oscar history but it certainly was the biggest screw-up.

As the creators of La La Land, the movie much favoured to win best picture at Sunday's Academy Awards, began their acceptance speeches, a commotion erupted behind them. Then La La Land producer Jordan Horowitz stepped forward to tell the audience that Moonlight had actually won and to hand back his Oscar.

It was all a stupid mix-up: Somebody had given Warren Beatty the envelope for Emma Stone's best actress win in La La Land and he had showed it to co-presenter Faye Dunaway with some puzzlement before she simply read out that title.

Related: The highs and the lows (and one big blunder) at this year's Academy Awards

Explainer: Everything you need to know about how the big Best Picture blunder happened

But the mistake also produced the loudest and most awkward symbol of the transfer of power from old Hollywood to an industry that must reflect a more diverse America as the white guys were literally forced to hand over their prizes. After two years of the #OscarsSoWhite controversy, the 89th Academy Awards embraced African-American talent.

Moonlight director Barry Jenkins had made the point directly earlier in the evening when he and Tarell Alvin McCraney, the dramatist on whose play the film is based, accepted the Oscar for best adapted screenplay.

Jenkins promised that both the Academy of Motion Picture Arts and Sciences and the American Civil Liberties Union would support people "who feel like there's no mirror for you" for the next four years, in a reference to Donald Trump's term as president.

McCraney echoed his words, saying: "This goes out to all those black and brown boys and girls and non-gender-conforming who don't see themselves, we're trying to show you you, and us."

Those were among the most overt political statements during an evening that would have disappointed anyone who tuned in hoping that liberal Hollywood would be on fire with righteous indignation against the new president.

Aside from a few predictable jabs from host Jimmy Kimmel, joking over his concern that Trump was not tweeting about the show, the references to the state of American politics were veiled beneath many passing salutes to diversity, empathy and humanity.

Winning for best supporting actress in Fences, a tearful Viola Davis said that as an artist she belongs to "the only profession that celebrates what it means to live a life," and praised playwright August Wilson (from whose play Fences was adapted) as a writer "who exhumed and exalted the ordinary people."

Similarly, presenting that award, British actor Mark Rylance made a few telling comments about the ways in which supporting actors actually often play in opposition to main characters and that opposing without hating seems to be something women are particularly good at.

Among these more delicate notes, the largest political gesture of the evening sounded rather flat, perhaps because people could guess it would be coming: The Iranian feature The Salesman won best foreign-language film and director Asghar Farhadi was not there to accept the award.

He had said he would stay away to protest Trump's travel and immigration ban against citizens of Iran and six other Muslim-majority countries. Instead, Iranian-American businesswoman Anousheh Ansari read out a statement from Farhadi in which he denounced the ban, and the anti-democratic nature of us-versus-them fear mongering before arguing that film transmits shared human values.

Meanwhile, Kimmel's risk-free shtick got more and more clubby as he included much inside joking about his dislike of Matt Damon (Who knew? Who cared?) and a gag in which a busload of supposedly awestruck tourists was unloaded into the celebrity-studded auditorium.

By the time Casey Affleck was picking up his Oscar for best actor, have neatly side-stepped controversy over a sexual harassment suit he settled in 2010, things were getting painful. As the shambling Affleck confessed, "Man, I wish I had something bigger and more meaningful to say," many viewers might have agreed heartily.

The awards to Davis and Mahershala Ali of Moonlight meant that African American actors won both best supporting categories while whites (Affleck and Stone) won the best acting categories.

La La Land also won cinematography and took the directing prize for Damien Chazelle. Perhaps that should have been somebody's clue that the La La Landers were in for a nasty surprise: In recent years, the Academy has often, rather illogically, split the best director and best picture prizes between two front runners.

Still, in this year when the Oscars hoped to get a ratings bump from those who tuned in expecting controversy, there was nothing much to keep a tired viewer watching after 11 p.m. ET. Yet if you made the mistake of turning off the TV and going to bed you would have missed the oddest Oscar moment ever as Horowitz announced: "There's a mistake. Moonlight. You guys won best picture."

"This is not a joke," he assured the audience as Jenkins and Moonlight's producers began their move towards the stage.

No, it's no joke. This time, Hollywood really does seem to have changed. 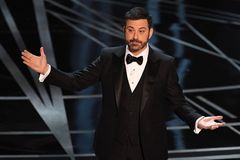 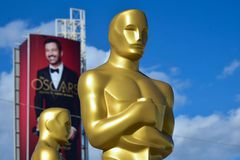