In Canada, the announcement of a poetry award short list is always a cause for celebration. And, invariably, it is also a cause for complaint. We poets, you see, are notoriously hard to please. Some of us will be excited about the nominees, either because we love their work or because they are our friends, while others will be disappointed that another great poet has been ignored or that one of our enemies has managed to sneak onto the short list again. Our jubilation is only matched by our chagrin; we are supposed to be passionate, after all, and our tempers flare so high because, as we frequently tell ourselves, the stakes are so low.

If a short list names too many celebrated poets, the tall-poppy brigade will be dispatched to declare their work pedestrian and the short list boring, bureaucratic and safe. If too many obscure poets are named, someone will decry the strangeness of the list and suggest that some ulterior motive must be behind it. No matter who wins, it's usually a lose-lose situation.

This year's short list for the Governor-General's Award for poetry is noteworthy for many reasons, mainly because three of the five titles were published by BookThug, a small Toronto-based publisher that specializes in the avant-garde. When the announcement was made, amid the congratulations offered to BookThug, some of us held our breath waiting for the inevitable controversy to erupt. But it didn't. Not really.

Oh sure, maybe one of the usual cranks made allegations of inequality in the judging process, but the allegations had no teeth, and the Canada Council stood firmly by its jury. Some even complained that high-profile books had been overlooked, but having a high profile does not entitle a book to be on a short list. I'll even admit that I was somewhat skeptical at first, but after careful consideration, I think this could be one of the most balanced poetry short lists the Governor-General's Award has seen in years. The list contains two previous nominees (one of whom is quite famous), a more obscure veteran poet with a history of being overlooked by the mainstream, and two mid-career poets with fast-growing reputations. There's even a healthy mix of males and females, and of East and West. It's almost as though the unofficial Canadian inclusivity handbook was followed to the letter, except for one thing: this short list is neither boring, bureaucratic or safe.

Susan Musgrave will be the most familiar name on the list to many readers. Origami Dove is her 14th book of poetry and the second to be nominated for the Governor-General's Award (the first was A Man to Marry, A Man to Bury, in 1979). While the title might suggest something precious and quaint, this book still contains the kind of dark, evocative lyrics Musgrave is famous for. But it also reveals Musgrave at her funniest. From the elegiac sequence Obituaries of Light to the biting narratives of Random Acts of Poetry, Origami Dove proves that Musgrave hasn't lost her edge; in fact, she's been sharpening it.

Michael Boughn's Cosmographia is another book with a sense of humour. Billing itself as "a post-Lucretian mock epic," this long poem is divided into 12 "books" and 71 cantos. It's a work written with much formal rigour, but one that also conforms to the Dadaist impulse not to take its subject matter too seriously. It bears a superficial resemblance to Frederick Seidel's The Cosmos Poems, albeit more light-hearted and more self-consciously postmodern in its undermining of epic traditions. But this celestial romp, with its poems called Joys of Gravy, Freedom Fries and Hoochy Koochy Equivocations, never completely escapes (if you'll forgive the pun) the force of gravitas, and it manages to be both "mock" and "epic" at the same time.

Where Boughn's book takes the form of a mock epic, Kate Eichhorn's second book, Fieldnotes, a forensic, as the title suggests, takes as its form the notebook of a forensic anthropologist. This mock notebook presents its first-person narrator as the character who authored these fieldnotes, but it also, slyly, employs the structure of a teleplay, as though this heroine were merely a character in a present-day television series about a forensic anthropologist, adding a layer of metafiction upon metafiction. Since forensic anthropology is concerned with the search for physical truths, this two-headed fantasy creates a challenging framework in which Eichhorn succeeds in setting some very daring and very intimate poems.

Garry Thomas Morse calls upon his Kwakwaka'wakw heritage to inform his fourth collection of poetry, Discovery Passages. This is a rich and varied book, combining poetic lyric with elements of visual, sound, concrete and documentary poetry. Contrasted with Eichhorn's forensic metafictions, Morse enacts a very real forensic case in this book, deftly gathering and presenting the evidence of crimes against the Kwakwaka'wakw people and their language and culture. The book ends with the poem 500 Lines, which includes the sentence "I will not speak Kwak'wala" repeated 500 times over 12 pages. It's chilling to see on the page, and a grim encapsulation of this book's haunting power.

This last book on this short list was my favourite, but it's also the hardest to describe. Phil Hall's Killdeer is a literary memoir in the form of a lyrical essay, a practice sometimes guilty of producing indulgent, abstruse texts more interested in being difficult than in being read. But not Killdeer. Hall manages to rescue the lyrical essay from its recondite excesses and turn it into something that's as adventurous as it is readable. Hall has called himself a "sururalist," and this book charts his development as a writer, but it also demonstrates and furthers that development. Perhaps it's an unlikely choice to win this year's Governor-General's Award, but I'm predicting it anyway. Hall is no stranger to the GG poetry category. He was nominated in 2000 for his book Trouble Sleeping. And he was nominated for the Griffin Prize for his 2005 collection An Oak Hunch. He's one of the most inventive, and least pretentious, poets we have. If he's not a household name yet, he deserves to be.

Paul Vermeersch's most recent poetry collection, The Reinvention of the Human Hand, was a finalist for the Trillium Book Award. 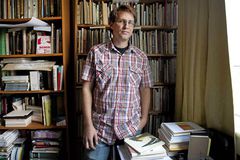