My colleague, the novelist Camilla Gibb, recently published in these pages a lament for the declining income of literary writers. She pointed out many truths: that something has happened, in the past 20 years, to the publishing industry; due to various forces (the rise of free entertainments, the power of Amazon), highly regarded novelists can no longer make a living from their work. Globe columnist Elizabeth Renzetti also addressed the crisis in artists' incomes a week before. Both mentioned a widely quoted story about the Booker Prize-winning novelist Richard Flanagan, who said that just before he won the prize he was ready to look for work in a coal mine, because even his hugely successful novels were not bringing home the bacon.

This week, news of layoffs and closings from two major Canadian publishers pushed the literary community further into pessimism.

Everything my colleagues say is true. We've all been wailing about this for a while. What on Earth can be done about it is another question – one that neither whining artists nor even high-minded, high-spending government agencies may be able to solve. Gibb is talking mostly about what we call the mid-list, the critically respected writers who are not bestsellers. She explains that advances for their books are growing smaller and they have little chance of making bestseller lists that are dominated by genre fiction. As a result, such authors' incomes are at poverty level and are actually declining, in real dollars. She concludes somewhat alarmingly that these authors may actually stop producing their work, which makes up the bulk of what we call literature. This seems unlikely, given the swelling of creative-writing programs in universities around the world. There must be more novels being written now than at any time in human history. They will be published by small presses and make no money, and their authors will survive on teaching and writing other people's Web copy. The flow of literary novels will go unstanched. Still, we all do miss the grand days of the mid to late 20th century when the novel was a prized cultural product and writers were well-enough remunerated to spend their days in their book-lined studies reading Herodotus and thinking. So, aside from throwing our hands in the air and wishing for the good old days, what can actually be done?

Gibb suggests that the institutions that give out lavish literary prizes spread their riches more widely. This would be nice, but that money wouldn't really go far.

She also suggested, in a radio interview, that the government do more for the production of literature by subsidizing writers directly with more grants. All of us writers would love this, but the general public is not in a mood to hear it at the moment. Canadians now, maybe more than ever, believe in the free market as the most important indicator of value.

It is hard to convince a non-literary audience that literature is in failing health when the media report constantly on its spectacular successes: Harry Potter, Twilight and Fifty Shades of Grey are what define the publishing industry to most. When a spate of teenage girls gets three-book, six-figure deals for fan-fictions first published on Wattpad, it's hard to feel sorry for writers. The industry appears to be thriving. If you don't want to write the kind of thing that lots of people want to read, then how can you complain anyway? Call your art a hobby and enjoy it for what it is.

It could also be pointed out that the declining incomes of artists are just part of a larger global economic shift from which huge employment sectors are suffering: Lots of people no longer have job security; lots more people work from contract to contract; more people than ever in this country work in non-unionized service jobs. People with PhDs have no job security, and we're sad for fabulists? We all might feel an urge to call on the government for bailouts. But no amount of government granting is going to restore a 1950s economy.

The good news is that the literary economy is already rearranging itself to make new ways of funding non-commercial art and artists. The academization of writing that troubles so many – the employment of dozens of mid-list writers as teachers of writing in universities, and the funding of their graduate students through bursaries and teaching-assistant positions – is in fact a response to the failing promise of the free market. (Yes, they are adjuncts with no security and no benefits, but that's what gives them the freedom to goof off and write sometimes: They have not signed their whole lives over to an institution. It's exactly the kind of compromise that artists have always made.) The government is in fact already indirectly funding more literary production than you know, because it is funding universities. Poetry has been operating on this model for years , and it is flourishing: Critics say this country's poetry is at its most sophisticated ever. You think the poets are complaining that their slim volumes are not on sale at Costco?

Sure, the new system comes with its unique flaws. We have to teach for several hours a week instead of writing our own things. As far as compromises go, it's a lot better than working in coal mines. We have to publish our artiest work with tiny presses instead of with multinationals because the big presses are too busy firing directors and selling off divisions to even read our manuscripts. No big deal – our sales are microscopic with either option. A book's colophon means nothing to a reader anyway.

Now the next thing must happen: the abandoning of print. When the first serious, respectable, purely electronic literary-fiction publishing company comes along and starts slapping around the Canada Council, the prizes, the newspapers and their antediluvian biases, they will have to be taken seriously, and they will make a profit on every $9.99 e-book they sell, and so will the authors. Investors, raise your hands.

Curtain drawn on The Graduate in backstage struggle at Canadian Equity
October 10, 2014 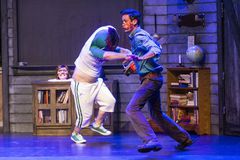