You're not administering a test. It just seems that way, given everything you know about the person in front of you. Kalle Lasn, the founder of Adbusters magazine and the godfather of the Occupy movement, is standing in The Globe and Mail cafeteria in downtown Toronto, considering the options for his morning coffee: Starbucks, or a generic java?

You know how this ends. He's a tireless gadfly who's been struggling for decades against the persistent corporate branding of all human experience. And sure enough, Lasn chooses the no-name brew. But then he shrugs, and adds an explanatory footnote: "I find Starbucks too bitter."

Lasn will not be branded, pigeonholed, certainly not by others; he will not be who you expect him to be.

Start with his reputation for being fierce and uncompromising, a gnomish tiger. Today, he seems like nothing more than a spirited 70-year-old who has wandered in off the street, carrying a battered brown briefcase with a copy of The New York Times folded up inside. (Touring the Globe offices, he repeatedly expresses an old-fashioned thrill about the creation and production of a daily paper.)

In town for only two days, he has failed to pack for an impending winter storm.

He is wearing a worn pair of sneakers and a thin jacket more suited to the weather back home, on the outskirts of Vancouver.

You suddenly want to take him shopping, this anti-shopping fellow (even if you're not much of a shopper yourself), because he reminds you of somebody's father, and you just feel he should have some appropriate footwear. He doesn't carry a cellphone.

And yet, ascetic as he seems to be, he comes bearing gifts: a newly published 400-page collection of essays and arresting visuals, that he's edited, called Meme Wars: The Creative Destruction of Neoclassical Economics. He says he hopes it will be a new model for textbooks – one that is visually stimulating, has no page numbers, and speaks of the world as it is rather than as economists would like it to be.

But while he may want students to buy it – a large-format paperback copy sells for about $30 – he has also conspired with his publisher to print 1,000 copies of a $100 coffee-table edition, packaged in a box and featuring thick, stiff, dark grey sandpaper on the front and back covers. "This is a PR stunt," he nods gleefully, sipping his coffee in a quiet meeting room. "I like this idea that you have a metaphor for what this book is supposed to do, which is to rub out all those neoclassical tomes on the bookshelves of universities around the world."

Lasn has a talent for high-concept marketing, but like many of his generation, he is having some difficulties adapting to the new ways of grabbing attention. Adbusters still sells about 90,000 copies every issue, he says, but the number has been dropping over the past few years under pressure from other, more digitally savvy outlets. The twentysomethings in his office have been pushing him to publish on other platforms – and so Adbusters is doing so, on Flickr, on YouTube, on Tumblr etc. – but he's a romantic about that printed magazine. And, frankly, it's getting harder to make money with any of it.

Still, he's certainly learned his way around Twitter hashtags, one of which managed to spark a global movement with a little help from an old-fashioned magazine. The July, 2011, edition of Adbusters featured a one-page poster, a striking visual of a ballerina balancing atop the iconic bronze Wall Street sculpture of a charging bull, and the question, "What is our one demand?" Above: the hashtag call to #OccupyWallStreet on Sept. 17 of that year. ("Bring tent," it added.)

"Occupy was something special, it was actually a moment when young people stood up and said, 'The future doesn't compute and I'm going to start fighting for a different kind of a future,'" says Lasn. "It was a beautiful moment." He was especially heartened by the many newbies at Occupy, people who had not previously been politically engaged. "It was a fresh kind of a lefty thing," he notes.

But then, he says with unmasked disdain, "all the lefty luminaries – [Slavoj] Zizek and Naomi Klein and all of those people suddenly sort of appeared there in Zuccotti Park and tried to be part of it."

(Later, he will say, "That old left-right thing – man, I hate it. I've been saying for the last 15 to 20 years in Adbusters: We have to jump over the dead body of the Old Left. And of course I hate the rabid right as well, especially the one in America, but I have a feeling that this new political wavelength that young people are on will be some sort of strange hybrid of the left and the right.")

When Occupy fizzled after only two months, Lasn says he wasn't surprised. After all, the French student riots of 1968 also fizzled, but they were a seminal moment for him, then in his mid-20s. "I'm still in the glow of 1968 myself," he says, his chest puffing up a little now; he believes those who participated in Occupy will continue to carry that experience throughout their lives, too.

Still, he knows he can't continue with the same culture-jamming tactics he's been championing since the launch of Adbusters in 1989. Back then, it was a radical move to co-opt and repurpose, say, the Nike swoosh to create a twisted advertisement targeting Nike for its labour practices. Now, that remixing and repurposing are part of pop culture's DNA.

And something else has happened to Lasn since then, the very same thing that happened to other rebels and their causes. Just as large record labels bought up and systematically defanged rock 'n' roll (and made billions of dollars doing so), multinational corporations have co-opted many of the anti-corporate philosophies and tactics championed by Adbusters, and deployed them as canny marketing manoeuvres. Companies have proved surprisingly adaptive, turning Lasn into a punk who has been punked. "They've stolen our style, somehow," he admits. "It's a cat-and-mouse game."

And so his own approach is evolving. "All those old tactics of the past, they've never really worked all that well," he acknowledges.

But the success of Occupy offered a guide, if not a template, for how Adbusters and its ilk might spark cultural changes. Last December, the magazine called on people to embrace a less commercial version of Christmas. Few seemed to take up the call, or even use the #BuyNothingXmas hashtag on Twitter. Lasn says he is untroubled by the lack of action. "Even when we put out #OccupyWallStreet, we had no idea it would explode to be what it was," he notes. "We float many hashtags, and one in 10 sometimes gets a bit of traction."

Lately, they've been trying to get some traction around a #Goldman hashtag, in hopes of sparking demonstrations at each of the 72 offices of Goldman Sachs. He speaks of "vigilante justice."

"If we feel one corporation is very close to being a corporate criminal, and we want to bring it down, then I think, using the power of social media and the Internet, we don't have to rely on the courts any more or boycotts. We actually have the power now to start really hurting the bottom line of corporations."

There is still time for #IdleNoMore to learn the lessons of Occupy
January 11, 2013 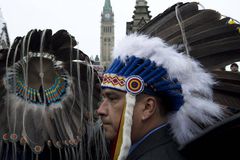 Canadian activists put out a simple Twitter hashtag: #OccupyWallStreet. After that, 'it just went crazy'
December 21, 2011 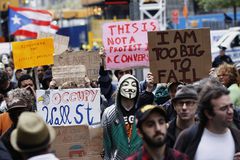 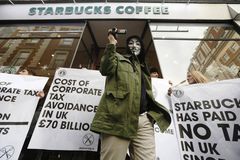