It's fair to say the riddle of gender has engaged Kathleen Winter for some time now. Her 2007 collection of short stories, boYs, limned the daily disconnections between the sexes, major and minor, that keep us from fully comprehending one another. So the fact that she chose a hermaphrodite as the main character for her first novel represents a natural progression: The baby is a literal union of the sexes.

For the first few days of their baby's life, Jacinta and Treadway do not discuss the fact of its ambiguous gender. When it does finally come up, Treadway's is a rational and logical response, built on his instinct to protect his child. In deference to the more obvious of the child's sex organs, Treadway decides that they will name him Wayne and take him to hospital for the necessary surgery. Both Jacinta and her friend Thomasina silently demur, each nurturing his female side in her own secretive way. Jacinta writes "daughter" in the mustard on his sandwich, and Thomasina calls him Annabel, after her own dead daughter, when she's alone with him.

Scenes from Wayne's childhood in early-1970s Labrador are seeded with the discontent inherent in this situation; although the child has not been explicitly told about his other self, it manifests anyway. He loves to watch synchronized swimming with his mother and longs for a bathing suit like the swimmers wear. (If God is in the details, this novel is holy with early-seventies pop-culture references.) His hair is soft and fine, he prefers drawing to hunting, and his best friend is a girl. Treadway attempts to counter these departures with increasingly ardent attempts to masculinize his son, culminating in a backhoe ballet that he has commissioned. The scene is at once absurd and heartbreaking.

Wayne complies with his father's direction while pursuing his own passions, becoming obsessed with bridges at the age of 12 when these begin to appear on the postcard dispatches of the travelling Thomasina. With his friend Wally (diminutive for Wallis; Winter chose gender-neutral names for Wayne's confidants), he builds one of his own, modelled on Florence's Ponte Vecchio. On the bridge, Wally spends hours trying to learn a song from an opera she heard once, singing long into the night, while Wayne studies and sketches famous bridges, these a handy analogue for the possibility inherent in his existence. Decked with swaths of fabric, gilt chain, tassels and Christmas lights, it's hardly the fort of Treadway's youth.

What Treadway does about the bridge is unsurprising but no less harrowing for that. Wayne's mute response in the face of what is surely one of the greatest tragedies in his young life underscores the fact that this is a novel about secrets and silences, almost everyone around Wayne backing away from difficult truths even as he continues to puzzle through the contradictions of his existence. The disappearance of the bridge is not discussed, not even by Wally and Wayne, and if that weren't cruel enough, Wally stops speaking to Wayne, though she surely understands that he bears no responsibility for what happened. The event becomes one more buried secret.

Even if Winter occasionally ennobles her characters to excess, each is multifaceted and flawed, enacting subtle betrayals of Wayne even as they try to understand and support him. In this, Winter shows a willingness to dwell in uncertainty: Never does the novel succumb to easy answers. "Everyone is a snake shedding its skin," Thomasina tells Wayne. "We are different people through all our lives."

Wayne's latent gender won't be wholly contained, neither by the machinations of the medical world nor by the constraints of his community. When he reaches puberty, his body makes a decision requiring his hospitalization, the full causes of which he doesn't learn until years later. His subsequent move to St. John's to chase the truth of it is a measure of his strength of character. Even when he falters, Wayne possesses more courage than anyone around him.

Annabel is less about chromosomal anomaly than it is about human potential, for cruelty and neglect and ignorance as much as for tolerance and generosity and strength. What Winter has achieved here is no less a miracle than the fact of Wayne's birth. Read it because it's a story told with sensitivity to language that compels to the last page, and read it because it asks the most existential of questions. Stripped of the trappings of gender, Winter asks, what are we?

Christine Fischer Guy is a Toronto writer whose short stories have appeared in Descant and Prairie Fire. She has just completed a novel set in Moose Factory, Ont. 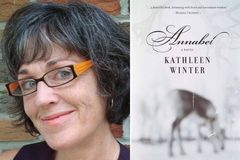