Back then, the Maritimes weren't the convivial hotbed of cozy cable-knit sweaters, interesting facial hair, pint-clinking and interminable fiddle music we've become accustomed to through beer and fish-stick commercials. Like: did you know that 1815 was colloquially referred to as "The Year of the Mice"? It's true! Packs of mice decimated crops, arriving in such abundance that their waterlogged corpses were lining the coast. These hardships were rewarded in 1816, called "The Year Without Summer" (which sounds like something out of Game Of Thrones), during which an abiding winter frost proved a significant hassle for agriculturalists who had just spent the last year shooing packs of rodents into the ocean. As one merchant noted, in the years following the War of 1812, "an [sic] universal gloom had settled over the province."

But comedy, we're so often told, is born out of the muck of such misery. The world is dumb and brutal and awful. Might as well laugh at it. So it makes sense that one of the earliest examples of humour in Canadian literature was born into gloomy, post-Treaty of Ghent Nova Scotia, which seemed as lousy a place as any for the seeds of a Canadian comedy sensibility to take root.

Enter Thomas McCulloch, a Scottish-born Presbyterian minister. Between 1821 and 1823, McCulloch ghostwrote a series of letters to The Acadian Recorder, a Halifax-based weekly. McCulloch assumed a couple different personas, the most common of which was Mephibosheth Stepsure, a send-up of a simple, homespun farmer. Through Mephibosheth, McCulloch satirized what he perceived as the "idleness" of many in the post-1812 Maritimes, where the spoils of a wartime economy and a new rush of immigrants who had taken to agriculture while knowing little to nothing about the actual labour of farming had tainted the ethic of hard work, diligence and self-sacrifice. Creditors and debtors seem especially frequent targets of Mephibosheth's finger-waving scorn.

McCulloch's sketches of the locals seem to foreordain the folksy caricaturing of Stephen Leacock and Stuart McLean. (In his first letter, Mephibosheth describes a neighbour in comically quotidian terms, calling him "completely an every-day character. His exact likeness may be found at any time, in any part of the Province.") Yet these letters also feel very self-consciously connected to the work of Scottish authors, stuff like John Galt's epistolary novels and John Gibson Lockhart's sketches of daily life in Glasgow and Edinburgh in Peter's Letters to his Kinsfolk – a sign that the editors of the Recorder were knowingly playing to Nova Scotia's Scottish diaspora.

With the exception of his flair for jokey names, many of which are proto-Pynchonian in their stupidity (Hob Gosling, Mrs. M'Cackle, Miss Sippit, Old Grub, etc.), McCulloch's style is too dry and observational to really register as funny – like really, socked-in-the-gut, laugh-out-loud funny. There are times when the observations are so parched that they run close to deliberate bathos; the counterpoint between the apparent absurdity of a scene and Mephibosheth's matter-of-fact description of it produces, well, if not a joke, then at least the whiff of one. (Maybe jokes about pigs messing around with butter churners don't really translate nearly 200 years later.) Still, as Montreal-based author and radio host Jonathan Goldstein (more on him in the coming weeks) has noted, the difference between a comedian and humourist is that nobody actually expects a humourist to make you laugh.

Humour's aim, I guess, is different. In the opening dispatch to this series I quoted a phrase from Mavis Gallant – "subversive without knowing" – which I kind of hoped would serve as a theme to this whole inquiry into Canadian humour. McCulloch's conservative satire doesn't really feel all that subversive. Unless reasserting a set of core traditional values in the face of the slothful and idle qualifies as subversive?

There's a palpable, and downright hectoring, sense of social obligation in McCulloch's tugging at the frayed edges of pre-Confederacy Canada's social fabric. It's deadpan and slyly self-critical, like much of the best satire. Yet the restraint grates: as if to actually laugh were gauche, a base eruption of bodily unselfconsciousness as crude and déclassé as a fart. (Incidentally, there is, by my count, only one fart joke in Mephibosheth's collected letters.)

Maybe it's my own hearty Scotch-Irish stock, but broad satire un-cleverly shaming you into working harder just kind of rubs me the wrong way. Especially when it's couched in what are ostensibly jokes. It's like the humour equivalent of tricking a bawling baby to eat their protein-enriched vegetable paste by pretending the spoon is an airplane.

Next week: we get closer to embracing the scatological by introducing an enduring archetype in Canadian humour: the Ugly American.

The front lines of funny: Exploring how Canadians became so hilarious, one book at a time
July 4, 2014 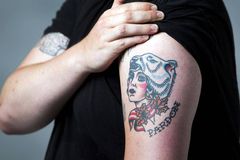