Clara Thomas was a dedicated scholar of an emerging academic study called CanLit, plunging deep inside Canada's letters and concluding that our authors, writing in the shadow of the empire, were ghost-haunted and ghost-obsessed.

"[But] it is only when one of the ghosts has invaded, taken a seat in the imagination of the writer and then insisted on his reincarnation in the word that a Hagar Shipley, a Dunstan Ramsay … moves into the literature – and the mythology – of a country," she wrote.

As well as teaching pioneering courses in Canadian literature, Prof. Thomas took the brave step of assigning Québécois authors in translation, including Ringuet's Thirty Acres and Roch Carrier's La Guerre, Yes Sir! As the first woman hired in the English department at York University, and the second woman to be hired at York, where she taught for more than 40 years, Prof. Thomas was convinced that Virginia Woolf didn't get it quite right.

Key to a woman's autonomy is not having a room of one's own; it's having cold hard cash.

"I believe that you can create your psychological space," Prof. Thomas wrote. "I learned, early in my career, to prepare my lectures while scrubbing the floors and minding my two sons. Women need to have money of their own to feel independent."

As it turned out, Prof. Thomas had a triple workload in those early days as a faculty member: minding her children, teaching, and fighting sexism.

In 1961, when York opened its doors, she asked her boss why her pay was less than that of her male colleagues. He responded by reading a memo from the president warning department heads to "beware of hiring women."

Prof. Thomas's gender also excluded her from sitting on academic committees. Instead, she focused her energies on dusting off neglected Canadian female authors who had been cast into the gloom of obscurity.

Nineteenth-century writers such as Anna Jameson, Susanna Moodie and Catharine Parr Traill inspired her with their tenacity and captivating Canadian storytelling about roughing it.

Ms. Jameson, author of Winter Studies and Summer Rambles in Canada, was an early travel writer with her pre-Confederation view of the country. She was also a highly regarded intellectual.

Prof. Thomas died in Strathroy, Ont., on Sept. 26 at the age of 94. She leaves Morley Thomas, her husband of 71 years, son Steve, daughter-in-law Mary Attfield and grandson Tyler. Her younger son, John, predeceased her in 2007.

After a rocky beginning, Prof. Thomas and York became excellent friends. In 2005, the Clara Thomas Archives and Special Collections was established at the university to honour her work.

It was with thanks to Prof. Thomas that the university acquired Margaret Laurence's papers, deemed to be the jewel in their collection, as well as the literary estates of Adele Wiseman and Toronto East York mayor True Davidson.

"[Prof. Thomas] established a spirit and a precedent at York for the study of Canada, especially in literature," said Prof. Lennox. "[And] I think the effect of it was one that helped consolidate York's strength in the Canadian field."

Like a character from an Alice Munro story, Clara McCandless was almost born "out of wedlock," on May 22, 1919, to two young people in a southwestern Ontario town. She emerged, with a shock of red hair, a mere two months after their wedding.

Her mother, Mabel Sullivan McCandless, determined from the start that Clara would confound all comment by being "front and centre … an achiever from the very beginning."

Mabel ran the local dress shop and Basil McCandless, Clara's father, owned the grocery store where his brother worked as the butcher. As a little girl, Clara would pop by the shops after a wild afternoon spent playing Tarzan of the Apes, swinging on wild grapevines with her best friend Agatha.

Although she was in love with all things bookish, school was a repressive and cruel climate for Clara. She recalled the teacher strapping native kids who were tossed out of the way at the back of the schoolhouse.

"Certainly the two Indian girls were far bigger and older than the rest of us, and they were isolated and shunned, first by the teacher and then, following that lead, by us," she wrote in her memoir.

Meanwhile, back at home, her grandfather insisted that Clara's future include a university education. She never deviated from the goals set down so early.

In 1937, she began studying at the University of Western Ontario, where within weeks she fell in love with a fellow freshman named Morley Thomas. She slipped into the world of English literature, but was unsettled by the dearth of Canadian authors on the syllabus. Something wasn't quite right, and she set her mind to correct it.

She graduated in 1941 with a BA and married Mr. Thomas the following year in Winnipeg, where he was stationed as a meteorologist. While there, she taught university courses to servicemen at the flying school in Dauphin.

One searing memory remained from those days. During a wives' meeting at the station, the wing commander burst into the room unannounced. "Two of you women have just lost your husbands," he shouted, moments after the crash of a Cessna.

A short time later, she returned to Ontario and worked at the Western library while completing her master's degree. She quickly dropped her original thesis topic on the American novelist Thomas Wolfe's You Can't Go Home Again in favour of focusing on Canadian authors.

It was such a radical idea that at first the authors whom she contacted, so unused to being sought out, thought she was invading their privacy and hesitated to answer her questions.

William Arthur Deacon, then-books editor at The Globe and Mail, caught wind of her project and was intrigued. He invited her down to the paper for a chat over roast pork and mashed potatoes in the cafeteria, and offered to help her in any way he could.

"He talked and acted as if I were doing something rather important, and certainly something that hadn't been done before," Prof. Thomas wrote.

At the end of the war, she and her husband moved to Toronto, where their son Stephen was soon born. She split her time between being a housewife and teaching extension courses to Western students.

Around the time Stephen started kindergarten, she applied to the University of Toronto's English PhD program. But she was sharply reprimanded in writing by an administrator who shamed her for attempting to carve out her own career. Was she trying to compete against her husband?

"It was really a wicked letter, and the fact that I heeded it without question speaks for the position of women in the scholarly world at that date," she wrote.

She had a second son, John, and waited another seven years to apply again. This time she was accepted, and Northrop Frye was assigned as her supervisor. He fully supported her interest in Canadian content and urged her to publish her thesis on Anna Jameson as a biography with University of Toronto Press.

She finished her doctorate in 1962, after being hired the year before by the English department at York.

Over the course of her career, Prof. Thomas was elected to the prestigious academic Royal Society of Canada and granted honorary degrees from York, Trent and Brock universities.

She is best known for her books on Margaret Laurence, including The Manawaka World of Margaret Laurence. Among her other publications are Canadian Novelists: 1925-1945, Love and Work Enough: The Life of Anna Jameson and William Arthur Deacon: A Canadian Literary Life.

Prof. Thomas retired from York in 1984, but continued publishing until 2007, including her 1999 memoir Chapters in a Lucky Life, and a score of book reviews in academic journals.

For many years, she cut a striking figure on campus with her erect posture, perfectly coiffed hair and steady determination. And, said Prof. Lennox, she damn well knew irony when she saw it.

In 1993, they attended a literature conference in Italy. The hotel managers where the conference was held piped in the national anthems of Italy and Canada – but they accidentally, and in ignorance, played Rule Britannia.

Legal scholar Michael Mandel stoked the fires of debate
May 11, 2018 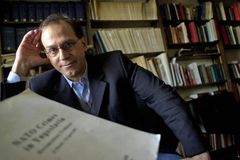