If you ask Miriam Toews about the difference between fiction and non-fiction, she pauses, makes a few false starts, offers a thought or two, and finally dismisses the question. "All of these terms, I don't really care much about them," she says, leaning back into the couch in the living room of her home off Toronto's Queen Street West. "I feel they are a little bit irrelevant in terms of talking about literature, because I think so much of what we do is a combination – whether it's non-fiction or fiction – of truth and imagined."

It's a telling observation – Toews has just published her most autobiographical novel to date. All My Puny Sorrows is the story of how a Toronto writer named Yolandi tries to save her sister, a Winnipeg pianist named Elfrieda, from depression and suicide. The disorganized and frantic Yoli, herself in the midst of a divorce, shuttles to and from her Toronto house (where she has left an 18-year-old supervising a 14-year-old) and a psych ward in Winnipeg. Like all Toews's work, the novel is at times very funny, but the threat of tragedy hangs heavy: Yoli and Elf have already lost their father to suicide.

In 2010, Toews's older sister, Marjorie, orchestrated a copycat suicide: Twelve years after their father, Melvin, put himself in the path of a coming train near his home in Steinbach, Man., she did the same thing. In 2000, Toews had published Swing Low, a memoir in which she adopted her father's voice, in the first person, to examine a productive and loving life lived under the continual shadow of depression.

So, is this new novel actually fiction?

"It's a combination of things that happened, conversations that happened, but I call it fiction because not all of it is verbatim," she replies. "This is a cliché, but in fiction I feel it is easier for me to get to some sort of truth, some kind of more honest writing."

The honesty here is all about mental illness: Toews is well-acquainted with the real pain felt by the depressed, and the fear and frustration their families experience in the face of it. "For my father and my sister, they had struggled so long and so hard. I think that is what people don't understand," she says. "When Yoli says to Elf, 'Now, you have to start fighting,' Elf says, 'Yoli, I have been fighting for 40 years.' The fact they lived for as long as they did, accomplished what they did, had relationships, had joy when they did, is remarkable.

"The isolation, the inability to function, to feel anything, any happiness, any spark – you just feel dead inside. The psychic pain is as palpable as physical pain."

The anguish can baffle and frighten outsiders. In the novel, Toews has fictionalized the two sisters' career paths for telling reasons. With self-deprecating humour, the author gives Yoli a career writing pulpy teen rodeo novels, although she is now attempting a literary breakthrough. (It's something about boats, and doesn't sound very promising; she lugs the manuscript around in a plastic bag she is always mislaying.)

And with thematic purpose, Toews has greatly enlarged on her sister's vocation as a pianist, making Elf a world-renowned soloist whose flamboyant Italian agent is desperate to know if a rapidly approaching tour will have to be cancelled.

"A lot of times people think that it doesn't make sense for people to be depressed when they have everything, a loving husband, a successful career, fame and fortune," she says. "I wanted to make this point that profound despair can strike anybody."

For their nearest and dearest, that despair can remain deeply frustrating. "A depressed person is often a person who will push others away. If you are pushed away, and pushed away and pushed away, you have to have an enormous amount of inner resources to keep going back," Toews observes, recalling a minister who, when most of her father's friends had dropped away, would simply come and sit with him without talking much and without making judgment.

In All My Puny Sorrows (the title is drawn from a poem by Coleridge), it is Yoli who just sits and holds her sister's hand and tries not to judge. She also debates whether she should help the desperate Elf make a graceful exit by taking her to a clinic in Switzerland, where assisted suicide is legal.

It is heart-wrenching territory, and the real events seem perilously recent to fictionalize, but Toews explains that is how she processes life. "For the first two years after she died, I wasn't writing at all. I was grieving," she says. Recently separated, and with her children approaching adulthood, Toews had moved to Toronto from Winnipeg about a year before her sister died; her mother joined her soon after Marjorie's death. Living in separate apartments in the same house, Toews once described the pair of them as "refugees from a hard place, the past." But they successfully built new lives.

"I thought I would write another book, but I did not know about what," she says. "At a certain point it became pretty obvious." Writing became both a form of grieving and a path forward: "It was kind of a way of keeping her alive. It was the same thing for my dad when I wrote Swing Low all those years ago. It was a way of being with them. At the same time, when you are writing narrative, there is a certain distance that has to occur so you can focus on the story.

"When everything does seem out of control, writing fiction is a way I can order that chaos and restore some sort of meaning. I like the playful aspect of writing fiction. You know how it is when we are kids and we make up our worlds: You be this guy and I am going to be this guy, and we are going to go slay dragons. It is what my brain needs to make sense of things."

However you define fiction, Miriam Toews is going to keep writing it. 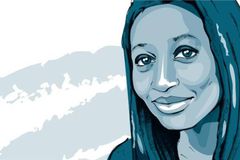 Book Review
Updike: What kind of biography do you write when you are the closest thing to being John Updike’s son?
April 4, 2014 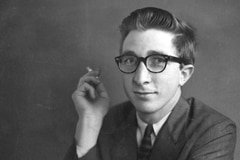