David Ellis cruises through British Columbia in his tricked-out white van, trying to avoid any bumps in the road. Loaded inside, into compartments he had custom-built, are hundreds of books – a meticulously packed rolling history lesson that he peddles to the people who have lived it.

Ellis roams the province with his wares – an enormous collection of books and documents that he sells primarily to First Nations communities. He goes from reserve to reserve – often very remote communities – or sets up shop at a local chamber of commerce or public library, a little sandwich board outside advertising the rare First Nations books on offer.

As much a self-taught historian as a travelling salesman, Ellis has an encyclopedic knowledge of First Nations history and the inventory to match.

“I’ve built up a complete bibliography in my head and I’ve built up the stock,” he says toward the end of a long, mostly quiet day at the Squamish Nation’s Totem Hall, surrounded by banker’s boxes stuffed with merchandise. “I’ve got at least 2,000 books when I go out.”

Compiled over 44 years by Ellis and his father before him, this is the largest and most comprehensive collection of books on Western Canadian First Nations ever assembled, according to Ellis. Not simply a book-selling venture, the collection includes key documents that can be used for rights cases, reparations and education programs.

“My dad always said Canada’s only as good as we make it,” Ellis says. “So it’s not only supplying books, but also I’m an advocate.”

To Squamish he has brought everything from YA novels and memoirs by First Nations elders to a detailed 1989 report on herring spawning areas (“It’s a very good report; nobody’s bought it yet, but they will”), and a U.S. Coast Guard safety assessment on liquefied natural gas. 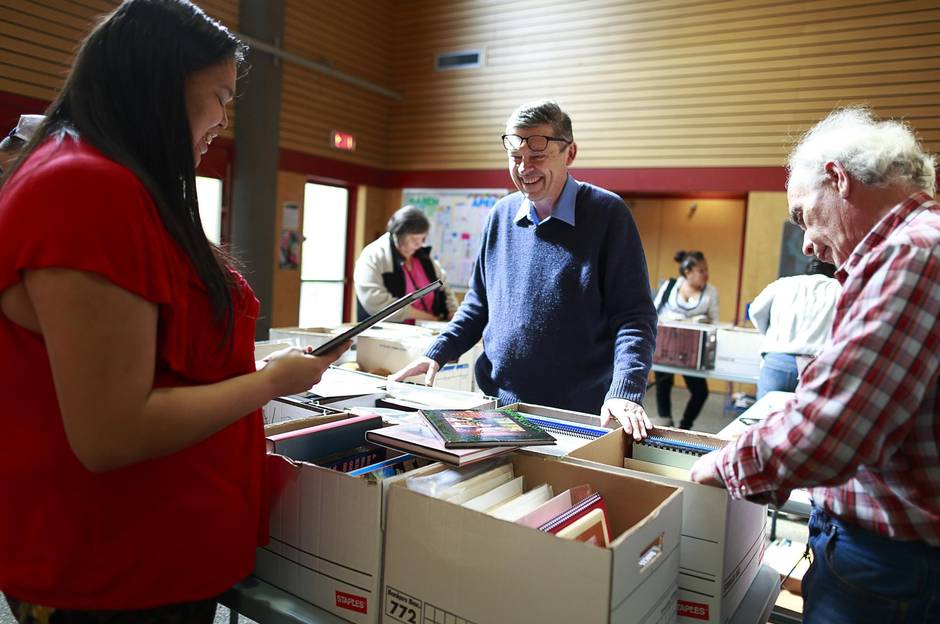 “I have a hell of a time sourcing this stuff, I tell you,” he says, holding up the LNG report in its plastic covering. “I have to dig, dig, dig, dig.”

He’s also brought old books with some uncomfortable titles and content – such as the 1920s Canadian history textbook All About Indians and a 1975 memoir by Princess Pale Moon, a Cherokee-Ojibwa woman who literally tries to wash the colour from her face, despising her “dark skin, dark hair, dark eyes. Darkness was my curse.” It’s startling to stand in a First Nations community hall and read such a passage.

“There’s certain books people don’t really like at all, but I still bring them because people actually want them ’cause they want to study them,” says Ellis, who is not native himself, but of European descent. (Sometimes he takes heat for that, he says, being a white guy selling native books.)

“The word ‘Indian’ you can’t get rid of. Otherwise you’d have no books left. Some libraries make the mistake of throwing out all the books with [the word] ‘Indian.’ They have no native books left. You can’t do it, eh?”

His stock includes scarce, out-of-print books that he sources primarily from other booksellers – hunting them down online or in person during his travels around Western Canada.

“People think I get them from garage sales, but it’s a statistical impossibility to get this rare stuff from them,” says Ellis, who is known in many of these places simply as “the book man.”

After nearly 25 years in the business, Ellis says he knows exactly what’s going to sell where – Shaker Church books do well with the Squamish, Lake Cowichan and Stz’uminus First Nations. The Kwakwaka’wakw have a lot of interest in Franz Boas. Marius Barbeau is the big seller in the Skeena. Ellis calls it “precision book selling.”

This business was his inheritance. His father, Bill Ellis, worked with famed Haida artist Bill Reid as an art agent, and through that connection became close to the native community. After Bill Ellis sold his native art print business, he developed a new vocation – collecting and selling books about First Nations from his home on Haida Gwaii (then officially called the Queen Charlotte Islands).

When Bill Ellis died in 2002, David inherited the books – about 23,000 of them. While the father had concentrated his sales efforts on coastal First Nations, the son spread out across the province, up to the Yukon and Northwest Territories and into parts of Alberta. (A sales trip to the U.S. a few years back had to be aborted because of customs issues.) He has since built up the collection to about 100,000.

“What I’m trying to do is a full bibliography for each First Nation in B.C. It adds up to a lot of books,” says Ellis, who has a master’s degree in natural resource management. (He’s still engaged on environmental issues, regularly sending out lengthy e-mails on matters such as the English Bay oil spill, fish stocks, LNG and pipelines. “I can give you an opinion on everything,” he says.)

What he’s selling – often historical and rare – doesn’t come cheap. In Squamish, for example, he’s brought along a 1916 McKenna-McBride Royal Commission document with a $1,000 price tag.

“That’s a very important legal document,” he says, later noting that some of his books reach that price based on courtroom value and scarcity. More than a good read, Ellis’s book stock can be and has been used in legal cases – historical maps and ethnographic data can be important in land claims, and he says his material has come into play for the Tsilhqot’in, Nisga’a and Williams Lake First Nations. 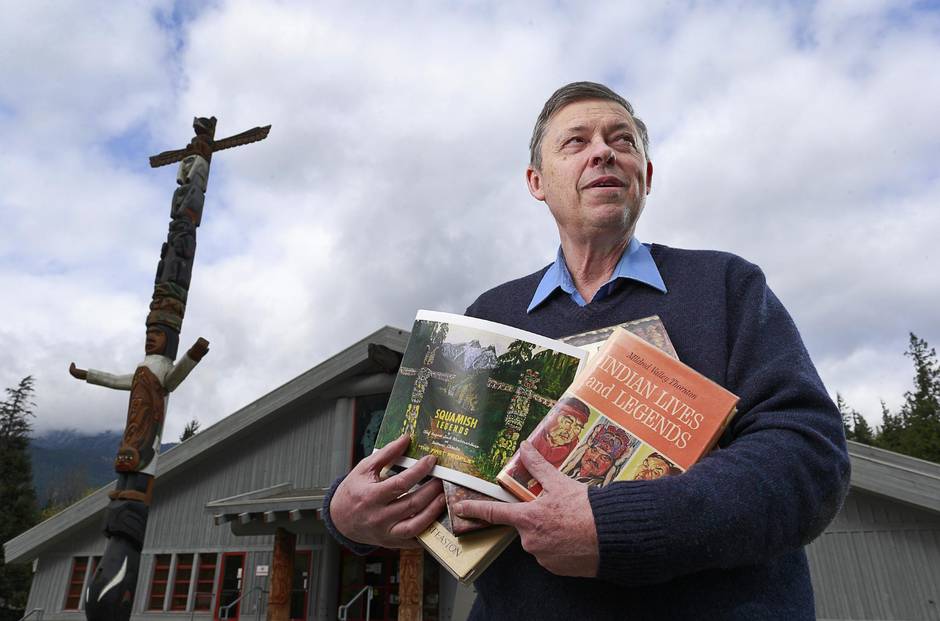 David Ellis has built up a collection of 100,000 First Nations books and documents. (Jeff Vinnick for The Globe and Mail)

“I wouldn’t claim any direct credit, but I’m helping them and their lawyers to get data; that’s one of my key selling points. Because I’ve got the depth of material,” he says.

Further, books on residential schools have been used to prove residency at a school and thus helped determine reparations.

Sometimes the discoveries are happier; Ellis has united people with a book that unexpectedly includes a picture of a family member – maybe an ancestor they never met.

“If I’m doing my job right, it happens every day,” he says.

Ellis brings along old newspaper articles for the same reason. “It doesn’t pay, but it’s fun.”

For his first 14 years as a bookseller, sales to schools around the province accounted for at least half his business, but “that’s completely gone now” he says, because of shrunken budgets.

His merchandise isn’t all rare and pricey; he also brings along a box of bargain books, priced at $5 apiece. As for the rest, there’s so much that goes into the price – his hefty knowledge, accumulated over the years, which informs the acquisitions to begin with. Then there’s all the labour – the sorting and storage, the driving and setting up shop from place to place to place, then all that work upon return.

“When I come home I have to put it all away, book by book,” he says in his “office” – a Vancouver storage facility where he spends his non-travelling days, filing new acquisitions and packing and unpacking from his road trips. He rents four full units, each outfitted with custom-built shelving and categorized by Nation.

“You’re dealing with things that are heavy,” he sighs. “I should have gone into real estate. It’s lighter.”

Some trips are tremendously fruitful – a couple of times he has sold a library worth of stock in a day to First Nations building their own collections. Sometimes, the trips are a bust. There was one remote area he drove out to three times – nearly 500 kilometres each way – and each time, for one reason or another, he had to turn around without even setting up. “And it was a long and bumpy road hammering the hell out of my old van,” he says. “Eventually I sold them a lot of books, but it takes a lot of patience, you know?”

This season has already been busy – he’s travelled to Vancouver Island, Alert Bay and the northern B.C. Interior. In the Yukon, he scheduled a different First Nation most days, driving overnight.

Winters are quieter. Travel being more difficult, he spends time dealing with the collection and at Christmas he sets up shop at a little mall across from Vancouver City Hall.

In truth, it’s barely a living. (“What I tell people is my wife pays the rent; I buy the refrigerators.”) But it’s a way of life.

However, at 64, Ellis is getting ready to shelve the venture: he’s looking for a buyer. He has three daughters, none of whom is going to take over the business.

“I can’t do this forever,” he says on the line from Penticton, during a slow period in mid-July. He talks about selling in two, maybe three years to somebody who might expand the business to all of Canada – possibly even worldwide.

“Maybe a German guy who likes to visit exotic places and interesting people. Somebody with money,” he says. “More money than I have.”