Bob Woodward normally writes the first draft of history. But ever since he published his latest book in September, people have been asking him to predict the future.

And so here he sits in a Toronto hotel bar on a recent afternoon, doing his best Nostradamus impersonation, trying to draw on 18 months reporting and writing The Price of Politics – an exhaustive account of last year's unresolved talks between the White House and Congress over the debt-limit crisis – for those who hope it might offer some guidance on the current "fiscal cliff" showdown in Washington.

"My assessment is, there's a better-than-50-per-cent chance they'll fix it, but that it's not much more than 50," he says. "It could go off the rails. There are a lot of moving parts."

For Mr. Woodward, even offering this hedged prognostication seems like a fraught task. It is not his nature to minimize the complexity of large problems just because the modern world demands it. He reaches into his jacket pocket and pulls out a four-page, single-spaced document that outlines the final offer Barack Obama made to the Speaker of the House, John Boehner, last year; mind-numbing in its details, it might prompt a wonk to conk out.

"Everything's driven by impatience and speed," he notes, wincing a little as holiday revellers behind him become more boisterous with booze. "This book – you go through it, it's very detailed. People ask me, 'Well, what's the soundbite of your book? Obama up? Obama down?'"

Admittedly, Mr. Woodward does have a soundbite he's been retailing on the lecture circuit over the past few months. But it's not the sort of quip that sends a book racing up bestseller lists: "Presidents work their will – or should work their will – on the important matters of national business," he says in the book's conclusion. "Obama has not."

Still, The Price of Politics has sold impressively well, spending – as is the habit of every one of Mr. Woodward's long-form works – a handful of weeks on influential bestseller lists despite reviews like that of New York Times critic Michiko Kakutani, who called it "depressing and often tedious." (Even the author admits it is "exhausting" as well as exhaustive.)

But the truth is, that's not what makes him one of the four boldfaced names featured in this season's Grano Speaker Series, the North Toronto salon suppers that offer power players and money managers a chance to rub elbows with famous U.S. thinkers.

Mr. Woodward of course is and forever will be one half of the dynamic duo that broke the Watergate story (and, less salutarily, bequeathed the "-gate" suffix upon umpteen major and minor scandals over the past four decades).

Fame without the flash

He is an odd creature to be so celebrated, a serious man made infinitely more interesting by the fact that he helped bring down a sitting U.S. president, wrote a book with the far flashier Carl Bernstein about the experience, and was then played by the 1970s sex symbol Robert Redford in an Oscar-winning film adaptation.

Mr. Woodward carefully tends the flame. At Grano, as he takes the floor toward the end of the dessert course, he draws a strained connection between the unseasonably warm December evening outside and the fateful date of Saturday, June 17, 1972, which was, he says, "truly one of the nicest days in Washington ever, and the editors sat around and said: 'My God, who would be stupid enough to come in and work today?'"

Mr. Woodward had volunteered to be in the office that day, which is why he was in the team that covered an unusual break-and-enter at the Democratic National Committee headquarters.

The full story took years to report, helped along by fortuitous revelations from a number of government officials. It was plodding, tedious work, but it seemed so exciting in the film version of All the President's Men, especially during the scenes in which Mr. Woodward had his infamous parking garage encounters with Deep Throat, a special government source identified more than 30 years later as a high-ranking FBI official.

Leaks still come to Mr. Woodward, although they are the result of tireless reporting rather than hoping a disgruntled worker will cough up some secrets.

"It's not as if we're sitting here waiting for Daniel Ellsberg to come in with the grocery cart full of documents," he explains. "It's that you're out – asking."

The other Petraeus scandal

Earlier this month, he landed a delicious scoop in the pages of The Washington Post, where he is an associate editor: that Roger Ailes, the president of Fox News Channel, had attempted to draft Gen. David Petraeus in the summer of 2011 to run for the U.S. Presidency as a Republican candidate.

Someone had given Mr. Woodward a copy of an audio recording of a visit that the Fox pundit KT McFarland had paid to Gen. Petraeus; the Post put it up on its website for all to hear, alongside Mr. Woodward's story.

The recording, which ran more than 13 minutes, had a rare raw immediacy and indisputability. "It just reminds us how we don't really get what goes on. We get it filtered through people's recollections – even through people being whistleblowers, people giving you an awful lot of information," reflects Mr. Woodward.

"When I went to interview Obama for the first book, Obama's Wars, I took two tape recorders, like you," he tells me. "And his press secretary, then Robert Gibbs – this was the summer of 2010 – said, 'Oh, Woodward knows a lot about tapes.' And they had a discussion about, 'Can you imagine if everything in here was taped?' So, again, it's humbling to realize that with journalism, we're getting filtered, managed messaging."

That spun messaging, Mr. Woodward implies, is making problems such as the looming "fiscal cliff" even worse.

"Is journalism up to explaining this sufficiently, with the necessary neutrality? Because we have such a polarized media," he says. "I live in that little narrow zone of political neutrality. … There's two ways to look at it: The President has some very strong points to make, and the Republicans have some strong points to make. So they are playing off against each other's cartoons. And then it gets put through the meat grinder of the American polarized media."

Is he really this easygoing?

We have moved out of the bar, which was getting too noisy, and continued our conversation on the drive up to Grano. Now, as we approach the restaurant, with time evaporating, I ask if I might ask him one more question.

"You may ask me anything," he replies magnanimously.

Is it hard sometimes to be neutral, to be dispassionate, when he bumps up against sources that are either intellectually dishonest or just simply dishonest with him?

"Well, then, you just say so," he replies casually.

But isn't it galling?

"Do I get angry?" He mulls this for a moment. Then, making a slight turn, he strides into the restaurant and toward a clutch of a half-dozen guests. The unanswered question hangs in the air.

"Hi, I'm Bob Woodward," he says to nobody in particular.

Simon Houpt is The Globe and Mail's senior media writer. 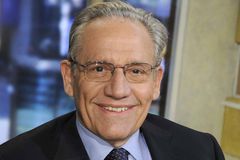 A shocker for Canadians in Bob Woodward's book
September 23, 2010 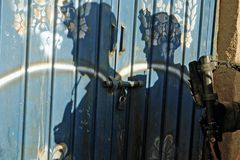 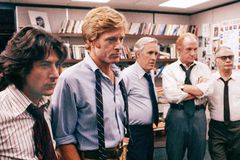