At first, I struggled with this book. Not for lack of enjoyment. On the contrary. Micah Toub's coming-of-age memoir, Growing up Jung, is endearing, funny and insightful. My difficulties arose because, halfway through reading, I realized the fundamental difference between children of Jungian psychologists and children of clinical psychiatrists: Jungian offspring have way more fun, psychically speaking. (In my case, only one parent is a psychiatrist.)

"You have to be the erect penis in your life," Toub's mother intones when our narrator confesses he can't get it up. In this liberal approach to sex education, Toub, age 17 here, is taken to a park and encouraged by his mother to use the process of "Active Imagination" - that is, to imagine himself a penis. "Your name is not Micah, you are not a human being. You are an erection," his mother says. The scene concludes with Toub pushing hard past his mother then victoriously running around the park, a jubilant penis. Micah's boner problems disappear.

Toub grew up in a suburb of Denver. That his parents were practising Jungian psychologists is not a minor biographical note: It was the world he was brought up in. In his story, it means unorthodox parenting techniques and unusual familial discussions, such as "The Toub Family Peace Conference of 1986." But the memoir isn't a criticism of how he was raised, nor of his parents, who are portrayed as warm, loving and thoughtful. And while we see the challenges and pressures of growing up in such an environment - early on, a four-year old Toub makes up a dream to impress his father - the fact is his parents imparted to him a great deal of wisdom.

Toub understands Jung well - he has done his research - and in deciding to write a memoir, he takes the rather daring approach to use Jung to help him understand himself. And it works. In exploring his personal struggles, loves and traumas, the reader identifies with Toub, all the while being introduced to a "practical" Jung: Jung as applied to one man's coming of age.

It's his personal approach, both brave and compelling, that allows Toub to make Jung relevant to a wider audience. He explores his sexuality, relationships, his parents' and his own struggles with marriage, all under the lens of Jung. His writing could easily fall into sentimental or New Age territory, but Toub deftly avoids such pitfalls with tasteful dollops of humour and a healthy skepticism. The book challenges Jung on numerous fronts, and is, among other things, a coming to terms with the religion and ideology he was brought up on, Jungianism.

Carl Jung doesn't have the greatest name in psychology these days, and the Freud-versus-Jung debate is somewhat dated. In mainstream clinical practice, these psychological pioneers were supplanted for several reasons: new knowledge of neuroscience and genetics and the effectiveness of specific and time-limited psychotherapies. Toub acknowledges this. But the fact that newer effective treatments have emerged doesn't diminish these approaches, nor does it reduce the book's relevance. As I was reading his memoir, I wondered if psychology has discarded too much of Jung in favour of its current material emphasis. While some of Jung's theories and predispositions (including his love of séances, views on homosexuality and certain esoteric, spiritual beliefs) may come off as crackers, there are other ideas that are particularly relevant today.

One such idea comes from a follower of Jung's, Arnold Mindell. Toub's parents were disciples of "Arny," a guru-like figure in their hippie Jung world, but Arny's theories are anything but flaky. "Every family has a culture," Toub's mother intones in Arny-speak, thus implying that "the terrorist in the family" is the marginalized one, the one who goes against a family's values, whatever they may be. Arny, according to Toub, doesn't only apply this theory to family dynamics, but has worked in international conflict resolution as well (how successful Arny has been in this role, Toub does not say). Toub sums up Arny's position:

"The very existence of the terrorist comes about because certain qualities are repressed from the mainstream. … Conflict arises in groups … from a need to shift the culture in a direction that is more inclusive and whole. Both the country and the family need to figure out how to integrate the terrorist's qualities and attitudes into the mainstream culture to make the terrorist role unnecessary."

While such a tactic may seem daunting, if not insightful, it warrants consideration in light of our current and largely unsuccessful global war on terror. On a smaller scale, it has relevant consequences for resolving family disputes.

Toub's honest self-examination is both admirable and, at times, too much. There were moments I wanted to pull him aside, to say, "Come on, just go to bed with her already. Does it always have to come back to the anima?" Then again, maybe it does. By the end of his memoir, Toub succeeds in both enriching and challenging the reader's inner life. He encourages us to look beyond our normal, day-to-day skins and examine what attracts and infuriates us, and why, and how we relate to our families and loved ones, and what our dreams are really trying to say. While finding no easy solutions to our messy and flawed lives, he certainly makes the project exciting.

Jonathan Garfinkel is the author of several plays, a book of poems and Ambivalence: Crossing the Israel/Palestine Divide. It will be published in Germany in 2011. 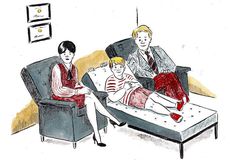