You've got to envy Bob Woodward, an author so busy penning No. 1 New York Times non-fiction bestsellers that he can't spare the time to write a book.

A book contains such niceties as a preface, an introduction and a conclusion. If it consists primarily of a chronicle of events, a passage of analysis occasionally intervenes. There are no such frills in Obama's Wars. A blow-by-blow account of Afghan war-policy-making in the Obama White House, it begins with Obama's election and ends when it happens to end (this past July), presumably with Woodward's publisher breathing down his neck. Woodward isn't a writer but a reporter. Obama's Wars is less a book than a quarry of materials for one.

Nor is Woodward particularly skilled at characterization: His idea of vividness is to offer personal statistics. (In case you were wondering, General David Petraeus's hair is brown and neatly parted and he tips the scales at an austere 5 feet, 9 inches and 155 pounds.) If you think of public types as colourless, Woodward's portrayals won't lead you to reconsider.

Where Woodward excels is in both diligence and access. If there's a transcript of a meeting, he (or his research assistant) has read it. Everyone talks to him, right up to the President himself. He also professes uncanny knowledge of what everyone has said to everyone else. Obama's Wars contains accounts of hundreds of conversations, most of them at one time private. Also, no journalist so excels at cajoling classified documents from officials sworn to safeguard them.

Obama's Wars is depressing reading. Intractable wars make for turbid policy-making. As with the proverbial sausage, you'd just as soon not know what went into it.

In their incessant jostling in the corridors of power, few of Woodward's characters come across as they would wish. Generals (including even Petraeus) figure as unimaginative and inflexible, intriguing to mislead an inexperienced president into acceding to their maximal demands. Obama's closest aides, on the other hand, know little about foreign and military matters and care still less about them. As for the Afghan and Pakistani leaders, don't even ask. On the whole, Woodward avoids judgments in his own name, merely reporting his characters' negative verdicts on one another. (He also transmits some positive ones.)

In its merely reportorial stance, the book eschews any attempt at an authoritative interpretation of the events described. If there's a hero, though, it's Obama himself. Cool and deliberate, he overcomes his inexperience in foreign and military affairs to foil the efforts of the Pentagon to draw him deeper into the Afghan conflict than he wishes. His mind firmly on considerations of expense and duration, he lays down the law to his generals, who counsel a long and costly war. Negotiating the vast gulf between their demands and those of his antiwar core constituency, he manages to craft a policy (just barely) acceptable to both. Under the "terms sheet" of Nov. 29, 2009, the generals get most (but not all) of the troops they want for an "Afghan surge." In return, Obama obtains their acquiescence in a less ambitious operation with troop withdrawals beginning in July, 2011.

But this isn't an upbeat book. The most hopeful ending that Woodward can contrive features Petraeus, who has just assumed command in Afghanistan from Gen. Stanley McChrystal following the latter's media meltdown. Woodward recalls that having taken command in Iraq in 2007 during the darkest days of that war, Petraeus lay down his head on his desk in despair at his initial assessment of the situation.

Yet a recurrent theme of the book is that Afghanistan is not Iraq. More than the latter, it resembles Vietnam in what proved the fatal stumbling block there: the inability of the United States to foster even a minimally stable and competent regime friendly to its interests. And there is the infinitely complex and urgently worrisome problem of Pakistan, which overshadows that of Afghanistan and is joined at the hip with it.

Obama has rejected Petraeus's "fully resourced counterinsurgency" and open-ended project of nation-building in Afghanistan. He has adopted instead a time-stamped policy of early transfer of authority to the Afghan government. For Nancy Pelosi, even this is too much. But it also begs a large question. As everyone in the book who has dealt with the Afghans agrees, this early transfer is a pipe dream. To achieve even this much progress would itself require years of massive counterinsurgency and nation building - if it is possible to achieve it at all. After years of trying, the Americans have accomplished such transfer nowhere. Having endured the zillions of hours of meetings that Woodward describes, Obama must grasp this as well as anyone. Has he decided that of the self-defeating policies available, he might as well opt for the least costly?

Clifford Orwin is professor of political science at the University of Toronto and distinguished visiting fellow at Stanford University's Hoover Institution. 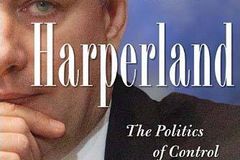