I have often thought that Sigmund Freud would have made a great cartoonist. The affinity between Freud and comics can be seen partially in the nicknames he gave his patients in their case histories. The Rat Man and Wolf Man of Freudian fame could easily be adversaries of Batman and Spider-Man. Freud had an associative mind, famously teaching us to see phallic imagery in all matter of cylindrical objects, ranging from bananas to bazookas. This habit of mental free-association resembles the chameleon, shape-shifting imagery of comic-strip masters like Winsor McCay or George Herriman, for whom a bed could turn into a galloping horse or a mushroom into an umbrella.

But perhaps the best proof for the secret rapport between the Freudian tradition and cartooning is Alison Bechdel's stunning new graphic memoir Are You My Mother?, in which psychoanalytical ideas are brought convincingly to life in pen-and-ink form. In her first graphic memoir, the celebrated bestseller Fun Home, Bechdel depicted her tense and unresolved relationship with her dad Bruce, a teacher who moonlighted running a funeral home (the "fun home" of the ironic title).

Fun Home delineated the tangle of family revelations that occurred when Bechdel came out of the closet while in university, only to discover that her father had a secret life as a bisexual. The unfolding disclosures were cut short when Bruce was killed after being hit by a truck, an accident many in the family suspected was a suicide.

If Fun Home was Bechdel's bid to make peace with the turbulent ghost of her father, Are You My Mother? tackles the even more recalcitrant problem of finding comfort in her agitated relationship with her still-living mother. Helen Bechdel, as portrayed by her daughter, is a very intelligent, witty and accomplished woman, but also often emotionally distant and withholding.

As an adult, Bechdel finds that she's torn between coming closer to her mother and overcoming her hold. Tugged in different directions, Bechdel becomes blocked both creatively and in her personal life. "The thing is, I can't write this book until I get [my mother] out of my head," Bechdel tells her therapist. "But the only way to get her out of my head is by writing this book!"

Bechdel tells us, "I've been in therapy nearly my entire adult life." Not surprisingly, psychoanalytical ideas provide intellectual underpinning for her cartooning. Bechdel's understanding of the mother-child dynamic is deeply informed by the psychoanalytical theories of D.W. Winnicott as well as the thoughts of Freud and Jacques Lacan.

All of which might make Are You My Mother? seem forbidding, but it is actually very accessible, thanks to Bechdel's gift for animating ideas in visual form. One example is an early page where the top tier consists of two panels showing parallel scenes. In the first panel, Helen Bechdel is crouching down over her young daughter as they play a made-up game called "crippled child," where the mother nurses the offspring. In the next panel, a therapist listens to the older Bechdel. Although the idea isn't explicitly articulated, we quickly see that the therapist has become a replacement mother.

These two panels show Bechdel's method in a nutshell. The comics form allows for the juxtaposition of images panel after panel and page after page. There is a further juxtaposition of words and images. Bechdel has carefully orchestrated these juxtapositions to embody the Freudian associational method.

The opening epigram for this graphic memoir is taken from Virginia Woolf's To the Lighthouse: "For nothing was simply one thing." Throughout, Bechdel shows how seemingly simple things merge into each other. The mother becomes the prototype for future lovers and therapists, childhood toys also prefigure lovers, while mirrors serve as the gateway for both self-knowledge and narcissism.

Lacan, of course, has taught us to see mirrors as the perfect metaphor for the fluidity and uncertainty of selfhood. But Bechdel takes Lacan a step further. A cartoonist who fills a memoir with images of herself in rectangular panels is creating a book of mirrors, showing from multiple vantage points how fugitive and unstable the self actually is.

Are You My Mother? is an intensely introspective book, one that takes us deep into the maze-like corridors of Bechdel's mind. This concentrated inward look could have been suffocating had Bechdel not used the very form of comics to provide a counterbalance to her internal dialogue.

Pictures, staking their appeal to the eyes, are all about surfaces. Words, which are most potent when they come alive inside our mind, sound the depths of consciousness. By combining words and images so exquisitely, Bechdel is able to bring the internal drama of her mind to the surface, allowing us to share emotional concerns that run so deep they rarely get articulated.

Many of us have unfinished business with our parents, but few are as honest as Alison Bechdel. In speaking so well for herself, she becomes a voice for us all.

Jeet Heer is a writer based in Regina and Toronto. 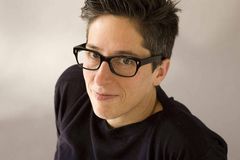