Leonard Cohen turned 78 last month, a milestone on life's odometer to which he probably paid little, if any, heed.

After all, as Sylvie Simmons astutely observes in her compulsively readable, exhaustively detailed biography of the Canadian singer-songwriter/poet/ladies' man, Cohen "always has been old." It's just that age now matches sensibility.

Lest we forget, his first studio recording, the dour, canonical Songs of Leonard Cohen, was released in late 1967, when to be young (i.e. under 30) was very heaven and Cohen was 33, the same age, reputedly, as Jesus was when He died and just four months older than Elvis. On its cover, there's a sepia-toned portrait of a sombre-looking, clean-shaven Cohen wearing a crisp white shirt under a suit jacket and what may be a tie. Garb, in other words, owing more to his upbringing as the scion of a wealthy high-end Montreal haberdasher than to the beads/bells/T-shirt aesthetic of the then-counterculture.

Forty-five years later, we have his latest (and 12th) studio recording, the aptly titled Old Ideas, and what's on the cover? Plus ça change: Cohen in shades, chapeau, shoes, suit and tie. "Darling," he informs Simmons, "I was born in a suit." And undoubtedly he will be buried in one.

Too old then to be a hippie and too young to be a charter member of the Beat generation, and it's somehow fitting to learn that Cohen's first band – one Catholic, one Protestant, one Jew – played neither rock nor jazz but square-dance tunes, country and western, under the moniker the Buckskin Boys. Cohen, of course, has always been the best kind of bohemian: his own. Indeed, he's more secure, comfortable and authoritative in that position than ever. Cool, collected, elegantly self-deprecating, the master of the effortless, often elliptical apothegm intoned almost invariably in a sepulchral baritone, he's at once the old man you wish your old man had been and the old man you hope you can become. Old and alive, in short, but no fogey.

That said, Simmons makes it clear that Cohen was very much a sixties (man)child. While no rock and roller, he most definitely rocked and rolled, consuming drugs, booze and women with the gusto, it seems, of someone almost 10 years his junior, someone like Mick Jagger.

Yet for all these indulgences, Cohen never failed to keep one eye cocked on the metaphysical, embracing more spiritual "practices" (including Scientology in 1969) than a Hermann Hesse character. His saving grace has been that it has all been done without any doofusness or loss of dignity, at least in the public realm. There was no shame in being a Leonard Cohen fan in 1972. There's no shame in being one 40 years later. That's why he'll always be a Leonard, never a Len or a Lenny – of this world but not entirely in it.

No doubt the adjective "definitive" will soon be affixed to I'm Your Man. But that's a term probably best reserved for one of the several biographies that surely will follow Cohen's death. Right now, the singer-songwriter/poet is too much "the artful dodger," elusive and reclusive, to be definitively pinned. Certainly I'm Your Man is the most comprehensive Cohen biography to date. More than three years in the writing, it contains the fruit of interviews with dozens of Cohen intimates and associates, plus a high degree of involvement from the artist himself (not least the loan of 16 photographs from his personal collection).

True, Simmons failed to get interviews with Joni Mitchell (Cohen's lover in 1966), Jennifer Warnes (whose superb 1987 album of Cohen covers, Famous Blue Raincoat,helped set the stage for Cohen's latter-day apotheosis) and Esther Cohen (at 87, Cohen's sister and only sibling). Also, in terms of literary interpretation and appreciation, Cohen is probably better served by Ira Nadel's path-breaking Various Positions: A Life of Leonard Cohen, from 1996.

But this is cavilling. For aspiring Cohenheads, I'm Your Man will be the go-to text for the next few years as it has all the key stuff – about the two Suzannes, life on the Greek island of Hydra, hanging with Irving Layton, freaking with Phil Spector during the 1977 recording of Death of a Ladies' Man, monking about with Sasaki Roshi on Mount Baldy, romancing Rebecca de Mornay, the triumph of Hallelujah.

For those already marinated in Cohen lore, there are, it's true, no big reveals, nothing about a secret marriage or additional siblings for son Adam and daughter Lorca; what it does have is just enough quirky tidbits to keep the pages turning: I'm still getting my head around Cohen telling his biographer about the time in 1967 he found himself in some unidentified New York club jamming with … Jimi Hendrix (!) on Suzanne (!).

While the British-born Simmons, whose credits include well-received biographies of Serge Gainsbourg and Johnny Cash, has an obvious affection for and rapport with her charismatic subject – she calls him "Leonard" throughout – the book is no hagiography. Yes, she acknowledges, Cohen often has been hobbled by depression, episodes of which she elucidates in often painful detail (admittedly, the episodes have gotten fewer and farther between in the past 12 years or so). But blessedly, these aren't offered as excuses for Cohen's sometimes jerkish behaviour toward women or the cavalier approach he once took to his business affairs or the tendency to head for the airport whenever whim would strike. It's part of Cohen's charm that he would, of course, be the first to confess the many holes in his holiness.

There's nothing experimental or eccentric about Simmons's writing or the way she structures it. She simply starts at the beginning (with a newly hatched Leonard being driven from the hospital to his Westmount home in a chauffeured limousine), then plows through the years until she and a suit-wearing Cohen find themselves, in mid-December, 2011, at Cohen's nondescript Los Angeles home, talking about this and that, including Cohen's intention to release a follow-up to Old Ideas. The book's only "arty" motif occurs every second chapter or so, when Simmons reproduces, in italics, a conversation she has with Cohen that's relevant to the chapter's proceedings.

That this chronological march rarely flags is a testimony to Simmons's way with words. The elevator in the Penn Terminal Hotel, one of Cohen's favourite New York dives in the late 1960s, is described as being "just big enough for a man and a corpse." Two of Cohen's favourite drugs (besides hashish, opium and acid), the sedative Mandrax and dexamphetamine, are "as handsome a pair of pharmaceuticals as any hard-working writer could wish to meet." Cohen's fondness for fedoras, sharp suits and shiny shoes makes him look like "a Rat Pack rabbi, God's chosen mobster," while "the gospels diverge," Simmons writes, "on just when and where Leonard decided to become a singer-songwriter."

Simmons never really offers or strives for a firm account of what makes Cohen tick, favouring instead intimations and suggestions. After reading her, a Freudian would probably declare the determining facts in Cohen's life to have been the death of his father, Nathan, when the artist was just 9, and the unqualified, if sometimes suffocating love of his mother, Masha. The last for Freud was "the most important condition for a man's success in life," while the first freed Cohen from the Oedipal conflicts he would inevitably have faced in his teens and 20s (i.e., "Son, when are you going to put down the guitar and start making some real money?").

Cohen himself, of course, has never made the drawing of such conclusions easy. He's a dancer, in life and in art, of what Simmons calls "the paradox of intimacy and distance" – a dance whose many twists and turns she captures so vividly on her blackened pages.

Globe and Mail arts writer James Adams once shared a bed with Leonard Cohen. ("We weren't lovers like that and besides it would still be all right.") 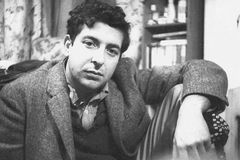 ‘Still wearing my cowboy pajamas’: Rock icons in their own words
October 26, 2012 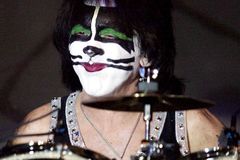 From Adele to Jagger: Six music bios and memoirs worth a look
October 26, 2012 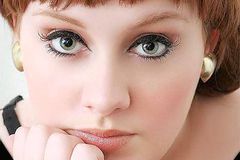