A: Wait. First we should clarify that this is not an interview with David Cronenberg.

A: Well, Cronenberg's work tends to have a schismatic quality, exploring splits between mind and body, reality and fantasy, etc. But often those schisms produce hybrids, e.g. Jeff Goldblum's "Brundlefly" in The Fly or the conflation of real and virtual worlds of eXistenZ. So writing this review as a dialogue is an attempt to reflect that.

A: God, no! Mainly I thought it might be a good way of coming to terms with a very strange, disturbing book. And the thing about Cronenberg is that, as an artist, he divides me too.

Q: What do you mean?

A: I'd find it difficult to claim that I like him as a filmmaker, yet I've seen pretty much everything he's done and find his stuff, for the most part, quite engaging – though often the engagement is with my own thoughts as much as with what's on screen, and occasionally those thoughts are: "Is this bad on purpose, or just bad?"

Q: See, I think those moments are intentional: suddenly you're thinking about watching the movie rather than just watching it, and voyeurism is a big theme for him, so implicating the viewer is probably what he's after. But enough about the movies. Aren't we supposed to be talking about the book?

A: This is all very relevant to Consumed, which seems to me in many ways a culmination of Cronenberg's cinema – and it began as a screenplay, anyway. TIFF's retrospective of his work was separated into three periods, from the early horror and science fiction stuff, through a middle phase of psycho-sexual weirdness, to his more recent films, which have operated in a more or less realist mode.

Q: And you think the novel touches on all of them?

A: It's got the surgical mutilations of Dead Ringers, the subcultural fetishisms of Crash, the brutality of A History of Violence, the flagrant capitalism of Cosmopolis. But before all that, the novel begins naturalistically, with a Skype conversation (Videodrome?) between a couple, a man and a woman, both photojournalists. There's a lot in this novel about photography. There's a lot about cameras, actually, and large swaths of it read like a Best Buy catalogue.

A: Between that and the proliferation of brand names, you'd think so  – I hope Apple paid out handsomely for the amount of product placement scored in the first chapter alone. Though I suppose the ubiquity of these companies, and how they moderate interpersonal relations, speaks to the book's title: "we are what we eat," I guess, in that consumerism has so fundamentally corporatized our identities.

A: Yeah. But that's not what's most compelling about this book, anyway.

A: It's really, really weird.

A: One of the motifs, for example, is cannibalism. Actually: self-cannibalism.

Q: How's the writing on a sentence level?

A:  The book struggles with certain things, definitely. Similes, for one: cigarette smoke drifts between characters "like the passing of an evanescent baton," as they converse "like experienced handball players." There's also this anxious (filmic) tendency to show us everything: a "quite neat, clean and modern little space" is adorned, exhaustively, with "sheer white curtains," a "substantial metal-clad door," a "sunflower-pattern bedspread" and "pink carpet."

A: Yeah, except there's a lot of telling, too, which becomes especially problematic around characters' interiority. Not only are feelings literalized – e.g., "Nathan was disturbed to find himself responding […] with a profound and hopeless sadness" – we're meant to believe that an emotion might occur simultaneously with its own meta-awareness. I mean, maybe the narrational omnivorousness is meant to speak to the title, too – though that feels like pushing it.

Q: But you said this stuff doesn't really matter, because the book's captivating anyway. What's the story about?

A: I'm still trying to wrap my head around it, to be honest. So you have the photojournalists, and one of them is writing/shooting a story about a controversial surgeon, and the other is writing/shooting a story about a ritualistic killing, and the two stories start to overlap. And then there are some undercover North Korean operatives, and a touch of creepy adultery, and a breast full of insects (maybe), and a weapons-grade hearing aid, and the book's kind of an international spy novel and kind of a treatise on capitalism and spectacle, though when it starts knocking bongos about "the insatiable, all-devouring Western consumerist ethos," my brain more or less scuzzes over. Generally the abundance of academic jargon (e.g., "the paradigm of the retroactive experience," photography's "inexorable manipulation of memory," the words "cavils" and "cathexis" in the same sentence) results in a tonal flatness.

Q: That sounds like the way his movies look and feel. Like, the acting's a little stiff, the look is almost bland, yet there's all this weird stuff going on. It creates tension!

A: I think of his movies as Robert Bresson directing an especially surreal episode of The Young and the Restless, in which, say, Victor Newman's penis explodes.

Q: Anyway. Is there bizarre sex?

Q: You're not going to quote those passages, are you?

A: Look up "apotemnophilia" if you really want an idea of what you're in for.

Q: But, despite all this, you liked the book?

A: Liked, no. I did find it riveting, though, particularly once it falls into a rhythm about halfway through and the plot starts to move in completely unexpected ways. And it kept me thinking the whole time I was reading, even if it was just feeling mad at myself for being engaged – even enjoying, in a way – all its brutal scenes of self-mutilation and torture.

A: Which, I think, is precisely the point.

Pasha Malla is the author of four books.

David Cronenberg's debut novel is unlike anything else you'll read this year
September 26, 2014 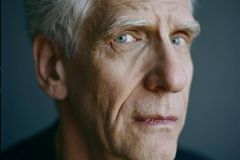