Any novel about a gifted musician must reckon with the love triangle that will eventually emerge. How can human love – messy, imperfect, bittersweet – compete with the pure and intense bond between musician and instrument?

This is the question Kim Echlin poses in her new novel Under the Visible Life. Mahsa and Katherine, jazz pianists born in the 1940s half a world apart, know that conflict well.

In Karachi, Pakistan, and in Hamilton, Ont., the piano seduces the girls long before any human lover does, and both become ecstatic in their devotion to it. All worldly concerns disappear when they lay their hands on the keys. "A musician's body is music, and the music takes on meaning only through the body's limbs, which bring it to life," wrote the French pianist Hélène Grimaud in her memoir Wild Harmonies. "She merges all in a boundless present, and at the supreme moment, she soars, enraptured: Beneath her fingers, the Earth slips away into the distance."

Under the Visible Life, Echlin's fourth novel and first since The Disappeared, which was a finalist for the Scotiabank Giller Prize, is a portrait of that "fanatical, unreasoning desire," as one character puts it. When 17-year-old Katherine and saxophonist T (Theodore) Minor perform together for the first time, there's a duelling carnality at play – the act of love embodied and an abstraction at the same time. Here is Katherine, remembering it: "T played desire drawn out to breathlessness, holding, holding, balancing along the wire's edge, until his eyes opened again and he breathed and brought the notes back to the beginning. I saw him look over at me, checking me out, and I was concentrating like crazy to keep up, and feeling what it felt like to be checked out by him on stage. Even when we were in front of an audience, I always felt as if we were alone together."

Musical gifts notwithstanding, Mahsa and Katherine are women of their time, and as they make their separate ways navigating the jazz scenes in Montreal and New York, they also contend with child-rearing, housekeeping and, eventually, elder care, while the men in their lives leave for their own solitary adventures. Both women chafe at, and are ensnared by, traditional gender roles, but nothing – not marriage, children, religion, poverty, nor racial tensions (both women are of mixed race) – can stop the music. These hurdles only radicalize them and they learn to improvise, both onstage and off. "I was not going to submit and be contained," Katherine tells us, as she rubs shoulders with jazz royalty in New York. "I wanted to be unholdable."

The two women meet, by chance, when they are both in their early 20s, and their lives become entwined like the two-piano jazz they eventually begin to write and perform together. Their performances serve as an apt analogue for the novel, which is told in alternating first-person episodes like companion melodies: Katherine, marooned with small children, blowing peas with a peashooter from her window; Mahsa, during her stultifying pre-wedding mehndi ceremony in Karachi, counting the hours until she can return to Montreal.

For a novel that otherwise captures the viscera of the musical life, there's a vexing soft focus on some of the real hardships in their lives. Echlin doesn't shield the reader, but neither does she deal more than glancingly with the effects of grinding material poverty on Katherine, alone in New York with three small children, or the devastating emotional poverty of Mahsa's loveless arranged marriage. The women's recollections of how they dealt with serious difficulties ring false at times. "I was not lonely with Coltrane and Tyner inside me," Katherine says, as she wipes up the raw egg mess her young daughter has made in the kitchen, groceries she can't afford to waste. We're left wondering who she's trying to convince.

Time has a way of sweetening the sourest notes, though, and this novel is a love song to music itself, the true and requited love of these gifted musicians' lives. Jazz is the constant lover, more present, even, than the women can be for each other, or than any person can be for either of them. Human jealousies and betrayals and failures, seen in this light, are really only caesuras; the music always begins again. The first time Mahsa stays with Katherine in her tiny New York apartment, she's smitten. "That was the night I knew how I wanted to live forever. With musicians. I would write songs too. I would stay up all night with strangers and listen to music and earn a living in music and I would feel the unfurling beauty of the world."

Christine Fischer Guy is the author of The Umbrella Mender.

Book Review
Cesar Aira’s The Musical Brain and Other Stories is an exhibition of intensely unbridled imagination
February 27, 2015 Book Review
Frog Music: A gripping whodunit about the death of a cross-dressing woman in 19th-century San Francisco
April 4, 2014 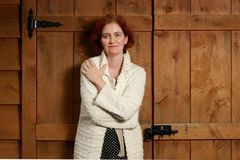