It is a truth universally acknowledged, among my long-married women friends, that a widower believes he is in need of a wife, and the happier his first marriage, the quicker he will seek a new spouse. An exception is the essayist and Booker Prize-winning novelist Julian Barnes. His new book – part essay, part fiction, part meditation – is an artful creation that soars into ecstasy, plunges into grief and records his attempts to find a semblance of equilibrium after the death of his wife, literary agent Pat Kavanagh.

"I was 32 when we met, 62 when she died," he writes. "The heart of my life; the life of my heart." The end came swiftly. "It was 37 days from diagnosis to death." Readers will learn very few other details about Barnes and Kavanagh as a couple: They lived in North London, they loved to go on walking holidays in Europe. Barnes doesn't tell us his wife was his agent, that their connection was professional as well as personal; they were childless so there is nobody to share his devastation; she left him in 1980 for a brief but grand passion with writer Jeannette Winterson; and she died from a malignant brain tumour. And that's fine, for this haunting book is a philosophical and literary exploration rather than a memoir.

Even before Kavanagh's death in October, 2008, Barnes, an atheist, was absorbed by death. In Nothing to Be Frightened Of (published that year), he meditated on the deaths of his parents, mortality and our squeamishness about dying. "I don't believe in God, but I miss him," he announces baldly – a statement that tersely and eloquently sums up the human dilemma for the non-religious as we hurtle toward the inevitable.

That book, however powerful, was written from an existential stance, when life with Pat exuded the promise of continuity, companionship and shared experience. Levels of Life, which is a triptych of metaphors, is composed from the inside by an uxorious man – an adjective he identifies with so closely that he repeats it several times – whose equipoise has been detonated by loss.

"Grief is a state while mourning is a process, yet they inevitably overlap," he writes. Suicide was such an attractive option that he contemplated the means: "I knew soon enough my preferred method – a hot bath, a glass of wine next to the taps, and an exceptionally sharp Japanese carving knife." Logic eventually turns him against that sweet and easeful death. "I realized that, insofar as she was alive at all, she was alive in my memory. … I could not kill myself because then I would also be killing her. She would die a second time, my lustrous memories of her fading as the bathwater turned red."

How then to live? He answers that rhetorical question the only way he can: "as she would have wanted me to." And that means writing through his grief. In 2011, he published The Sense of an Ending, a disturbing but lingering novella suffused with suicides, divorce, truncated careers and lives of diminishing promise. It won the Man Booker Prize and earned international plaudits and sales.

Levels of Life pursues many of the same themes – the nature of love, suicide as an escape when love dies – within three thoughtful and provocative essays: The Sin of Height, On the Level and The Loss of Depth.

"You put together two things that have not been put together before. And the world is changed," Barnes argues. The example he uses is ballooning and photography in intriguing vignettes about the aerial adventures of Sarah Bernhardt, the actress, Colonel Fred Burnaby, the soldier, and Felix Tournachon, the photographer better known as Nadar who took the first airborne photographs of the landscape beneath his balloon. The equation speaks to his union with Kavanagh, and indeed to any rapturous couple, whose attraction unites them in passion.

"But when we soar we can also crash," Barnes points out, reminding us that even to attempt flight is the height of arrogance, as Icarus proved in flying too close to the sun. To soar is also to pursue a passion and Barnes equates it with a fictionalized and doomed love affair between Bernhardt and Burnaby in the second essay, On The Level.

As he contends in the opening sentence of this section: "You put together two things that have not been put together before; and sometimes it works, sometimes it doesn't." Bernhardt, who has had many lovers before Burnaby, continues on her amorous path, while he, heartbroken, illicitly joins the expedition to reinforce General Gordon at Khartoum and is killed at the Battle of Abu Klea by one of the Mahdi's soldiers.

And that leads inevitably to the third section, The Loss of Depth, the most overtly personal section of the book. "You put together two people who have not been put together before," he writes, adding a few sentences later that "every love story is a potential grief story." And by plumbing that paradox, Barnes illuminates both the ecstasy of love and the despair of grief for his readers. I will leave it up to you to decide if he also navigates his own tentative path out of the wilderness of tortuous anguish.

Sandra Martin, a features writer for The Globe, is the author of Working the Dead Beat: 50 Lives That Changed Canada. 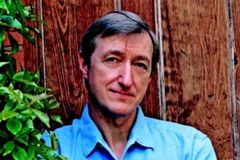