1. The chapter headings are song titles, prompting a download of corresponding soundtrack.

4. Use of "Bowie" as both proper noun and adjective.

5. An occasion to recall the must-have not-yet-ironic fashion accessory of my childhood: the Adidas two-tone shoulder bag.

Upon listening to the newest Florence and the Machine album, a friend remarked: "Can you imagine the impact of this record if we were 14 years old?" And it's true that hearing music in your teens is a transformative occurrence, and that moment is explored with humour and insight in Jian Ghomeshi's memoir 1982, a book that defies easy genre categorization by also acting as an editorialized history lesson of the popular musical trends of the time.

"The first time you really listen to an artist or band, you can intuitively sense what your relationship will be to their music for the rest of your life." For Ghomeshi, these musicians were David Bowie, The Talking Heads and even … yes … though it pains my own New Wave heart to admit it … Rush. (But girls have never loved Rush. You'll have to read the book to find out why. It prompted me to say out loud, "Well, that is a sexist assumption, but … one I totally agree with." Plus, it's about Rush, so who cares, etc.)

My favourite moments on Ghomeshi's popular CBC Radio morning program, Q, are when his trademark confidence and composure are transformed by the presence of an artist he admires, and the coolest kid on the Ceeb becomes audibly exuberant, fawning, verging on an adorable kind of embarrassing. Listen to him interview Kate Bush and you'll hear what I mean. Listen to the way he says the word "Radiohead," as though a thousand angels appear the moment the word leaves his lips. In those moments, one can imagine an adolescent kid grasping an autograph book, an Adidas bag full of carefully curated mixed tapes over his shoulder, just dying to unleash his encyclopedic knowledge of your entire musical backlist.

He may be one of the top Canadian cultural taste-makers, but he's still the ultimate fan. And while it may seem like a limiting choice to write a memoir entirely about one year in junior high, at the same time, this constraint makes sense given that the book also functions as a sort of love letter to New Wave and the music of 1982. To demonstrate this, the word "Bowie" appears no less than 234 times in the book. I'm kidding. I didn't count. But I wouldn't be surprised if the actual tally exceeded my guess.

Being 14 is always a remarkable thing for the person experiencing it. But if you're 14, and you're not, say, attacked by a bear, or kidnapped by a cult leader, does anyone really want to read about it? Luckily, 1982 has enough interesting elements beyond a kid obsessed with music. It's ultimately a triumphant outsider's story, about a skinny Iranian kid in Thornhill, Ont., trying to fit in as one of the only "brown" kids in the affluent suburb while the revolution rages in Iran. But pretty girls in the schoolyard ask him, "So, you're like, Arab, right?" Like most kids, he struggled with feeling like an imposter, but writes, "It's easier not to feel like a fake if you have a perfect nose and straight blond hair."

A telling anecdote is when he reflects on a friend, equally unpopular at the time, who will eat anything (a live guppy, a bag of dirt) for money. "I wouldn't do it for money, but I might do it to be liked. That would probably get me some attention and make me tough."

Despite his desperation to be liked, Ghomeshi bravely takes on his fear and embraces his dualities. At 14, he's a tenderhearted underdog having all of the experiences – singing in bands, conducting the morning announcements, performing in theatre productions – that would lead him to his incredible successes as an adult.

The writing style is bare-bones, and reads, unsurprisingly, like a radio monologue. It was difficult not to hear his trademark baritone in my head. His sentences are short and straight-ahead, using repetition to build momentum, and he switches seamlessly between present and past tense. He employs a few devices, including frequent lists that illustrate the points he is trying to make, some more effective than others. The narrative is infused with enough irony and self-deprecation that the earnestness doesn't wear thin. Most effective is the story of his one date with his dream girl Wendy, at the Police Picnic at the CNE. That single story is described in small detail, woven in and out of the chapters, so that we are still reading about it at the end, an effective editorial choice.

1982 is a funny, nostalgic and compelling read, especially for music nerds of a certain age. (Although most of us don't need a paragraph-long primer on the significance of The Clash, but I forgive.) It's also a nostalgic love letter to the 1980s, that turns the traditional Can-Lit immigrant's narrative on its head, while examining the meaning of cool, and the role music plays in who we become and who we love.

When Zoe Whittall sat near David Bowie at Lee's Palace in the mid-1990s, she couldn't think of anything to say, so she pretended to be too cool to care. 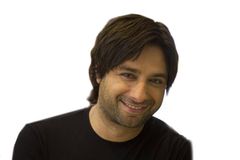