"It was hard to suppress her glee … at the magical return of her flawless breasts": Precious few serious novelists can get away with sincerely writing such lines, and absolutely no Nobel laureates save one. Across four decades and 11 novels, Toni Morrison has staked out a distinctive place for her emotionally and formally demanding work. She writes searing and lyric novels about the hopes, longings, disappointments and enduring strengths of black lives in modern America, more often than not poor women scarred by both private and national pasts, by things done to them and things they've done, to themselves and to others. The scope and scale of her accomplishment – most notably with novels such as Beloved, Sula and Jazz, and her brilliant meditation on race and American literature, Playing in the Dark – make her a singular successor to William Faulkner, a fellow Nobel laureate and American writer fixated on the nation's divisive racial legacies.

This all remains true in spite of her slim new book, which is less a Toni Morrison novel than an extrusion of familiar figures and features from earlier Morrison fiction – women and men haunted by pasts that keep pushing into the present, and pushing them apart from each other – if glazed with a contemporary sheen and ratcheted into melodramatic readability by stormy romance and a succession of ugly, graphic revelations, mostly about child molestation.

A beautiful and messed-up young woman who calls herself Bride occupies the unstable centre of the book. Born to light-skinned black parents, she is herself "midnight black, Sudanese black," even "so black, she scared me," as her mother Sweetness tells us in the novel's opening pages. Sweetness has no explanation for her daughter's dramatically dark colour, which breaks up her relationship to the father and leaves her a poor, single mother who raises the little girl, originally called Lula Ann, at literal arm's length: Whether embittered by the child's unintended effect upon her accusing, absconding father, or ashamed to be associated with a child so much dramatically blacker than herself, she won't even let Lula Ann call her mother. "Her colour is a cross she will always carry," declares Sweetness. She's wrong. The cross really proves to be Sweetness herself and the love she denies Lula Ann from the very start of her life, which has dramatic and awful effects on Lula Ann and many others.

In true Morrison form, these effects are profoundly felt before they're fully understood. Lula Ann grows up and reinvents herself as Bride, a swish California cosmetics executive who drives a Jaguar, wears fashion and – armed with confidence and beauty – enjoys attention from any man she pleases, whether at high-end bars or in her bedroom. Everything is not as fine as it seems, however: We learn as much when with quiet desperation Bride seeks out a paroled child molester, attempts to give the hardened and skeptical woman some cosmetics and a plane ticket and money, and is beaten up for her efforts. The nature of their connection becomes clearer as the novel develops, just as Bride becomes joyfully involved with a cerebral, hot, young guy named Booker, whose own brother, we learn, was sexually abused and then murdered by a serial pedophile who collected the cut-off penises of murdered little boys in a box in his basement. (Morrison's accompanying descriptions made me long for the comparatively restrained depictions of violence against children in Cormac McCarthy's novels.) When Booker finds out that Bride tried to offer charity to another molester, he leaves her right away, and in turn she gives chase, crashing her car, then living for six weeks with kindly, poor, white farmers in rural California who have themselves adopted Raisin, a little girl whose mother pimped her out as a child prostitute.

As with much of the dialogue and events in this novel, these could be put to better use in a Key and Peele sketch, perhaps in a satire of a Lifetime TV-movie adaptation of a truly great Toni Morrison novel. Likewise, Morrison's attempts to encase this new novel in contemporary terms – with passing references to Diet Coke and cellphones and "the bomb" and the "television/Internet world" of today – are hard to read as little more than an old person's flailing attempt to seem current.

To be sure, there is one remarkable, shocking, wrecking revelation in God Help the Child, regarding why Bride did a very important, very brave, very wrong thing as a little girl. This exposure radically readjusts your sense of her and her relationships, her motives, her entire world. More, it will surely break your heart and, in spite of the rest of the book, remind you of just why Toni Morrison has long been regarded as one of America's greatest novelists.

Novelist Randy Boyagoda is a professor of American studies at Ryerson University. His new book is Richard John Neuhaus: A Life in the Public Square. 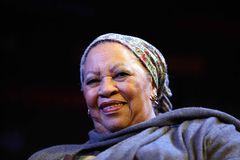