Why do people cry at weddings?

Is it the organ music? The gentleness? The grandparents?

I've pondered this from many church pews, mine the only dry eyes in the room. Love is a grand thing to behold, but love needn't wear a lavish taffeta gown to be observed. I've teared up over Morrissey records, seen couples screaming at each other drunk in the street at 2 a.m. and thought, "This is beautiful; this is real love."

At weddings, I'd sooner yelp over the blisters quietly forming inside the heels I bought the day before.

This is what separates me from "the vast majority," a phrase employed by Neith Boyce, the writer who penned Vogue's Bachelor Girl column in 1898, to mean those who regard marriage as society's most honourable tradition. Having just finished the vitalizing, all-embracing new book Spinster: Making a Life of One's Own, by Kate Bolick (whom you might remember from The Atlantic's 2011 "All the Single Ladies" cover story), I can say it now: Perhaps I am a spinster. I mean this in a nice way.

In 2006, the term "singlism" was coined by social scientist Bella DePaulo to mean "the stereotyping, stigmatizing and discrimination against people who are single." Spinster, though it spends 300 pages level-headedly explaining, with the help of historical context and centuries of information, why living alone is not unnatural, goes much deeper than simply defending the choice to be unmarried. (The writer Fannie Hurst said nine out of 10 marriages were "sordid endurance tests overgrown with the fungi of familiarity and contempt.")

Bolick encourages a reclamation of the word "spinster" – a re-examination of why "in spite of her prevalence, the single woman is nearly always considered an anomaly." She suggests that we recontextualize the Eleanor Rigbys we've come to pity, revisit what we think we know about why women marry and contemplate that "marriage material" might be a degrading thing to say.

"Spinster" could be "shorthand for holding on to that in you which is independent and self-sufficient, whether you're single or coupled … ," she writes. "Code for remembering to take time for yourself."

Bolick recounts a night back when she, then newly single, had just moved into a new apartment. "I stayed at a party until 4 o'clock in the morning, and when I got off the 6 train at 28th Street an eerily empty yet still-open McDonald's beckoned like an urban mirage. Back on the sidewalk I threw away the bag, peeled off the warm paper wrapping, and bit into the most delicious Big Mac I'd ever eaten. … Waiting for me at home was nothing but an empty bed into which I'd crawl naked and drunk and stinking of fast food, disgusting nobody but myself."

Earlier, Bolick describes a summer spent living away from her boyfriend at the time. "Most extraordinary was waking alone, into my own thoughts. I'd re-plump the pillows and stretch my legs until my body spanned the entire mattress, and I'd lie suspended in that gauzy dreamscape between sleep and real life as long as it lasted." An empty bed in which to sprawl, sans the pressure to wake up and make someone else's scrambled eggs: the spinster's oasis.

Shouldn't it take more judiciousness to relinquish this freedom of the soul? "Living alone forces people to figure out how to manage their emotional needs," writes Bolick. But solitude, like rent, is not cheap.

Economics factor muchly into Spinster's catechization of independence. "I began to understand the appeal of marriage: mutual support, splitting bills." It's understandable why many, my own (still together, for what it's worth) parents included, move in together after six months of dating – the same amount of time, Bolick says, one can remain on their best behaviour. Comforting as it is to have someone share the chores and say, "I love you" 12 times a day, this also leads to people marrying before they've turned into what they are. I was 20, a different girl entirely, when the first of my friends got married. I can't help but wonder how the women I've watched – dry-eyed – become young wives might have changed given the chance.

"It's amazing, really, how deftly we hold in our collective consciousness this disconnect between what we want marriage to be and how so many marriages actually turn out," writes Bolick. Half of marriages will end in divorce. Now divorce – getting out of a bad deal – that, I'd cry tears of joy and toss some rice over.

"The fantasy of certainty" is a tempting one, I understand, and of course there are matches made in heaven, marriages that last happily and functionally for decades. Still, Bolick asks, "Why must women always be leaving marriages to find what they want? Why couldn't they find what they want first?" That the answer is the sound of a biological clock ticking doesn't help.

"The loner is romanticized as a rebel, as long as he's a he," writes Bolick.

If being a spinster means keeping a part of oneself that is no one else's, regardless of romantic status, a kind of intuitional, instinctual self-care to nurture one's vivacity and reap one's independence, let my life be a loom of my own.

Carly Lewis is a Toronto-based writer whose work has appeared in Vice, The Walrus and The Guardian. 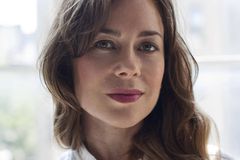