John Vaillant writes powerful prose. His first two books – The Golden Spruce and The Tiger – tackled social and environmental issues with a deep empathy and breadth of knowledge that captivated readers and won him much acclaim. As a fellow Vancouverite, I can tell you Vaillant also walks the walk; he was out on Burnaby Mountain in late November protesting the Trans Mountain pipeline. As a matter of fact, when I was introduced to his work, I misread his name as Valiant and thought: Well, that's appropriate. His work is fearless and full of heart.

The Golden Spruce and The Tiger are both true stories, and when creating a work of non-fiction the writer's challenge lies in the curation of images and events to present a clear, compelling version of reality. Facts shouldn't be altered for the sake of narrative. On the other hand, the fiction writer finds himself with seemingly endless narrative possibilities. And, although the danger faced by Mexican workers crossing the American border is all too real, The Jaguar's Children is a work of fiction. Vaillant's writing is characteristically fearless in his first novel, but with varying degrees of success.

After a botched attempt to sneak across the border, Hector is left sealed inside a water truck along with 14 other migrants. His friend, Cesar, is knocked unconscious. Thus, Hector's story is delivered entirely through voice files he saves on Cesar's cellphone, in hope of sending them all to AnniMac – Cesar's only American contact – when and if reception improves. Yowza. It's a special kind of purgatory Vaillant creates for readers. Darkness, crushing claustrophobia, and a complete reliance on characters who either don't know or don't care about Hector's plight. I suspected from the very beginning that Hector was doomed, and I was forced to negotiate just enough hope to follow the story to its conclusion.

"If you are my witness, AnniMac, I am your invisible man. I am saying all this because I cannot see or do anything else."

While I was open to the idea of Hector's recording his life story for posterity, this construction wore on me as pages turned into chapters. An expansive storyteller with a strong grasp of narrative and imagery, Hector spares no details filling me in on all the characters I don't get to meet. Even Cesar's story, which he isn't able to tell himself because he is unconscious, is related by Hector in painstaking detail, especially for someone who is weak and starving, struggling for adequate air and water.

And what about the other people in the water truck, Hector's fellow travellers? Maybe it's tangential for me to wonder about these characters, since they're not the stars of the show. But the novel opens with them, and I couldn't stop thinking about how a bunch of ill-fated people trapped in a water truck would relate to each other. Naldo, the Mixtec kid who uses up his cellphone battery reading text messages from his girlfriend. The praying woman. The immediacy of their situation begged for my attention, while the lack of immediacy inherent in flashback storytelling challenged me. The tantalizing flashes of humanity: The baby-faced man, the baker from Michoacan, who, except for a few brief interactions, faces the prospect of imminent death with little more than quiet, dignified acceptance. Well, I was curious about that, curious about the untapped possibilities.

The Jaguar's Children also contains some political intrigue. You see, Cesar is a scientist who has been working with GMOs. At one point, the novel becomes a political thriller, starring Cesar as The Man Who Knew Too Much, being tossed into big cars and driven to abandoned buildings and forced to listen to clichés delivered by fat, grinning, powerful men. Cesar's forced immolation of a print version of his "data" was laughably anachronistic in an era of computers and cellphones. Symbolic, I get it. But all this theatricality confused me. In an atmosphere of such desperation, such impossibly high stakes, why not just eliminate a whistle blower? Was the investment the government made in Cesar really so indispensable? I don't know, and I can't say for sure because as a reader I don't get to spend much time with Cesar. He's distant by design, despite his vital role in the story.

Vaillant's narrative choices are risky, but they're not ill-informed or poorly executed. In The Jaguar's Children, the action is always happening elsewhere. Appropriate, considering how the American dream is sold to potential immigrants. Hector is alone, so devastatingly alone, and this reality becomes more poignant each time we are pulled out of one of his richly detailed stories and returned to the water truck. His reality becomes our nightmare. But even the most adept fiction writers have to work a little harder to root a scenario in the reader's imagination, or we're left wondering what we're missing.

Carleigh Baker is a writer who lives in Vancouver.

I hereby resolve...Authors share their writerly resolutions for 2015
January 2, 2015 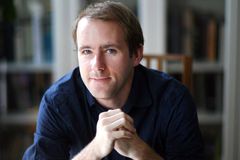