Some years after the death of King Arthur, Britons and Saxons live side-by-side in an uneasy truce, ogres roam the English countryside, dragons lurk in the mountains, and the land still bears the marks of Merlin's magic. This is the setting for Kazuo Ishiguro's long-awaited sixth novel. It's a new milieu for the acclaimed author of The Remains of the Day, but The Buried Giant offers the same profundity and lyrical prowess as his most celebrated books.

The story follows Axl and Beatrice, a married couple who live in a peasant village. Because they are old and slow, they are mocked by local children and exiled to the least desirable lodgings. The social landscape is rife with superstition and suspicion; at any moment, it seems, a full-blown witch hunt might erupt. The villagers' fears are not entirely unfounded: Dark supernatural forces do exist in this version of England, and they do imperil mortals – particularly in one horrifying scene in which a swarm of river pixies attack the protagonists.

For a long time, Axl and Beatrice have intended to visit their grown son, who lives a substantial voyage away. But they keep forgetting this plan – in fact, they forget a lot of things. Everyone in their village does. Lately, the region has been beset by a pervasive mist that seems to addle human memory. A crisis that arouses panic in the village one night is barely remembered the next.

Even a long-married couple like Axl and Beatrice can't be quite sure what kind of life they've led together. All they know is that their mutual affection has survived these many years. If the mist were to be driven back, surely a trove of joyful conjugal memories would resurface. Beatrice describes their marriage as "like a tale with a happy end, when even a child knows not to fear the twists and turns before." Clearly she hasn't read Ishiguro's previous work; if she had, she might not be so keen for self-epiphany.

Like Ishiguro's last two novels, The Buried Giant embraces some of the trappings of a specific genre – fantasy, in this case, after forays into science fiction (Never Let Me Go) and the detective story (When We Were Orphans) – but subverts the genre, using it as a vehicle for the author's own distinctive vision. More specifically, it draws on chivalric Romance literature and Arthurian legend. But even if it does feature a dragon and knights errant, this is no swashbuckling romp. Sir Gawain, one of the Knights of the Round Table, is a central character, and even takes over as narrator for some stretches. No longer the glittering young hero of Sir Gawain and the Green Knight, he is now a weary old man clinging to the last vestiges of his heroic vocation. "His armour was frayed and rusted … his tunic, once white, showed repeated mending." The knight's trusty steed is now an "old battlehorse … legs bowed, back sunk."

Through this chivalric lens, Ishiguro continues his lifelong literary examination of English-ness. It could be argued that his stories – particularly the mesmeric, dreamlike The Unconsoled, set somewhere on continental Europe – do not really take place in their ostensible settings; if anything, the peculiar, disconcerting atmosphere that pervades his books is a sort of place unto itself. Nonetheless, certain elements of English and Japanese culture do seem essential to the fabric of his work.

Born in Japan, Ishiguro was brought to England as a young child when his oceanographer father arrived for a research project. It would be another 10 years before the family decided to stay there permanently, so young Kazuo was raised as if he might someday return to Japan – relatives sent him Japanese educational materials, and he devoured samurai stories. It wasn't until after his inclusion on Granta's 1983 "Best of Young British Novelists" roster that Ishiguro became a British citizen. The sort of cultural limbo in which he spent much of his life seems to have spurred an outsider's fascination with both England and Japan. (His first novel, A Pale View of Hills, most explicitly bridges the two; its protagonist is a Japanese woman who resides in England.) Traditionally, the two island cultures share some significant characteristics, including a highly codified etiquette, an aversion to certain types of emotional expression and a zest for imperial expansion – all of which serve important roles in Ishiguro's fiction.

In the case of The Buried Giant, Ishiguro takes us back to a proto-England. Anglo-Saxons are on the cusp of taking over the country – in other words, England proper is about to be born. And it will be a bloody birth, as Saxons avenge past wrongs and wipe out the Britons altogether. From the book's very first sentences, it's established that we are not in a friendly pastoral landscape of self-congratulatory myth: "You would have searched a long time for the sort of winding lane or tranquil meadow for which England later became celebrated. There were instead miles of desolate, uncultivated land."

As the story progresses, Ishiguro further undercuts chivalric motifs. Gory fights are preceded by excessively courteous banter. Knights with good intentions end up implicated in atrocities, using unconscionable means to achieve supposedly noble ends. This portrayal of misguided naïveté is vintage Ishiguro, reminiscent of the butler in The Remains of the Day, faithfully serving a master with Nazi sympathies, or the Japanese painter in An Artist of the Floating World, who applies his talents to imperial propaganda. There may be a glimmer of autobiography in this arc; in interviews, Ishiguro has spoken about reconsidering the political certainties of his youth after his 1970s idealism soured into disillusionment in the 1980s.

When finally Axl and Beatrice set off to find their son, the journey leads them along haunted waterways, into subterranean Roman ruins, up mountain ranges and through a monastery where the monks have developed a particularly gruesome method of mortifying their flesh. Ishiguro revels in these settings and the descriptive opportunities they provide. As in all his fiction, the careful, precise prose gathers force as it accrues, and the judicious use of detail builds a rich, enchanting world, even as its geography shifts and baffles.

Eventually the quest takes on an additional goal: to identify and destroy the source of the memory-depleting mist. Different characters have different reasons to do so. Whereas Axl and Beatrice hope to revive memories of their life together, a young Saxon warrior has political motivations for dispelling the fog and awakening memory on a much larger scale. Here, Ishiguro taps into one of the great recurring themes of his work: the role of national or cultural memory and its influence on individual lives. Forgetfulness helps a society live with its past sins and forgive the sins inflicted upon it; when that fog is dispelled, the consequences may be cataclysmic. Memory keeps grudges burning. In love and in war, it can act as a fatal toxin: Be careful, the novel warns, what you choose to remember – and what buried giants you set out to unearth.

The story intensifies as it nears the climax and as these ideas come into sharper relief; the concluding scenes are very powerful. But Axl and Beatrice's journey does take a while to hit its stride; even readers accustomed to the Ishiguro pace may find the early scenes slow. The quasi-archaic turns of phrase take a bit of getting used to, and some aspects of the dialogue can be mildly cloying, including Axl's incessant use of "princess," his pet name for Beatrice. But these early distractions are minor and well worth enduring. Once its spell takes hold, The Buried Giant is vivid, tense, thoughtful and moving – and entirely worthy of Ishiguro's formidable oeuvre.

Peter Norman is the author of a novel, Emberton, as well as three collections of poetry, the most recent of which, The Gun That Starts the Race, will be published in May.

Salman Rushdie on Kazuo Ishiguro: His legendary novel The Remains of the Day resurges
August 15, 2014 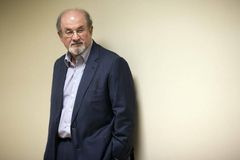