What Love Is: And What It Could Be

American Hookup: The New Culture of Sex on Campus

"A woman alone is spat on," says Simone de Beauvoir's The Woman Destroyed, a book written in 1967, as the narrator cascades into madness because the men in her life have left her. How I wish that forlorn spirit (a fictional character, but real enough) could see 2017 – Single Ladies on the radio (and in 2011, the cover of The Atlantic), Tinder dates, no wave-polyamory, food-delivery apps that render personal kitchen appliances useless, the reclamation of embroidery.

We've reached a point, in contemporary urban society, at least, where singlehood is fine, and so is being in a relationship, and so is compartmentalizing the whole idea of romance until one has finished doing other things. Even happily married people have come to realize that love may not be magical and have largely stopped hoisting the fable of easy love upon the world.

A new crop of books, released conveniently in time for Valentine's Day, encourage us to question whether the sentiment of love might be less important to relationships than utilities such as reproduction, personal safety, a double income, chores, lifestyle preference or simply a quest to battle boredom. There is also the question of the point of love at all.

In Carrie Jenkins's What Love Is, the author, a professor of philosophy at the University of British Columbia, asks, "Which of love's features belong to its social nature, and which belong to biology?" Knowing this, Jenkins says, "is essential for understanding what kinds of control we have over the nature of love and what love could become in the future."

The very suggestion love might be administrable is striking. An upcoming memoir by Mandy Len Catron, called How To Fall in Love with Anyone, continues an exploration that began with her 2015 New York Times piece about a psychologist, Arthur Aron, who concluded people could be drawn together by answering to each other a set of 36 specific, increasingly personal questions. (A pair of Aron's participants ended up getting married.) "I first read about the study when I was in the midst of a breakup," Catron wrote. "Each time I thought of leaving, my heart overruled my brain. I felt stuck. So, like a good academic, I turned to science, hoping there was a way to love smarter." It would seem that there is.

The ticket, however, is being genuinely honest with oneself, a nearly impossible task that requires intention and mercilessness. "Any kind of 'love' that would not survive a long, close look may not be such a wonderful thing to have in your life after all," Jenkins writes. "Illusions are unstable things that can crumble for all sorts of reasons and without warning, even if you studiously avoid looking at them."

Jenkins gets at something I think we all know deep inside but heavily resist, especially when in a relationship. It's easier to be reasonable about love when you're out of it.

"The questions reminded me of the infamous boiling frog experiment in which the frog doesn't feel the water getting hotter until it's too late," Catron wrote, of conducting her own version of Aron's study on a date, with an acquaintance she'd had since university. (From that night on, they were a couple.) "With us, because the level of vulnerability increased gradually, I didn't notice we had entered intimate territory until we were already there, a process that can typically take weeks or months."

In the 1970 book The Dialetic of Sex, Shulamith Firestone wrote that romanticism was "a cultural tool of male power to keep women from knowing their condition." The same has been said of monogamy itself, and to this list I'll add the sort of chic pseudo-polyamory that conflates dishonest promiscuity with ethical non-monogamy and seems to propagate my peer group. "With love and with women, there is cultural potency to the idea that mysteriousness is part of what is special about them," Jenkins writes.

I am reminded of the Nick Cave and the Bad Seeds line, "To possess her is therefore not to desire her." I am also reminded of my mother advising me, circa age 10, to never let a partner love me less than I love them, wisdom I found a little premature to offer a child at the time, but now understand.

"Repeatedly, we're disappointed, and we're starting to find that holding out for a long-term love is often not a pragmatic choice," Sarah Ratchford wrote recently for Flare magazine. "We no longer expect (or need) those arrangements to last forever. So we're deprioritizing love, relegating men to utilitarian side dish and investing in our friends instead." While it's worth noting friends, too, can break your heart, Ratchford and Jenkins both push for a wholesale remodelling of what a heart is for. ("It's astounding, really, to hear what someone admires in you. I don't know why we don't go around thoughtfully complimenting one another all the time," Catron wrote in the Times. But this is what friends do, if you stack your team correctly.)

In the new book American Hookup: The New Culture of Sex on Campus, author Lisa Wade puts forward some necessary caveats regarding the current cultural recalibration of love. One in three students surveyed by Wade cite an experience of trauma in their intimate relationships. In some cases, the resistance of intimacy is predicated on understandable fear, sexual-assault statistics being as high as they are. Simply put: dating, especially within heterosexuality, is dangerous. That said, 28 per cent of women sourced by Wade also said that "romantic love brainwashes women."

"Hookups are described by women as sexual liberation itself, but also as a way to protect their ambitious trajectories," Wade writes. "As recently as the 1980s, college women were 'mobbed by romance,' prompted at every turn to find a career-minded boyfriend so that they could quickly get engaged, settle down, and start a family. Schoolwork took a back seat to steady boyfriends, leading women to revise their career ambitions in favour of planning to be a supportive wife. Young women today resist this path."

So where does that leave us, if not married with children, and if not soaring around the city reapplying saucily titled lipstick (Heat Wave, Brave Red!) in the cab en route from one Tinder match to another? For now, figuring it out.

"Hookup culture also carries with it some of the worst things about the last hundred years. It is still gripped, for example, by the limiting gender stereotypes that emerged during the Industrial Revolution, that fissuring of love and sex that left us thinking that women's hearts are weak and men's hearts are hard, that men's desires are ablaze and women's barely flicker," Wade writes. "…When women of colour are sexual, it's seen as a racial trait; when poor and working-class women are sexual, it's read as 'trashy'; and when middle-class white women are sexual, it's interpreted, all too often, as just a proxy for relational yearning. And, since hookup culture demands that students seem uninterested in romance lest they seem desperate, this stereotype ensures that women usually lose the competition of who can care less, if only by default." (My mother was onto something.)

"No pill will cure the problems we have built into love's social role, but we may be able to manipulate the biology of love more wisely once we appreciate this," Jenkins says.

In the meantime, then, I'll defer once more to de Beauvoir: "I want to live for myself a little, after all this time … I have plans by the dozens in my mind."

Carly Lewis is a Toronto-based writer who regularly contributes

to The Globe and Mail. 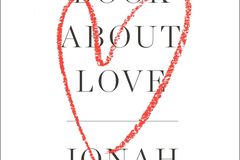 In new book, cartoonist Chester Brown goes biblical to justify sex work
April 8, 2016
Follow us on Twitter @globeandmail Opens in a new window
Report an error Editorial code of conduct
Due to technical reasons, we have temporarily removed commenting from our articles. We hope to have this fixed soon. Thank you for your patience. If you are looking to give feedback on our new site, please send it along to feedback@globeandmail.com. If you want to write a letter to the editor, please forward to letters@globeandmail.com.
Comments