It's a generally – though not universally – accepted rule of thumb that a book should hook readers on the first page. The Mountain Story takes this desire to hook the reader one step further, by the jacket itself, which teases "Five Days. Four Lost Hikers. Three Survivors." The terseness of the tease, the descending numbers, are almost irresistible: Something terrible is going to happen within. The question of just what, and how terrible, will drive the prospective reader into the book.

The Mountain Story is powerful storytelling, crafted out of keenly paced narrative and a building suspense. That's something of a departure for Lori Lansens, a writer better known for intimate storytelling, for emotional acuity, than for life-or-death struggles. That's not the only departure for Lansens: The Mountain Story is her first novel to be told from a male point of view, that of a teenage boy, less "hero" than "protagonist," but capable, it turns out, of his own brand of heroism.

The novel begins with that boy, Wolf Truly, taking the tram up the side of a mountain that dominates the skyline above Palm Springs, Calif., "from the Desert Station – the climate of Mexico – to the Mountain Station – the climate of Canada – in less than 20 minutes. Palms to pines." Although he is experienced as a hiker, he leaves behind his backpack, its vital food, water and extra clothing: His goal on the mountain isn't to hike, but to leap to his death. It's his 18th birthday, the first anniversary of the accident that claimed his best friend Byrd, and days after his father – a drinker, gambler, drug dealer, among other things – killed two people drinking and driving: Wolf has little reason to live.

On the mountain, though, he meets three women – Nola, Bridget and Vonn – stumbling through the wilderness, obviously unprepared for the wild. Despite his attempts to help guide them, his desire to ensure their safety, the group ends up lost on the mountain, struggling for their lives as the temperatures fall, as their water runs out, as infections in wounds start to spread.

It's a harrowing story, and one that Lansens handles with a seeming effortlessness. Everything – from the landscape, to the slow degeneration from thirst and hunger, to the ravages of the environment – rings true. The book never feels researched; it feels inhabited, experienced. Nowhere is this more apparent than in the characters themselves. Wolf is beautifully drawn, realistic and convincing, true in both his strengths and his flaws. The female characters (yes, I'm being deliberately coy) reveal themselves slowly through Wolf's eyes, building and developing over time.

That development of character is the key to the novel's success. Yes, The Mountain Story is a departure for Lansens – a survival story with a male protagonist – but at its heart, it exhibits precisely the emotional acuity, the intimate storytelling, we have come to expect from her fiction. As time passes on the mountain, the novel uses flashbacks and recounted stories to show how Wolf came to be planning his death on that fateful day, from the early loss of his mother to his hellish life in the squalid shadows of Palm Springs. While the novel fulfills the promise of the tease on the cover, it also answers the questions the reader wasn't fully aware they even had: What happened to Byrd on the mountain the year before? Why has this event driven Wolf to suicide?

The Mountain Story is a feat of storytelling, sure to be one of the most memorable novels of the year, a skilled balance of thriller and domestic drama, of family secrets and struggle for survival. By its closing pages, it gains an almost devastating emotional force that accompanies the irresistible quality of its narrative drive: It's a master class in fiction and its potential.

Lori Lansens on why she wrote her new novel, the books she reads again and again and more
April 17, 2015 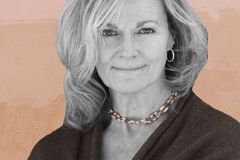