Dionne Brand inhabits Toronto from the inside out. The city's third poet laureate (2009–2012), Brand does not share the view of its founders; not for her the puritanical uprightness of the Protestant United Empire Loyalists who overran the region in the wake of the American Revolution, nor the stuffiness of "Toronto the Good," as it came to be known in the 19th and 20th centuries. Brand's Toronto is almost aggressively postmodern – a sensuous, seething metropolis where cultures and ethnicities rub shoulders and coexist in a kind of beautiful tension.

The juxtaposition in that apparently oxymoronic phrase is evident throughout Brand's brief new novel, the very title of which nods in the direction of limits, of boundaries enclosing something that wants desperately to free itself of its shackles. The city as Brand conceives it is precisely this kind of roiling mass, pushing at its edges and struggling to contain the vibrant, often violent life within it.

Brand's Toronto is a place of contradiction: the Don Valley Parkway is "a sticky bituminous river" with cars that resemble "mechanical violet silverfish" constantly "boring down" its length. Lake Ontario "oscillates like green-blue wet glass," while Dundas Street houses artists and young people in tiny apartments with "cracked ceilings … cracked linoleum … [and] peeling paint in the hallway."

The opening image in the novel features the conflation of beauty and grimness: Dupont Street at sunset, a street that is "so ugly; car-wrecking shops, taxi-dispatch sheds, rooming houses, hardware stores, desolate all-night diners and front yards eaten up by a hundred winters' salt." And yet the sunset manages to infuse this debased landscape with "subtlety" and "otherworldliness." Significantly, however, the sunset is being viewed through a car's rear-view mirror: in Brand's conception, beauty cannot be gazed upon directly.

The novel's characters are similarly contradictory. As befits a city of contiguous, multicultural neighbourhoods, Brand has crafted a polyphonic narrative, told from the shifting perspectives of a diverse cast. June is a social worker struggling to negotiate her relationship with her lover, Sydney. One of the young people June tends to at the drop-in centre where she works is Bedri, who has "thugged out" during a carjacking with his friend Ghost, severely beating the vehicle's driver. Bedri's father, Dau'ud, drives a cab through the city's nighttime streets, and Ghost's mother is an addict who frequently abandoned her son and his sister, Lia, to foster homes when they were children.

Each of these characters strives to reckon with the limits of love and a person's responsibility for others. June tries to gain perspective on her relationship with Sydney by placing her current situation within the spectrum of her fraught romantic history. Dau'ud, a Somali economist who speaks five languages, is incapable of passing along his ideals and work ethic to his increasingly delinquent son. And Lia is consumed with anger at the cycle of insufficient caring she sees handed down among the women in her family.

The inner turmoil of Brand's characters maps their city's crisis of identity – beauty and pain constantly battling for ascendancy – yet the author's decision to make her novel so short means that some of her cast is allowed only glancing consideration. Specifically, Dau'ud, one of the novel's most interesting characters, is not given much room to breathe; we see the city as he does, through the windows of his cab, but we never gain access to him as a fully developed person.

Brand's sensibility is, unsurprisingly, highly poetic, which lends her prose a certain gnomic quality. "Beauty is not weight," she writes. "That is why it doesn't stay long, that is why it doesn't damage." Or, at another point, "She had forgotten, of course, that when you are not in a position to order your life, disorder has its own order. Which is not like the disorder of order but like the order of disorder." Moments like this feel forced and artificial, grasping for a profundity that remains stubbornly just out of reach.

More effective are the scenes that unfold in a relatively unadorned manner: Dau'ud witnessing a female passenger meeting a threatening figure in a parking lot for a nighttime assignation; June and Sydney arguing about the relative empathy that should be afforded "a little thug" like Bedri; Bedri's appeal to his hairdresser sister for money, and the sister's coruscating reaction. These scenes, in which the author is most restrained, contain the greatest emotional impact.

One of the stumbling blocks between June and Sydney involves the former's dislike of birthday celebrations. In lieu of expensive gifts, June asks her lover for one embrace each day, and one kindness each week. "But an embrace each day and a kindness each week can be very difficult. Nothing simple about it." Of course, Sydney proves incapable of following through on this regimen. There is a lesson here: often the most apparently simple things can be the most deeply affecting. And the most difficult to pull off.

Watching Toronto in the rear-view mirror in Love Enough
October 5, 2014 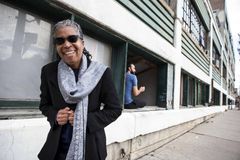