Auntie Poldi and the Sicilian Lions

Where better to escape a Canadian February than Sicily – a land of lemons, almonds and crime. This debut novel by Mario Giordano is funny, smart and, above all, atmospheric. Auntie Poldi is recently widowed, deeply depressed and has decided to drink herself to death. She moves to Sicily so she'll have sea air for The End. But, taking a walk on the beach, she discovers the corpse of a young man, victim of a sawed-off shotgun blast. Who is it? Well, there's no face left. After Aunti Poldi becomes a suspect, she falls hard for the very delectable Commissario Montana, which helps deaden the pain of her recent loss. This light and frothy book offers a slick puzzle along with information on Sicilian treats, from pistachios to pasta. Incidentally, the Mafia is apparently non-existent – "a creation of the fascists in the North." Enjoy!

The Death of Kings

Those of us who first met John Madden, five books and 20 years ago, know Rennie Airth will not disappoint. In the latest, as Madden (now retired) comes down to Kent to investigate a long-settled death-penalty case, we are enraptured from the first page. We're back in Britain. The year is 1938 – that last glorious summer. Portia Blake is a woman on a mission, but just what that mission is is unclear. She wears a jade Buddha around her neck. She's very careful and very frightened. As she walks along the corridors of a great country house and out into the garden, she passes a maid, then some hop-pickers rambling home from the pub. Fast forward many years: A man has been arrested, confessed and hung for the murder of Portia Blake, but then the Buddha turns up in an anonymous letter. Did the authorities move too quickly to convict? Did they ignore the gentry and focus on the hop-pickers? Madden is tasked with finding an answer. As always, Airth is a master of atmosphere, invoking the grey world of postwar Britain and the clash of classes.

The Corpse With The Ruby Lips

Have you been missing those delightful mystery-travelogue works from Lyn Hamilton? Say hello to Cathy Ace and her intrepid sleuth, Cait Morgan, a Welsh-Canadian professor with a predilection for investigating crime. This is the eighth book in this series and I have somehow missed the other seven. Based on this one, the series is a winner. Cait is in Budapest, not enjoying herself. Her husband is back in Canada, her colleagues in Hungary are a dozy lot, and now a student wants her to find out who murdered her grandmother. Trouble is, granny died 40 years ago. This is a very old, very cold case. Nevertheless, Cait agrees to investigate – boredom can do that to you. This is a terrific light mystery with a wonderful setting and Ace is, well, an ace when it comes to plot and description. 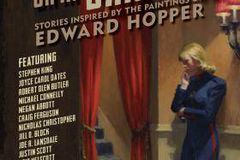 Review
Review: New crime fiction from P.D. James, David Rosenfelt, Tammy Cohen and more
December 9, 2016
Review
Review: Robert Harris's Conclave is one of the best crime novels of 2016
November 29, 2016
Follow us on Twitter @globebooks Opens in a new window
Report an error Editorial code of conduct
Due to technical reasons, we have temporarily removed commenting from our articles. We hope to have this fixed soon. Thank you for your patience. If you are looking to give feedback on our new site, please send it along to feedback@globeandmail.com. If you want to write a letter to the editor, please forward to letters@globeandmail.com.
Comments