There exists, in these modern times, the idea that any group of people can be "a family." Much of this has been driven by non-heterosexuals: In the days when queer people more often faced rejection, "chosen families" of beloved friends provided the unconditional love that biology didn't. More recently, reproductive technology has fertilized the family tree. The term "mother" is now often preceded by explainers such as "gestational" or "adoptive;" sperm donors come for dinner as themselves, rather than mysterious "uncles." If you live in a big, cosmopolitan city – such as Toronto, the home of author Camilla Gibb – you might think that a family is any tight-knit group of people who want to call themselves such.

But whatever the initial connection, maintaining family ties is work. It's not always hard work, but it's work that never ends – or if it does, that's because the project has been unsuccessful. In her new memoir, This Is Happy, Gibb zooms in and out of her formative years as she tries to figure out what family means for her, and how to build one that lasts.

To set the stage, Gibb shows that her biological family, while often loving, was never reliable. Her mother (a former MI-5 spy, maybe) ensured that her children had the necessities of life, but had a harder time providing deep affection. Her father evolves from passionate but erratic in her childhood to alcoholic and frightening by her teens. Gibb experiences a fair amount of anxiety and depression, but it's her brother, Micah, who bears the brunt of their dad's mental illness. Micah spends part of his adolescence living with him in what amounts to an unserviced country shack, developing his own addictions and weaving in and out of Gibb's life as he suffers.

In the age of the selfie, you can't throw a cat at a pile of books without hitting two dozen memoirs, many of which make a big deal out of nothing (the recent explosion of female comics is fantastic; their autobiographies, not so much). This Is Happy does the opposite, describing an array of life experiences both marvellous and painful in quiet language that often belies their extraordinariness.

As a graduate student, researching in Ethiopia, Gibb has a life-altering cross-cultural affair with a local doctor, in a remote village where unmarried men and women never interact. Later, after university, she is asked by an anonymous stranger why she looks so unhappy, and she explains that she would rather be an author than an academic. He gifts her $6,000. Later still, her father shows up wasted at one of her book signings, years after she hired a private detective to track him down. There's a conflicting sense of wonderment and matter-of-factedness when she describes such incidents. It's totally bizarre that this happened, she seems to say, but they did, so there you go.

Part of that remove might stem from the central story – that of a heartbreak that almost destroyed Gibb's ability to write. In her mid-30s, she married a woman whose elderly Catholic father gave the same-sex couple his blessing, a gesture that "broke more than a few hearts," she writes. At her wedding, she finally "had the sense of a circle becoming complete." But a few years later, her wife, Anna, leaves her for a mutual friend – while Gibb is 10 weeks pregnant with a longed-for baby.

Set loose from the foundation she had built for herself, Gibb spends most of her pregnancy resisting a major depression, an exhausting endeavour.

Musician Kim Gordon's recent breakup memoir, Girl in a Band, shows her emerging from divorce sharp, shattered and glittery; in contrast Gibb is buried, flattened and fighting for air. This Is Happy is a tiny green shoot peeking through a crack in heavy concrete, wily and survivalist, but tenuous too.

The arrival of Gibb's daughter brings another set of existentialist upheaval. While battling with intense writer's block, she reconsiders herself constantly as a human, a careerist and a friend. Her father goes missing again, but she, her mother and her brother try, and stumble, and retreat, then try and try again.

One of the most beautiful parts of the book is the description of a new relationship that emerges from the breakup: not with a lover, but her daughter's nanny. Named Tita, she shows up before the birth, and supports Gibb through the insanity and sleepless nights of the baby's early months. Gibb considers Tita her lifeline, but acknowledges that their relationship is uneven. Tita's salary supports 10 people in the Philippines: Her goal is to bring her husband here, but her immigration status is fragile and relies on Gibb's goodwill. It's a common interaction in Canada, but one that is rarely described as honestly as it is here.

As the intimacy between Gibb and Tita evolves, shows its flaws and rebuilds, both women embrace vulnerability as they actively decide to become a family. This time out, both of them know how hard that is. A baby, a text and rediscovering my brother’s love after a past horror
August 20, 2015 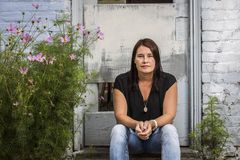