Christopher Moore's latest work, at its core, is about long meetings. In the hands of a lesser writer, it could be as frightfully boring as most meetings themselves. Instead, the book crackles with wit, intrigue and, despite knowing how it all ends, genuine tension. Three Weeks in Quebec City is an entertaining, informative and gracefully written must-read for every Canadian concerned about the state of our country's democracy. The story begins in the fall of 1864. British North America is comprised of the poor and poorly governed colonies of Newfoundland, Prince Edward Island, New Brunswick, Nova Scotia and Canada that was united in the forced marriage of what are now the southern portions of Quebec and Ontario. The Charlottetown Conference had taken place the month before. Delegates had agreed to form a new federal state. The goal of the 33 men assembled in Quebec was to forge a constitutional framework for their bold and improbable idea.

A harsh critic might note that Three Weeks in Quebec City is merely a rewrite of Moore's 1867: How The Fathers Made a Deal. Let's concede that Moore's hugely successful 1997 book is at least his newest work's father. Both hang their narratives on mini-biographies and invite us to the dinners and balls where alliances were made. Both take Sir John A. Macdonald down a peg. They note his being reluctantly dragged to the idea of Confederation, drinking too much and even fiddling with the minutes to balloon his actual importance.

The main point of both books is also the same. Moore believes, as did our founders, that the complex Canadian nation is best served by a state with power located not in the provinces but the federal government and not in the Prime Minister's Office but Parliament.

The founders' dedication to parliamentary democracy was demonstrated when each of the five delegations arrived with both government and opposition members. Important initiatives and decisions, they believed, are not the sole purview of the executive. Once assembled, they comfortably ignored public opinion. After all, parliamentary democracy empowers representatives to act responsibly on the citizenry's behalf. They never discussed the creation of a Bill of Rights. A properly constituted and operating parliamentary democracy, they thought, is all the protection from the state a citizen needs.

The constitutional framework they forged reflected their fundamental beliefs. The longest debate, for example, involved the Senate. They wanted appointed senators to ensure the undemocratic body would enjoy nothing but dignified, advisory, ceremonial power. A neutered Senate met their goal of aping Britain's bicameral parliament while locating real power where it belonged – in the elected House.

They afforded the central government a long list of powers to ensure its dominance. Important among them was the ability to disallow provincial laws and that any new areas of jurisdiction would become federal responsibilities. This division of power was fine with Quebec that needed to protect its French culture and tradition, the Maritimes that sought to avoid being swamped by the central Canadians and Macdonald, who didn't want provinces in the first place.

The Conference did not, as the book unfortunately hints, occur in a vacuum. Moore merely mentions at various points that the American Civil War was happening at the time. In fact, Canadian and British actions, including a well-financed Canadian-based Confederate spy ring, led to real and perceived threats of American reprisals that focused minds on the urgency of getting Confederation done. Moore mentions the Irish American Fenians but ignores how their threats influenced Maritime support for Confederation. Similarly, Moore affords scant attention to the growing power of Britain's Little Englander movement. Its advocating an end to colonialism rendered the old idea of Confederation a new and urgent necessity. The impatient Brits and angry Americans were the twin elephants in Quebec City conference rooms where Confederation was born and in the pubs, papers and Parliaments where it was later debated.

Much of what the founders created during their three weeks in Quebec remains in force. However, shortly after Confederation, court cases began handing more power to provinces. Beginning in the 1960s the executive began hoarding more power to itself. Macdonald, Cartier, Tilley, Tupper and the others would not recognize and would rage against today's Americanized balances of power.

Three Weeks in Quebec invites readers to mourn Canada's slow drift away from its centralist, parliamentary democratic founding principles. As recent events and trends have led many of us to consider the state of our state, the book's greatest gift is its glimpse at original intentions. Moore's insightful and valuable work encourages Canadians to ponder what has been lost and perhaps what needs to be won again.

Author Christopher Moore on his new book, his favourite sentences and more
June 20, 2014 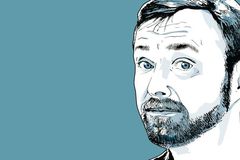