The Art of Death: Writing the Final Story

The Last Word: Reviving the Dying Art of Eulogy

Morrison also appears on the very first page of Julia Cooper's whip-smart rumination on death, The Last Word. This time it's Shadrack, from Sula, a former soldier who concocts his own grim celebration of suicide; a "DIY death parade," as Cooper writes, to enflesh her point that, "if you want the space to ruminate on death, dying and loss, you've got to sanction it yourself."

Cooper's mother succumbed to cancer in 2004, while Danticat's mother was diagnosed with the disease in 2014 – a decade's berth between their respective passings. Now both have published books that offer trenchant, clear-eyed looks at dying and what it feels like to live in the tumbling morass of grief that follows the loss of a love one. As Mary Gordon writes in Circling My Mother, "Perhaps for a writer, there is no such thing as simple mourning."

Cooper was only 19 when her mother died, and later immersed herself in academia, fulfilling both a master's degree and a PhD focused on the study of modern grief. Her book effectively stands as a refutation of Elisabeth Kubler-Ross's five stages of grief; namely that it has a beginning, middle and end. Instead, Cooper articulates that grief is a constant neverending thing; closer kin to The Song That Never Ends than Candle in the Wind. Cooper insists that by nature, grief cannot be cleaved and cellophane-wrapped into five tidy stages. Like the juices of expired meat, it tends to seep out of its packaging and contaminate its surroundings with a tainted smell. As such, grief has been relegated to the back doors of human existence, only acceptable to be expressed selectively in socially sanctioned environments, such as funerals. So it feels cathartic to read a book that goes deep on a subject that most people are either too awkward or too polite to broach in pleasant company.

For a book on death, The Last Word is strangely irreverent. Cooper draws on disparate references – from Roland Barthes to Four Weddings and a Funeral – to create punchy arguments that combine academic rigour with pop culture's mass appeal. For all the book's sadness, it's impossible not to harbour a sliver of a glee as Cooper asserts the similarities between the writings of Jacques Derrida and Cher's eulogy for Sonny Bono.

Most cogent are the book's passages analyzing the social media circus that sets up tents every time a celebrity dies and why it skews so distasteful. Facebook and Twitter inject an underlying nature of competition into our social interactions – their quantifying metrics of likes and retweets turn popularity into an easily wielded blunt-force object – which comes off as deeply insensitive when applied to the ultradelicate realm of death. Grieving via social media is a low-stakes act of mourning that lacks real vulnerability. Instead, it comes off as a race for individuals to stake their own claim in someone else's death.

While Danticat echoes Cooper's sentiment that the need to bear witness can feel almost unrelenting after a loved one has died, The Art of Death is less a penetrating tussle with grief than it is a calculated look at all the ways there are to die. Chapters address sickness, tragedy, suicide, murder, capital punishment and near-death experiences, and Danticat skillfully partitions grief into distinctive subcategories that correspond to the various causes of death. It is her second book on death, after 2007's Brother, I'm Dying, and she is extremely candid about her intentions: "Writing has been the primary way to make sense of my losses, including death."

The book is primarily a collection of examples of death from existing literature, from Anna Karenina to One Hundred Years of Solitude. Yet Danticat's lucid descriptions of her mother on her deathbed, her tremulous concern for extended family in the wake of the devastating 2010 Haiti earthquake and her profound disturbance after an acquaintance carries out a murder-suicide, prove a better conduit toward understanding the intimate nature of grief than lengthy passages from, say, Anton Chekhov's The Bet.

Far more subdued in tone than Cooper in The Last Word, Danticat reminds us that, in the words of Albert Camus, "great misfortunes are monotonous." It's impossible to pretend that there's anything new or exciting about death, yet each time it happens, it rips open an invisible chasm that swallows everything, while others remain blithely oblivious to its existence.

Reading about the grief of others is simultaneously voyeuristic and intimate. At times you feel a growing closeness with the subject matter, while in actuality you are never doing more than peering inside a specifically carved peephole into the author's pain. It's objectively creepy, but the transgressive feeling that comes along is magnetically irresistible.

The living think that they own death. They try to shape it, mould it, anything to make it more palatable or understandable. But The Art of Death and The Last Word just go to show that it's the other way around. Death owns us. Every rumination on the subject is akin to treading water, attempting to reach a truth without a speck of forward momentum. Seeking to communicate the impact of death is futile, because death is inherently absurd and defies comprehension. Books on death cannot adequately convey the experience of grieving, but they sure can be rewarding to read.

Isabel B. Slone is a writer living in Toronto. Her work has appeared in Toronto Life, Fashion and The Walrus. 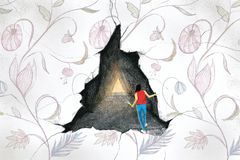