I was in Lucy Barton's head from the very first page.

It's rare when this happens – when the words of a book hypnotize you. The experience doesn't feel like reading at all. It's like falling into someone else's consciousness.

I Am Lucy Barton, the new novel from Pulitzer Prize winner Elizabeth Strout, tells the story of an author looking back on the nine weeks she spent in the hospital after complications arose following an appendectomy. The story Lucy tells is one of discovery – about her voice as an author, the need to go "to the page with a heart as open as the heart of God," as a fellow writer once told her, as well as about her identity as a woman.

Strout's skill in channelling Lucy's voice is breathtaking, especially considering it's the first time the bestselling author of Olive Kitteridge and The Burgess Boys has written a novel in the first person. And it's no wonder the book's title is a declaration – one can imagine the insistence of this voice in Strout's head, urging her to write this story. There's a cadence to the sentences that suggests Lucy's tentative confidence and brave curiosity about her past. We learn about Lucy through what she notices; how she recalls her childhood; and by discerning the realities she cannot fully express or even see.

That is the gift and genius of this book. We're watching as Lucy tries to uncover truths about her life. And yet we become aware of them before she fully does, which is both heartbreaking and beautiful. From the beginning, we're aware of Lucy's fragility and her way of looking at the world as an outsider – a keen observer, not quite a part of it, and yet waiting for it, or for someone, to show some mercy. She is gentle. The world is harsh, her childhood was harrowing and she doesn't really know how much she has been hurt. Nor does she know what has saved her – not completely.

Lucy's return to the past starts when her mother, whom she hasn't seen in years, comes to visit her in the hospital. They begin to gossip about people from her childhood in a rural town in Illinois. And, gradually, the reader comes to understand what that childhood was like. They were poor. For most of her childhood, Lucy lived with her two siblings and their parents in an unheated garage with one window. Eventually, through academic strengths, Lucy escaped her background (she now lives in New York). Some of the tension between Lucy and her mother is this class divide.

But Lucy's need for love stands between them, too. That she loves her mother so much, and still wants something from her, despite everything we know about her childhood, is a kind of exquisite torture. We want her not to need her so. But, of course, that's a truth of childhood abuse in many cases. The inner child still seeks the love and recognition she never got. As Lucy recalls episodes of her childhood – even when describing the horrifying experience of being locked in a truck and the appearance of what she imagines is a snake – a full picture blooms in our heads while she still protects herself from knowing it all.

"I wrote down things I could not say," she explains about a visit to a psychiatrist after recalling a repressed memory from her childhood. And yet here, as she writes down her story, there's still so much she does not say. That we begin to imagine what Lucy has repressed or will not share is such clever plotting that I found myself rereading passages of the book to see how Strout did it.

Part of what's intriguing – and poignantly tragic – about Lucy is that she's able to see some people clearly but not others. She recalls a brief love affair she had with a professor at university. He was an artist. She loved that she didn't understand his art. But as she describes him, we start to see that he was a jerk. She loved him, still, even when he disappointed her with his shallowness. But when she tells him that she and her family ate a lot of baked beans and he responds insensitively, asking "What did you do after that, all hang around and fart?" she suddenly sees that she could never marry him. "It's funny how one thing can make you realize something like that. One can be ready to give up the children one always wanted, one can be ready to withstand remarks about one's past, or one's clothes, but then – a tiny remark and the soul deflates and says: Oh."

And she clearly perceives the character of the doctor who attended her in the hospital. Sure, there's his appearance – "a jowly-faced Jewish man" – but it's in the details – the way he touches her forehead and swooshes the privacy curtain around her bed – that we know she understands his compassion and the "gentle sadness" he wears on his shoulders.

She wears the same cloak of gentle sadness. "It interests me how we find ways to feel superior to another person, another group of people. It happens everywhere, and all the time. Whatever we call it, I think it's the lowest part of who we are, this need to find someone else to put down," she writes.

She has experienced cruelty but understands – and sees – the beauty life can hold. She remembers a tree that stood on its own in the middle of cornfields near her home in Illinois: "Its stark-ness was striking. For many years I thought that tree was my friend: it was my friend," she writes. And, through her hospital window, she can see the Chrysler Building. "The light from the Chrysler Building shone like the beacon it was, of the largest and best hopes for mankind and its aspirations and desire for beauty."

This ability to love life, to notice small kindnesses, to remember the light in the sky and across the fields rather than the horrors of her childhood home, is Lucy's salvation.

It is what we allow ourselves to see that helps us survive.

Sarah Hampson is a columnist with The Globe and Mail.

Elizabeth Strout: ‘In real life we have only our imaginations to know what the lives of others may be like’
January 15, 2016 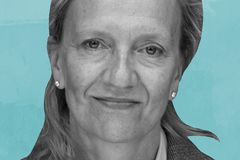 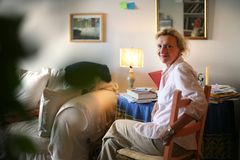