Buck 65 is huge in Europe. I know this not just because Buck 65 (a.k.a. Rich Terfry, the alternative hip-hop artist and host of CBC Radio's Drive) boasts about it, in that mock-humble way Canadians tend to boast about things, in his new memoir. I know this because when I was 17, drinking in a British basement bar (or "pub") with my now-brother-in-law's ID, a bartender all but turfed me for not knowing who Buck 65 was. "You from Canadarrrr," he barked, in that sort of hollow, guttural British accent that made him sound like he was gurgling raw sewage, "an' you ain't never hearda Booook 65?!"

"No," I said, shaking my head in defiant annoyance. "I ain't never." Off I went with my double Bell's and lime, which is the go-to drink for someone barely old enough to drive a car who is affecting classiness and sophistication in a foreign country. Rattled by the barkeep's snarling insistence, I never bothered to check out Buck 65. And I still haven't. Even while reading his memoir I never bothered. Not even for research. At a point, I figured it was better not to. Better to review Buck 65's memoir as a memoir, unshackled by whatever presumptions, warranted or otherwise, I have about the man's music. (I imagine it sounds something like Tom Waits rapping through a tuba while jigging in a haunted junkyard.) And anyway, do I need to hear a Woody Allen clarinet solo to talk about Manhattan? Do I need to appreciate Steve Martin's nimble banjo fretwork to think The Jerk is funny? No.

So I can't, and won't speak, for his contributions to alternative hip-hop, whatever that even is. But I will say that Rich Terfry is a pretty darn good writer. And Wicked and Weird is an exceptionally satisfying, intermittently edifying, book about a guy I couldn't have cared less about two weeks ago. (It helps, perhaps, that Terfry weaves together memory and made-up stuff, recently revealing that some of the book is pure fabrication.) Terfry recounts his youth in the no-horse town of Mount Uniacke, N.S., where, he suggests, "evil fed off the man-made hatred that polluted the breezes." Terfry talks about his love for baseball – which is perhaps the most boring and clichéd thing a person can love, other than Paris, which he also loves – and his stint as a Halifax hip-hop DJ (where he was justifiably beat up by a local MC who accused him of co-opting the culture), and his tours through Europe, and the two months he spent cooling his heels in a Russian prison. He also talks, at length, about his failed romances.

Of Kid in the Hall Bruce McCulloch's recent memoir, a friend of mine, Carly Lewis, wrote that, "women write memoirs to tell the truth; men write to be acquitted. Lousy husbands and absent fathers, rockstars, wrestlers, liars, lawyers – they write memoirs and find forgiveness just by admitting they've been cruel." It's an idea I've been rolling around in my brain for a while, and one that seems self-evident reading Wicked and Weird. Terfry's seemingly self-absolving, and self-absorbed, confessional was presaged by a widely circulated Facebook post last April, in which he professed, "I'm not the person you think I am. I've destroyed every important relationship in my life by lying and cheating." Having no real opinion of Terfry, I didn't think much of it, other than harbouring a cynical (and, it turns out, accurate) suspicion that such woe-is-me theatrics were essentially serving as a teaser trailer for his book.

Terfry's book feels very knowingly of-a-piece with that grand literary tradition of mock-confessional male narcissism: the Roths and Richlers and Leonard Cohens and Nick Caves. His not-quite memoir straddles that line between honest self-recrimination and braggadocio. When he details the time he was nearly seduced by Baywatch star Pamela Anderson, it feels like a doubled-up brag. Not only did he almost score with the ne plus ultra of hetero Canadian teenage boy fantasies, but he did the good, decent thing and didn't go all the way, fleeing back to his French girlfriend, Claire. (She had already left him, and good for her.)

If I sound accusatory, it's because there's no other way for a person to be. The deep disgust I feel for Terfry reading these sections is ultimately a kind of projected hatred of myself; guilt and self-loathing projected onto some nominal Canadian radio celebrity. The thing is: I think Terfry knows he's doing this. And he stirs these emotions so perfectly that the book feels productive. It's not cathartic, exactly, because nothing is resolved. When he asks his wife, Emily, to marry him, he does so with the knowledge that there is "an evil demon who knew I didn't deserve her crouching in a cell inside of me." (In the margins of the passage I scribbled, racked by the sharp sting of identification, "ayoye!")

Terfry knows that being self-admonishing is itself a kind of self-congratulatory pose; that being a capital-M Man is always both self-flagellating and self-fellating. Perhaps there are men who aren't like this. But I doubt I've ever met them. And I doubt they lurk among my rookery of friends and acquaintances who, like me, self-loathe for sport, who distrustfully embrace the filth, the nausea, the demon inside us instead of attempting to dispel it. For we deem it un-dispellable.

This is not a good thing. It's an awful, stupid, vile, selfish thing. It's the sort of thing I'm slowly coming around to knowing and that Terfry clearly knows. For all his mock-humility and thinly veiled egoism, his hiding of himself in fiction and fabrication, Terfry doesn't want to be acquitted. He's writing to tell the truth. And sometimes – often, even – the truth's as nasty and unpleasant as Tom Waits rapping through a tuba while jigging in a haunted junkyard. 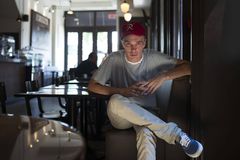 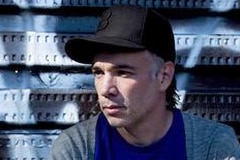