Somewhere in Canada, there lives a man with X-ray vision. Walking the streets of his home city, he can read the façades of buildings, the secret language of windows and fire escapes "and build up a surprisingly accurate mental map of a building's interior," Geoff Manaugh writes: which doors will be unlocked, where the biggest apartments are, where the wealth is concentrated. He calls himself Jack Dakswin, and he is an expert observer, "so well versed in the legal and spatial marginalia" of the city "that it's as if every room, apartment, home and private business there is an open book."

He is a professional burglar. And in his fantastical new book, Geoff Manaugh taps the perverse genius of Dakswin and his colleagues to see the streetscape of the city with fresh eyes – and give the realm of architecture and urbanism, which can seem daunting to the average reader, the kinetic thrills of a heist film. "Some of the most interesting responses to a building," Manaugh writes, "don't come from architects at all, but from the people who are hoping to rob it."

Why? Because they break the rules, of law, of gravity and of architecture. Burglars go where we aren't supposed to go; they are "masters of architectural origami," he writes, "dark wizards of cities and buildings, unlimited by laws that hold the rest of us in."

Manaugh introduces a string of them, starting with George Leonidas Leslie – a debonair young man who arrived in 1860s New York and saw "that he could use his architectural skills to rob the place blind." Raised in privilege and trained as an architect, he charmed bank presidents and engineers into sharing the blueprints of their vaults – then built copies of them in warehouse hideouts, where he and his gang could rehearse (in the dark!) their lines of assault and safe-cracking choreography. This is where the Hollywood trope of the "duplicate vault" was born, he writes – think of Ocean's Eleven or The Italian Job.

It's hard not to love these master criminals, using their ingenuity and discipline to nab some of the wealth of Gilded Age robber barons. Such an act feels more like solving a puzzle than committing a crime – and this is, as Manaugh suggests, why the heist genre in novels and movies is so perennially powerful. A Burglar's Guide to the City captures that sense of turning the world inside out to find its hidden logics.

On the other side of the law, police and investigators who counter burglars' efforts with their own spatial magic. In England, we visit the "capture houses" fitted out by English police, laptops left enticingly in view of open windows; and Manaugh reads the geography of Los Angeles, as seen from a police helicopter. With banks scattered along its 900 miles of freeways, it is a place built for bank robberies. And under the ground are tunnels carrying forgotten creeks, "secretly connecting things in the darkness – and they can be used." By the dark wizards of the city.

Manaugh, a freelance journalist and sometime architecture-school instructor, gives a tour through the physical and psychic landscapes of the city with a style that's uniquely his. He is best known for BLDGBLOG, the personal blog that he launched in 2004. (Most solo bloggers burn out after a few years; with my own much less ambitious blog about architecture and urbanism, I lasted less than four.) Manaugh is still going on his private ultramarathon into the wildest corners of architecture, landscape and urbanism.

He was born to blog: he's prolific, has a fiery curiosity about ideas of all sorts and is a lightning-quick associative thinker. Online, he flits from J.G. Ballard to conceptual art to maritime law to the history of forts. He'll riff on the history of trap doors in popular culture, or wax on about amazing 1,100-year-old communal "step wells" in northern India.

In 2009, he published a stack of that material as The BLDGBLOG Book. As the title suggests, it was a bit of a catchall. With A Burglar's Guide to The City, Manaugh has found a rich vein of narrative running through and under the streets of the North American city. Burglary is a "spatial crime," or as he puts it, burglary "requires architecture. Without an inside and an outside, there is no such thing." And he is ultimately interested in the way burglars move: cutting through walls from house to house, sliding like ninjas through ventilation shafts, roaring through miles of Los Angeles storm sewers on Suzuki 4x4s.

Manaugh, as a writer, can't sit still. He captures this magic with one metaphor after another. Burglars are "a parade of body parts: toes, wigs, legs, arms, whole nude bodies sticking out of places they never should have been in the first place." Or they're "like disembodied stagehands, removing objects from one scene and placing them down in another." Who doesn't want to move with that kind of ease?

Of course, burglars are not in fact noble figures; they're crooks, and most of them are desperate and hapless. Most get caught. Manaugh acknowledges all this (and when his in-laws' house in suburban London gets burgled, that brings the moral point home).

His larger point is a bit elliptical but clear enough: that when you think about breaking the rules, you start to understand the rules more clearly. Our lives are shaped by the systems of urbanism, from street design to window manufacturing to corporate ownership of downtown plazas to the floor plans that developers cook up for our homes. And the culture of architecture. But these features of the landscape remain, usually, invisible to us.

Not to Jack Dakswin. His criminal eye reflects a strand of thought that's as old as the industrial city: Nineteenth-century Paris saw the birth of the flâneur, the solitary stroller and observer of the urban landscape. This figure would seek to "see the world, to be at the centre of the world," Charles Baudelaire wrote, "and yet to remain hidden from the world." That strain of poetic looking became more political, as in the surrealist-Marxist urbanism of the Situationist International movement: "All space is occupied by the enemy. We are living under a permanent curfew. Not just the cops – the geometry."

We might be constrained, but burglars aren't. As Manaugh writes about the genre of the heist movie, "burglary becomes a myth, a symbol, a metaphor: it stands in for all the things people really want to do with the built environment, what they really want to do to sidestep the obstacles of their lives." Or, at least, to see what's shaping our lives – to see through concrete and understand the forces that are hiding behind the walls. 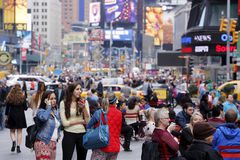 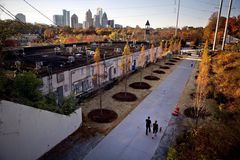 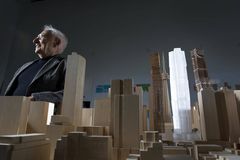