Shirley Kaszenbowski is middle-aged and middle-class, nearly invisible while wandering the busy streets of Toronto in search of her mysterious secret-agent lover, Coenraad. She idly browses department stores and kills time in coffee shops, trying to understand the cryptic messages he sends to her in the pages of National Geographic. Waiting for his arrival alone in her room in the King Edward Hotel, Shirley flips through a stack of postcards that remind her of their fleeting moments together. Their meetings are highly secret rendezvous spanning the globe, his coded missives driven by the paranoia of his work for "The Agency," and their unknowing families. On the surface, the novel sees Shirley locked in a painful game of fruitless hope, a lonely housewife anticipating an amorous sign, longing – and lusting – to be with him again.

Originally published in 1980, Basic Black with Pearls is a lauded (if lost) feminist classic that unravels the ennui and desperation of the disregarded woman – "from whom nothing is wanted and from whom nothing is expected." It echoes narratives like Charlotte Perkins Gilman's The Yellow Wallpaper, Sylvia Plath's The Bell Jar and even Joan Didion's Play It As It Lays; its taut prose exploring the roles available to women, tinged with an evolving suggestion of madness made by a uniquely female lot. Basic Black with Pearls was Polish-Canadian author Helen Weinzweig's second novel, a dazzling effort from someone who only began writing well into her 40s (her first published story appeared when she was 52,) and who famously never received a rejection letter.

Weinzweig is often referred to as one of Canada's first feminist fiction writers, her debut novel, Passing Ceremony, published shortly after Margaret Atwood's revolutionary The Edible Woman and the gender-preoccupied Surfacing. According to Weinzweig, her political literary sensibilities were formed in reaction to the male-authored books she read while spending two years recovering from tuberculosis, and then while supporting her husband's composing career and raising their two sons. "One of the things I had to learn after reading all this male fiction was, what do I as a woman feel like," she said in 1990. "All the literary forms were men's, all the philosophies were men's philosophies … I had to translate these forms into the female."

Thirty-five years after its initial publication, and a hundred years since Weinzweig's birth, Basic Black with Pearls is getting an admirable posthumous reissue via House of Anansi's A-List series, asserting its relevance decades after it won the 1981 Toronto Book Award. Despite being embraced by feminists, and receiving a positive critical reception, Weinzweig's writing didn't find mainstream success with Canadian readers during her lifetime, something she was keenly aware of. She once wrote in a letter to The Globe and Mail that "Canadians hate success … Basic Black With Pearls has had rave reviews and has been bought by William Morrow Company in New York. Success and 60 cents will get me a ride on the subway. No one can find a copy of my novel in the bookstores."

Weinzweig is certainly deserving of a new crop of readers this new edition is meant to entice – her brisk style and tone remain fresh to a contemporary audience, and her subject matter is still disturbingly relevant. The author's obvious talent lies in embedding the surreal in an easily identifiable landscape, our protagonist aimlessly traversing a vivid urban milieu while dredging up (perhaps) fictional recollections. Journeying under the alias "Lola Montez," Shirley's movements provoke both her troubled memories and her madness, leaving the reader incapable of discerning what is real from what is manufactured. While wandering, she realizes how truly alone she and the other "solitaries" are, noting, "Acts of fellowship … take place only during bombings and public hangings. Under normal conditions strangers must avoid each other's strangeness."

The prose is infused with the anxious disillusionment of the neglected woman, forcing us to plunge unprepared into the aforementioned strangeness we so often avoid. Shirley's loneliness and yearning are apparent in every conversation and seemingly meaningless action – she seems to cease to exist even when spoken to, making the fantastical meeting with her secret agent all the more vital. Her lover, and the codes he sends, come to be seen as a false, even childish totem of hope – something to prevent her from falling into an oblivion of insignificance.

Eventually it becomes dizzyingly apparent that Shirley's insanity is driving this complex narrative fantasy, allowing Weinzweig to highlight how men so often decide women's destinies, and how egregiously they limit their choices. Yet "Lola" is not simply a "crazy" cautionary tale, but instead a stand-in for any woman who has had her life dictated for her, and who yearns for an impossible way out. It is her rich inner thoughts – though flawed and disturbing – that keep her hanging on, and ultimately offer her a real escape.

Basic Black with Pearls is certainly a text worthy of a revisit, its theme of the danger of a limited life sadly as blisteringly significant as it was 35 years ago. The novel offers little resolution, and even less clarity, making it an all the more authentic commentary on the trappings of domestic, suburban life. The reader is left uncomfortable, disturbed and as lost as Shirley is – which is, perhaps, the most potent way Weinzweig could deliver her feminist message.

Book Review
Review: Nelly Arcan’s Breakneck shows why she’s one of the best writers Canada has ever produced
June 26, 2015 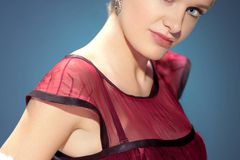