When protesters shout "Whose streets? Our streets" they are indirectly touching on one of the biggest urban debates of our time.

For decades in North America the answer has been clear. Whose streets? Drivers' streets. Pedestrians were relegated to the sidelines, with the legal concept of jaywalking invented to keep them off the road. Surface transit, when tolerated, was usually forced to operate amid mixed traffic that slowed it to a snail's pace. Any challenge to the status quo, meanwhile, was cast as part of the villainous and vaguely European "war on the car."

But attitudes are changing.

Across North America, the younger generation is showing much less interest in driving. The so-called sharing economy is gaining steam. Developments like driverless cars will change transportation in unknown but possibly profound ways. The world is rapidly becoming an urban one, with cities competing for the best talent. Millennials say they want walkability, downtown living and good transit.

With these shifts have come sharper debates about how we use the space between building facades.

Are neighbourhood roads for the benefit of people driving through, or for the people who live there? Is the mark of a successful street the number of cars it can handle, and how quickly they move, or the strength of the economic activity lining it? Is it worth slowing down cars if that makes life safer for pedestrians and cyclists? Should a bus transporting scores of people get priority over private vehicles that usually carry just one?

These are the questions Janette Sadik-Khan wrestled with for more than 6 1/2 years as transportation commissioner of New York. Her term, under former mayor Michael Bloomberg, made her celebrated in urban and transportation circles. It was also a tumultuous time that left scars, and enemies with long memories have come out of the woodwork to attack this book and her legacy. But few would argue that she failed to create the legacy of a meaningfully transformed city.

Bicycle lanes criss-cross New York. Space has been carved out for express buses, letting these vehicles move much faster. The Citi Bike program has been wildly popular, signing up 15,000 people on the first day. And in the most visible and viscerally fought change, the administration took space from drivers to create pedestrian plazas, including the vast one at Times Square.

People flocked to the new spaces, sometimes appearing minutes after work crews blocked off a stretch of road. And although there have been complaints that the new Times Square attracts too many tourists and hucksters, there was an outcry last year when the current administration mused about giving the area back to cars.

Remaking cities isn't easy, warns Sadik-Khan. But for those willing to try, this collaboration with Seth Solomonow, her communications adviser when she was commissioner, is dubbed a "handbook for an urban revolution."

The book combines a history of her time in office – the fights, victories and failures – with ground-level lessons on how to look differently at streets, how to re-model them and how to create a better city.

It succeeds better at the first task. The insider anecdotes will delight people who watched these changes from a distance.

Sadik-Khan admits that she thought she'd blown her chance at the job when, after being asked why she wanted to be traffic commissioner, she set the mayor straight on his misconception by countering that she didn't want that limited role, she wanted to be commissioner of transportation. She relates how afraid she was when the mayor tried to sign out a Citi Bike for a photo-op, and she stood there worrying that the unreliable system would fail in front of the media.

A battle in Brooklyn – where bike lanes got push-back on one street from a strictly observant religious community objecting to semi-covered female cyclists, and on a parallel street by merchants worried about their parking spots – will resonate with anyone who has sat through a public meeting. Her cutting rejoinder to Anthony Weiner, the sexting congressman who had promised to tear out the new NYC bike lanes if elected mayor, is almost worth the price of the book.

The book is on trickier ground when laying out instructions on how to re-model streets. Although the examples are valid and accurate, nitty-gritty descriptions about lane widths and curb extensions fall into an uncomfortable middle ground. Professional planners won't need this. Laymen readers may need to be convinced they need to learn it.

But these examples – including best practices from cities around the world – offer a welcome inspiration. Urban advocates may gain a new understanding of how city transportation works, how it can be changed and how important it is to get it right. Having learned what is possible when re-thinking public space, citizens will have the language needed to push back against entrenched attitudes at city hall. And they will be less likely to fall victim to what planners often say is the most dangerous attitude: that the lessons of other jurisdictions don't apply.

Oliver Moore is The Globe and Mail's urban transportation reporter.

A New Archaeology for the Leslie Street Spit: A history in photos, bricks
March 11, 2016 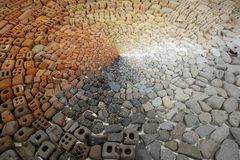 Review: In The Road to Little Dribbling, Bill Bryson returns to his beloved ‘small island’
November 6, 2015