In his famous address dedicating a Civil War burial ground in Gettysburg, Pa., U.S. President Abraham Lincoln called on Americans loyal to the Union to finish the bloody work of the war to ensure that their 87-year-old nation would live to see "a new birth of freedom."

But as James Laxer reminds us in his new book Staking Claims to a Continent, the United States was just one of three nations undergoing birthing pains in North America in the 1860s.

A second would-be nation, the Confederate States of America, split off from the United States after Lincoln's election in 1861 to go it alone as a republic built on slave labour. A third, the Dominion of Canada, formed in 1867 out of the squabbling regions of British North America to avoid being swallowed up by the land-hungry hegemon on its southern border.

In Staking Claims to a Continent, the second book in a planned trilogy, Laxer strives to capture the broad sweep of history that set off this continent wide burst of nationbuilding while painting more intimate portraits of the central players in the drama. This is a tall order, especially for a book that clocks in at just over 300 pages, and it forces Laxer to take some short cuts.

One of them is to build his story around a decidedly old-school "great man" theory of history, focusing on the three political leaders who guided their respective nations through the crucible of the 1860s: Lincoln, Confederate president Jefferson Davis, and Canada's first prime minister, John A. Macdonald.

All three happen to be fascinating men, but especially in the case of Lincoln, they're also among the most exhaustively chronicled in modern historiography, and in the roughly 100 pages it takes Laxer to wheel the stage sets into place before he can begin his real story, the book can sound like one of those primers designed to interest schoolchildren in the fathers of their country.

Here, for instance, is Laxer describing Lincoln's childhood: "As a youth, Lincoln had few books to read and he made much use of the Bible, Pilgrim's Progress, and Aesop's Fables. He drew moral lessons from these works, including the crucial conviction that individuals could make a difference to the world around them."

Still, shortcuts and all, this is smart popular history. Taking the reader far back in history, Laxer – a one-time left-wing politician who now teaches political science at Toronto's York University – explicates the complex economic and political forces that shaped the North American continent in the 19th century.

A generation after the 1848 revolutionary explosions in Europe, the Industrial Revolution had drawn a sharp line across the United States dividing the mechanized North, whose factories depended on cheap immigrant labour, and the agrarian South, whose vast factory farms required slave labour to raise and pick the region's cotton.

By the mid 19th century, Laxer explains, the two economic systems were on a collision course, with "the northern capitalists [growing] in power and wealth more rapidly than the southern slave owners, who reached the conclusion that they needed their own exclusive state to protect their interests."

When the South finally left the Union in 1861, leaders of what was then called British North America quickly set about forming a union of their own to avoid being drawn into the war – or worse, being sucked up in the United States's inexorable westward expansion.

In the short term, one surmises, this possibility may have been more alive in the minds of the Canadians than in those of war-weary Americans. As Laxer recounts in the first book of his North American trilogy, Tecumseh & Brock, the U.S. briefly – and rather ineptly – invaded Canadian territory in 1812, and throughout the 19th century, America's leading citizens lustily proclaimed the country's Manifest Destiny to occupy the entire continent, including parts of British Canada. But the Civil War quickly engulfed the North and South in an all-consuming battle that precluded all but the loosest talk of continental expansion.

Laxer breathlessly relates a diplomatic incident in late 1861, in which an American warship intercepted a British mail ship, the RMS Trent, and captured two Southerners en route to London to seek British recognition of the fledgling Confederacy. But after a brief bout of sabre-rattling between the United States and Britain, the Americans backed down and meekly handed over their Southern captives. "One war at a time," Lincoln is reported to have cautioned his Secretary of State.

Of course, Macdonald and his fellow colonials knew the Civil War would eventually end and set about building a nation-state as a bulwark against that day. The story of how the English-speaking Protestants of today's Ontario and the French-speaking Catholics of today's Quebec made common cause with residents of the Maritime provinces, and how the Confederation they fashioned reflected the lessons they had learned from the failures of the American Constitution, makes for some of the book's most absorbing reading.

For Laxer, Macdonald, the sometimes slippery Scot who later got caught with his hand in the cookie jar for taking money from financiers of the transcontinental railroad, is the hero of this earlier foundational tale. "Even though he is often and unfairly relegated to the status of the skilled and somewhat unsavoury political operative, Macdonald was the visionary behind the Canadian federal union," Laxer writes.

The glue that bound the fledgling Confederation together was its strong central government that in Macdonald's view avoided the fatal weakness of the American system, which by derogating the balance of power to the states, opened the door to the factional split that sparked the Civil War. "We must reverse this process," Macdonald told a political gathering in 1864, "by strengthening the general government and conferring on the provincial bodies only such powers as may be required for local purposes."

Unlike the United States, which was born out of a revolutionary war, the founding of Canada was chiefly a political matter carried out in committee rooms and legislative chambers, and readers who like a bit more blood and thunder with their history may wish to start with Tecumseh & Brock, Laxer's bestselling history of the War of 1812. But if this is a quieter volume than its predecessor, and if it at times treads familiar ground, it nevertheless adds insight and texture to Laxer's continuing tale of how a continent of bickering, mutually suspicious European settlers created the remarkably peaceable North America we enjoy today.

Michael Bourne is a staff writer for The Millions. He lives in Vancouver.

Book Review
Review: In Bush, Jean Edward Smith has woven a compelling examination of an unlikely ascent to the White House
July 8, 2016 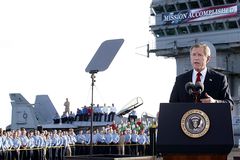