Title
This Is a Book About the Kids in the Hall
Author
John Semley
Genre
Non-fiction
Publisher
ECW
Pages
303
Price
$19.95

"Everything we touch turns to cult," Bruce McCulloch once said about the Kids in the Hall, a beloved comedy troupe he co-founded with Dave Foley, Kevin McDonald, Mark McKinney and Scott Thompson in Toronto in 1985.

It's a dismissive, disappointed assessment and may well be the most telling quote in John Semley's exhaustively researched and wonderfully written book about the KITH, whose talent as performers and writers earned them access to huge platforms to exhibit their work.

But, as Semley details in This is a Book About the Kids in the Hall, their admirable devotion to weirdness and a deep-seated mistrust of any outsiders or bosses who attempted to meddle with or soften their uncompromising comedic perspectives has left them with more credibility from fans and fellow comedians than stardom in the world at large.

They're a cult phenomenon that constantly gains more devotees.

Semley is among a cohort of fans who discovered the Kids in the Hall well after they shut down production on their outlandish and inspired sketch show, which, under the stewardship of hugely respected comedy impresario/Saturday Night Live producer Lorne Michaels, ran concurrently on CBC in Canada and HBO (later CBS) in the United States between 1988 and 1994.

Unlike SNL's topically oriented bits, KITH didn't engage in celebrity impressions or do much to tie themselves to any specific era – a wise move that more or less ensures their surreal, original characters, sketches and monologues continue to exist in a relatively timeless state. The Kids were funnier than almost anybody else back then and, if you catch their old creations now, you will laugh and puzzle over them in much the same way some of us did 25 years ago.

According to Semley, when they used to stage a new show every week at the Rivoli in Toronto, the KITH were a word-of-mouth phenomenon that went from performing for nobody to generating such demand, people lined up down the street to see them. It happened in Calgary when McCulloch and McKinney worked under the moniker the Audience, and then it happened again when the pair moved to Toronto and teamed up with Foley and McDonald and eventually Thompson to finally become the Kids in the Hall.

People seemed to relate to their irreverent, rebellious streak and, to use a cliché, the five-piece clearly had chemistry when they worked together (which became more evident after they broke off to do things apart with uneven results).

Though possibly the closest thing to Monty Python's Flying Circus in their breadth of characters and wit, plus the sheer joy they took in delving into unsettling human behaviour, the Kids didn't really follow anyone.

Theirs was and is a comedic statement with no real precedent and they knew it. They just seemed so sure of themselves with these porcupine prickly attitudes that were arresting and, startlingly, remain so decades later.

When you're out of time, it's a blessing and a curse though.

Semley writes that he first encountered the KITH via reruns on specialty comedy channels some years after each member was onto some other creative pursuit. A journalist, he wound up speaking to them about such projects, writing pieces (including an extensive oral history of KITH in 2013) that undoubtedly contributed to continuing interest in the troupe.

Having limped apart acrimoniously after their ill-fated 1996 film Brain Candy bombed commercially and critically (save for a pass from the late, astute Gene Siskel), KITH have reconvened to write and tour a number of times since 2000.

They're buoyed on by the likes of Semley and a new generation of fans who recognize the troupe as the trailblazers in sketch and "alternative comedy" they are.

But Semley is also wary of the fights they picked with television and film studio heads and some stands they took for their art, which he implies may have hampered their ability to succeed. He recognizes in each member some kind of father issue; all but McKinney have recounted some manner of distance or abuse from dads who drank or shielded themselves from their sons with indifference.

It's enough to make any armchair psychologist see where their constant lampooning of "suits" and "normal" families while also embracing disaffected goons and subterranean miscreants might all be a form of acting out for attention.

In his in-depth analysis and really colourful, funny writing, Semley brings fans into the psyche of these "five losers," as McCulloch once called them.

It's not always pretty and they were perhaps destined to be a dysfunctional family.

But the Kids in the Hall are a family and a truly funny one at that.

Celebrating The Kids in the Hall, plus four other things to do in Toronto
October 6, 2016 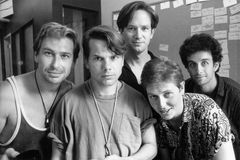 Book Review
Bruce McCulloch is at his best when candid and irreverent in Let’s Start a Riot
October 31, 2014