In 1979, one of the most influential books about Dmitri Shostakovich, the Russian composer, was published. It is called Testimony: The Memoirs of Shostakovich, as related to Solomon Volkov. There is credible doubt as to the veracity of the book. There are those who believe Volkov is a fraud who did not know Shostakovich well enough or speak with him often enough to have transcribed the composer's memoir. There are others, including the composer's son, Maxim, who believe the Shostakovich of Testimony to be a faithful version of the man, whatever its provenance. But beyond the insights the book may or may not provide about Dmitri Shostakovich, Testimony is fascinating in the questions it asks about art and its relationship with power – Stalin and Communist bureaucracy, in particular. It is the portrait of an artist who is forced to bend his art to accommodate power while, within the work itself, deploying irony, subversion and resistance.

For anyone familiar with Testimony or with the musicologists "wars" about its authenticity, it will be difficult to read Julian Barnes's new novel without being reminded of the arguments and counter-arguments regarding Shostakovich's personality. Was he secretly dissident or was he a coward who did whatever the regime asked of him while suffering inwardly for his cowardice?

The Noise of Time does not come down firmly on one side or the other. The book is not a trial of Shostakovich. Barnes takes three exemplary episodes from the life of Shostakovich, moments when the composer was confronted (threatened, importuned) by "power." The first is from 1946 – after the Soviet premiere of Shostakovich's opera, Lady Macbeth of Mtsensk. Stalin himself was in attendance: He loathed the opera and, according to legend, wrote a review calling it "muddle not music," occasioning violent attacks on Shostakovich's work. The second is from 1948 when, at Stalin's behest, Shostakovich read a paper at a peace conference in New York. The paper, written for Shostakovich, condemned the music of the West, including that of Stravinsky, whom Shostakovich admired. The final episode – and third of three chapters – takes place in the 1960s when Shostakovich, at the insistence of the Khrushchev government, joined the Communist Party, in order to lend a flattering sheen to the "new" Communist Party.

As Barnes writes, "A soul [can] be destroyed in one of three ways: by what others did to you; by what others made you do to yourself; and by what you voluntarily chose to do to yourself." Each episode (each chapter) depicts one of these three ways. More, each is tersely well-handled. Barnes nicely conveys the contempt that power has for its victims as well as the anguish his Shostakovich feels at his own compromises and tergiversations.

If that were all of Barnes's accomplishment, The Noise of Time would still be an engaging read, especially for those who know their 20th-century Russian history. But although the novel is concerned with art and its confrontations with power, Barnes is also after something deeper. The book is a meditation on the idea of character and integrity.

Throughout The Noise of Time, we see how other artists – both talented (Stravinsky, Prokofiev) and untalented – deal with power. Barnes suggests that character and fortune are at least as important as moral rectitude in determining how a human being deals with power. Towards the end of the novel, Barnes writes, "[in fiction,] Integrity is like virginity: once lost, never recoverable. But in the real world, especially the extreme version of it he had lived through, things were not like this. There was a third choice: integrity and corruption."

Barnes's Shostakovich is, in all facets of his life, a man who compromises because, apart from his devotion to music, he cannot make up his mind about what he wants. It is his nature to equivocate, to hesitate, to be unsure while wishing for a harmony that he can only occasionally attain. He is everywhere faithful to himself. He has integrity and yet he is, in his submission to power, corrupt. This paradox is, I think, one of the key points of the novel.

One more thing. While Shostakovich is the subject of the novel, there is to it a silent witness: Osip Mandelshtam, the great poet murdered by Stalin. The Noise of Time is the title of Mandelshtam's own beautifully written memoir. And Barnes follows Mandelshtam's example by writing in brief sections – some no more than a sentence or two long – that are, at times, as vividly imagined as the prose poetry in Mandelshtam's Noise of Time. Mandelshtam is an abiding presence in Barnes's novel, all the more moving for being unnamed, for being just offstage, a constant desolating memory.

Julian Barnes's The Noise of Time is thoughtful, humane and compassionate even when it is – as it seems at times – exasperated by its subject. But its true beauty is in the impression it leaves of Shostakovich's distress and humanity. For my money, it's a great short novel, somewhere between Barnes at his most playful (History of the World in 10 ½ Chapters; England, England) and his more straightforward (Arthur and George). Although, to be fair, in Barnes's best work, the playful (or fanciful) and the straightforward are separated by a thin membrane. 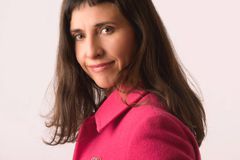 Review
Review: Lindy West’s Shrill is a work of intelligence, humour and empathy
May 20, 2016
Follow us on Twitter @globeandmail Opens in a new window
Report an error Editorial code of conduct
Due to technical reasons, we have temporarily removed commenting from our articles. We hope to have this fixed soon. Thank you for your patience. If you are looking to give feedback on our new site, please send it along to feedback@globeandmail.com. If you want to write a letter to the editor, please forward to letters@globeandmail.com.
Comments